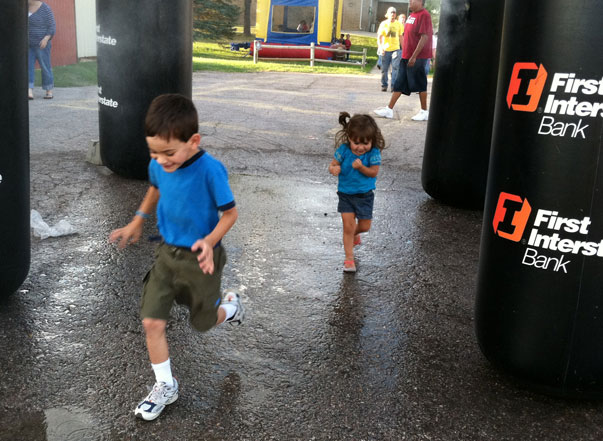 Top ‘o the Monday to ya! How was your weekend? Ours was grrrrr-eat.
– We got out of the house before 10 on Saturday. A minor miracle.
– Purchased a gallon of paint for the kid’s room ( “Pearly Gates,” if you must know. Photos to come later. . . ) for $4.25. $4.25!!!!! That’s about thirty dollars cheaper than retail. Plus, since we bought it at the Restore, we helped out Habitat for Humanity at the same time. Thriftiness AND generosity in a one stop shop. Booyah!
– We found all but one of our 60+ library books and got them in ON TIME.
– Came home with over $50 dollars in books that we didn’t pay for. An illustrated guide to Lord of the Rings (and that seals our fate as geeks FOR-EV-ER), the LOTR trilogy in one book, Pilgrims Progress with the inscription “Christmas 1892” on the first page and so many more. We’re pretty sure our “friend” at Again Books cut us a deal. (Thanks Julie! Thanks too, for letting us use the potty. Disaster averted!)
– We took in the Central States Fair parade. Who doesn’t like checking out the destruction derby cars?
– Ran into the Browns afterwards and had a nice chat. We LOVE that we can run into them these days.
– Everyone got naps both days. Such a needed blessing.
– Plowed through our leftovers. Mom? For all the weekends I complained about leftovers? I am so sorry. You were right.
– Made it to the fair to check out how the kids faired (ah ha ha ha! I kid. . .) with their entries. Big winners! More about that later, too. (Or, if you want a spoiler, visit Jac’s Facebook account and his fair album. He likes to pre-empt my blog posts. It’s cool. I know where he sleeps.)
– Watched Nacho Libre with Jac and the Shiatsu massager. It was bliss. As a result I realized that:
– The pregnancy laugh has returned! Yessssssss! Best pregnancy related side effect. So glad it’s here!
– Bathed the kids the night before Mass. Made for such a smooth Sunday morning. Then I leaned over to kiss Philip on the head before Mass and realized we forgot one. Whoops. Not sure how that happened. . .
– Woke up to blueberry muffins ( and cinnamon strudel) baking. Jac rocks.
– Made it to 11 am Mass early. We were shooting for 10:30, but I’m still counting this as a win.
– Even though the people behind us at Mass were super distracting, I was able to really enjoy the liturgy and pray. I watched parents around us losing it and thanked the Lord that at least for today, that wasn’t us. It was nice.
– had an extremely successful chonie weekend with Ellie, having only one accident at home. Even through the night without a pull up! Wish the accidents had been as few with Monday. . .
– we celebrated the anniversary of Hawaii’s statehood with chicken on a stick and fresh pineapple. Delish.
– finishing out the weekend with painting the kids room. I’m taking a breather while Jac knocks out the last of it and the kids have a camp out downstairs. It’s a win win I think.
Here’s hoping wherever you are and whatever you did with your weekend, it was awe-shum.