I’ve attempted to write this post twice now, but exhaustion has gotten the better of me and I’ve scrapped them both.

The short of it is this: on the First Sunday of Advent we got our tree. In the snow. People were cranky and unimpressed with “tradition.” (People being mostly Jac and Lu). But we piled on the layers and loaded up and set out on crappy roads with crappy attitudes anyway.

Sometimes you just have to soldier through.

But then we passed very few cars on the way into the hills and the snow and heavy skies made everything quiet, including our hearts and minds. 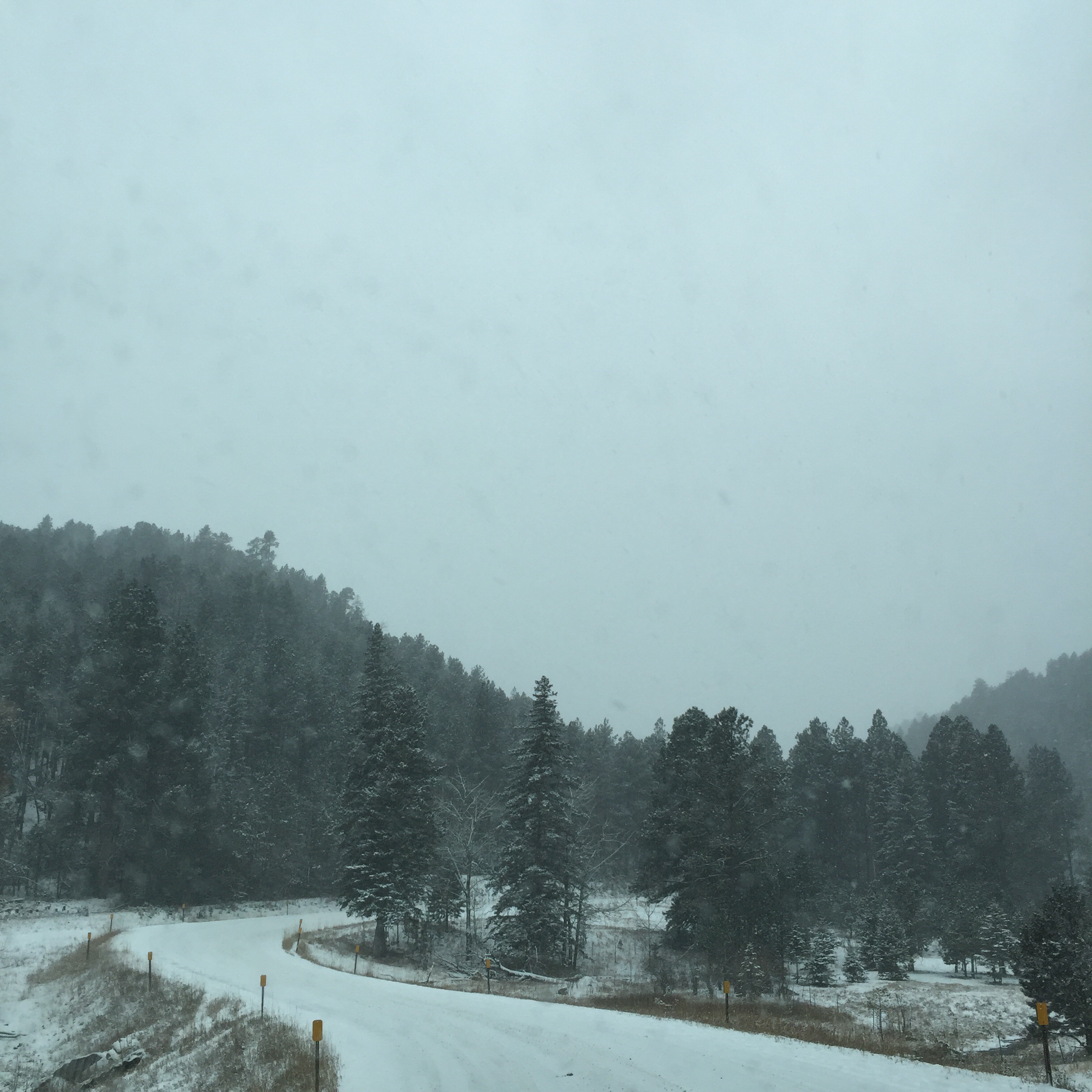 By the time we arrived at our usual spot, we were all in better spirits and ready for our adventure. (Well, all of us except Gemma who never wakes cheery and needed a little encouragement to get started but she came around.)

We had brought our decorations and ornaments for “the aminals” including two large pumpkins that have been chilling (literally) on the porch since Licy’s birthday. It was quickly decided that instead of decorating a tree across the creek, we should probably choose a close one. 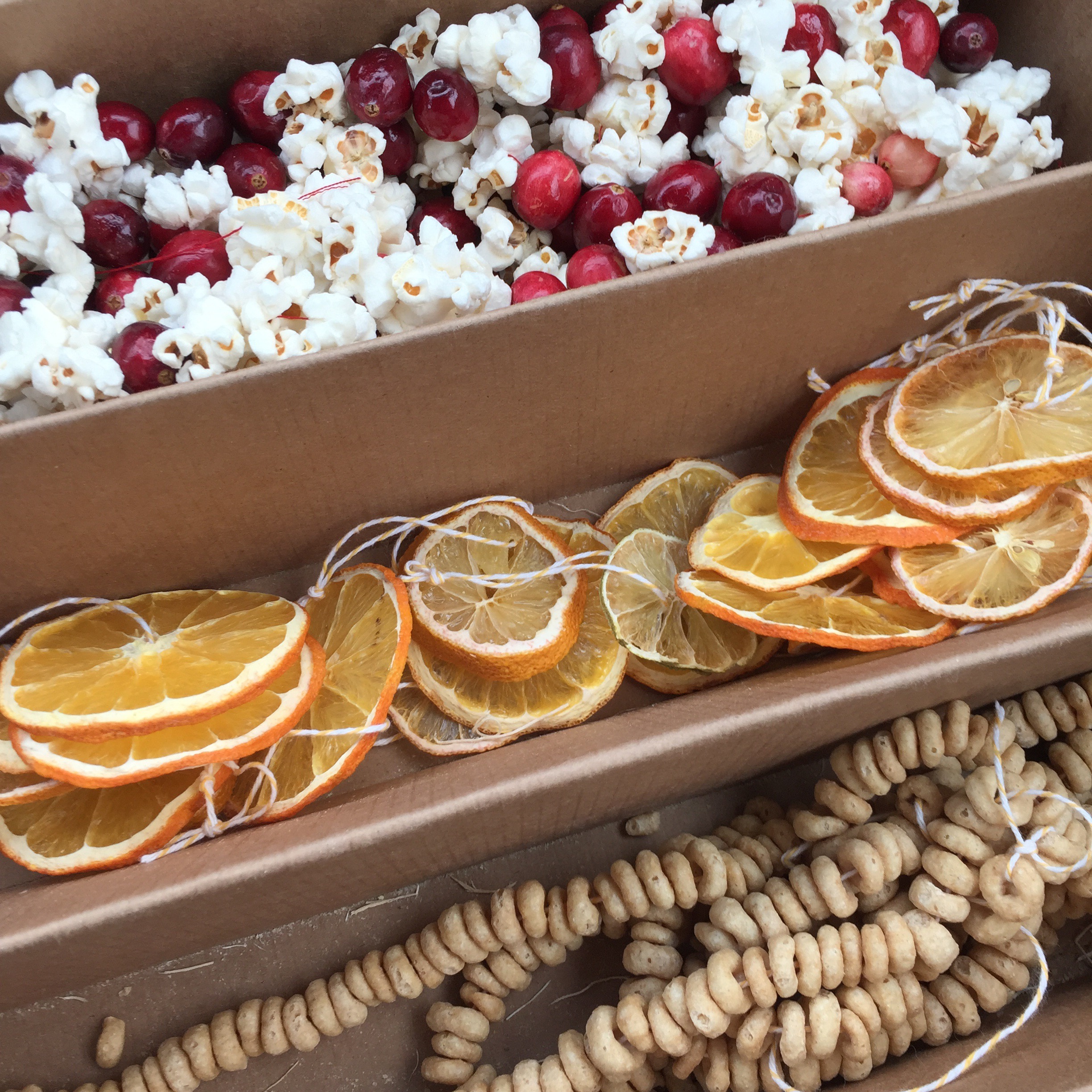 The boys (and their father), relished hacking the pumpkins to bits to make them more accessible to creatures great and small while the girls worked hard to string our decor. Doing anything in mittens, in the snow, is difficult, you see. 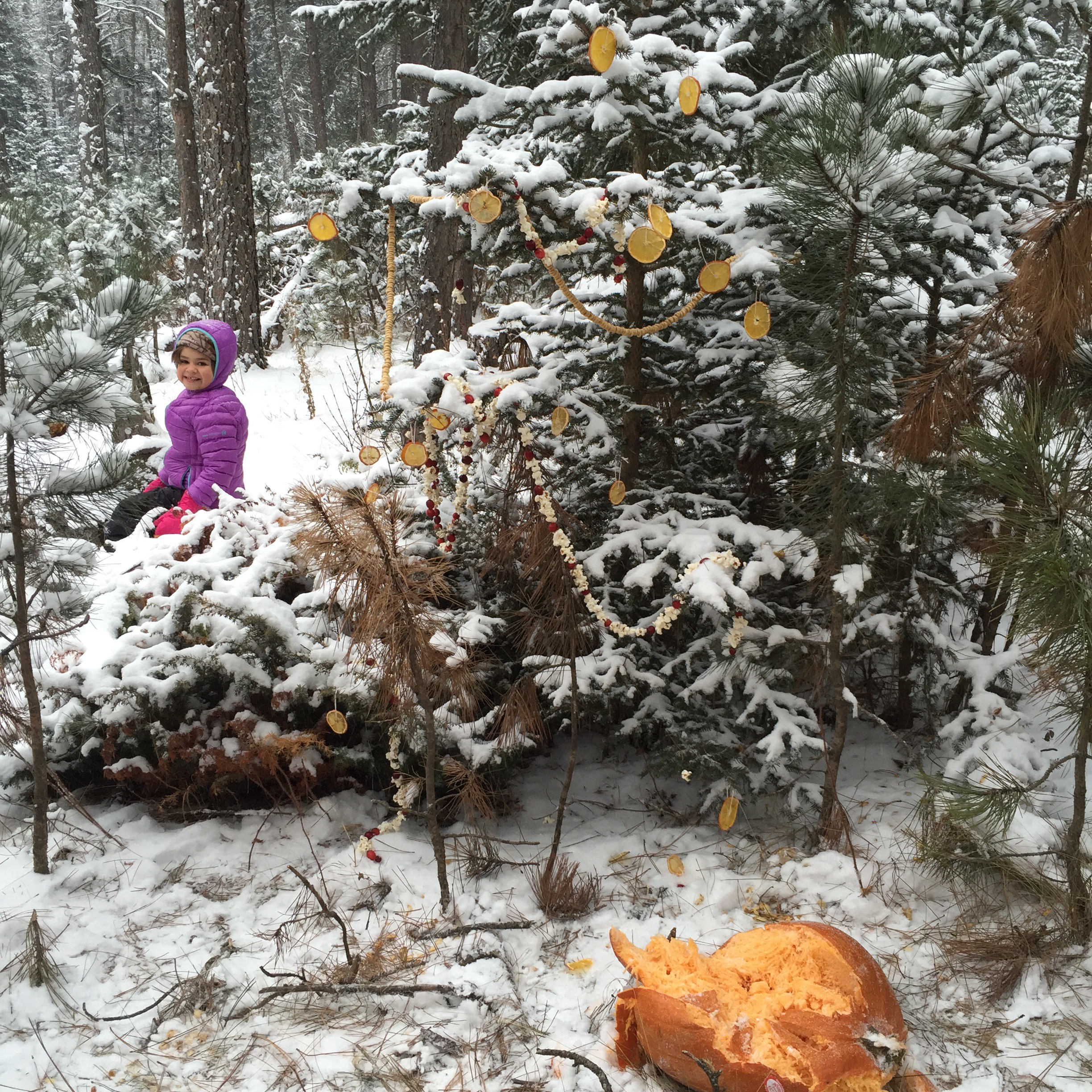 When we had finished, we went in search of Jac and the boys and Tess who had trail blazed before us with Monday leading the charge. Lucy in the backpack, Gemma by the hand and Ellie happy to be on this trip for the first time in her life made for an interesting decent. Along the way, Gem kept pointing to scrubby Ponderosa pines and declaring they weren’t big enough to put our presents under. Sister’s got her priorities down. We met at the creek which looked questionable so Jac went ahead to try out and clear the ice. 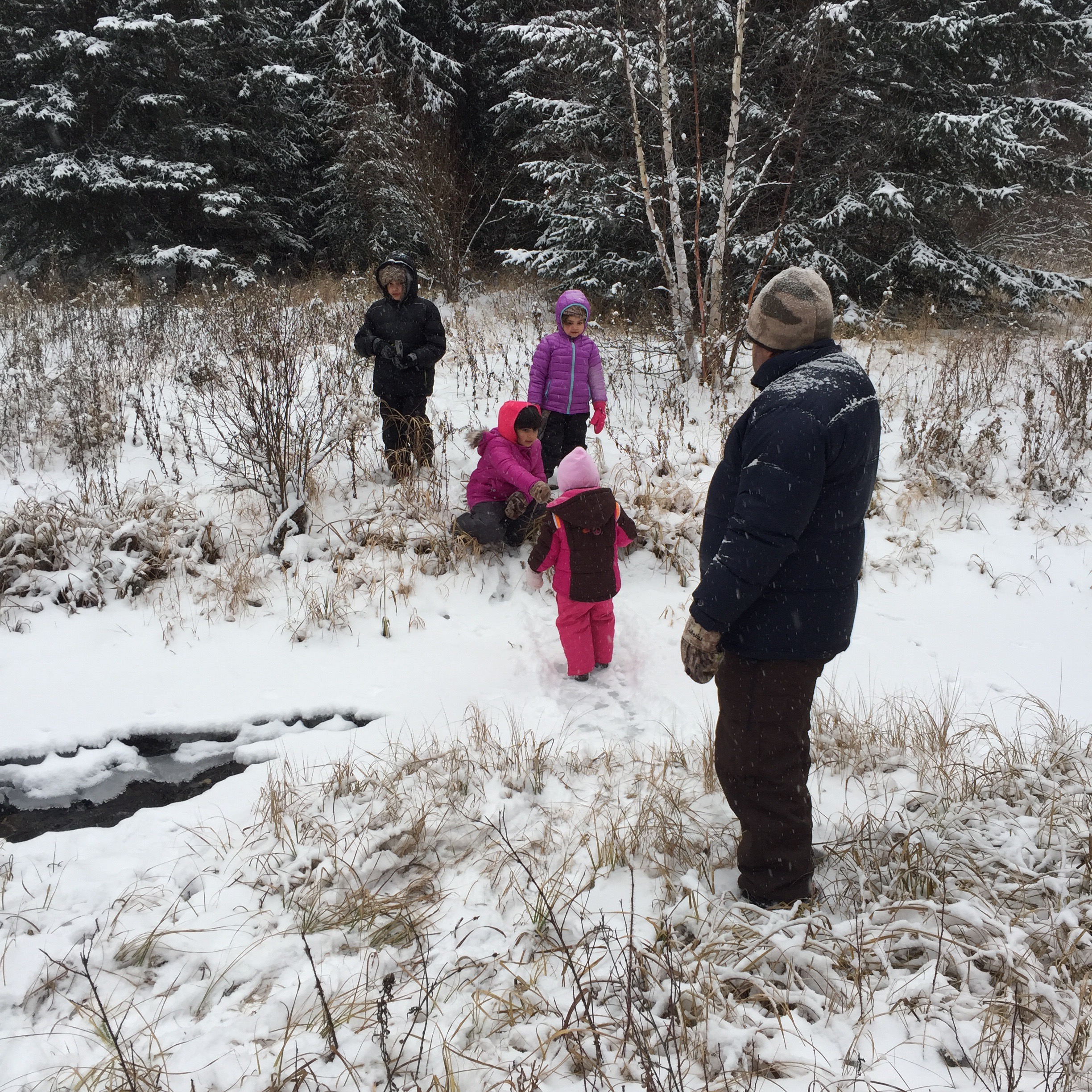 We made it across without incident and, wouldn’t you know it?, there was the tree, right in front of us. Yes, we looked to the sides and poked around a bit, but the first one we had seen was clearly a winner. Snow, it turns out, makes it easy to see the outlines of the trees.

What it does not make easy is the cutting. 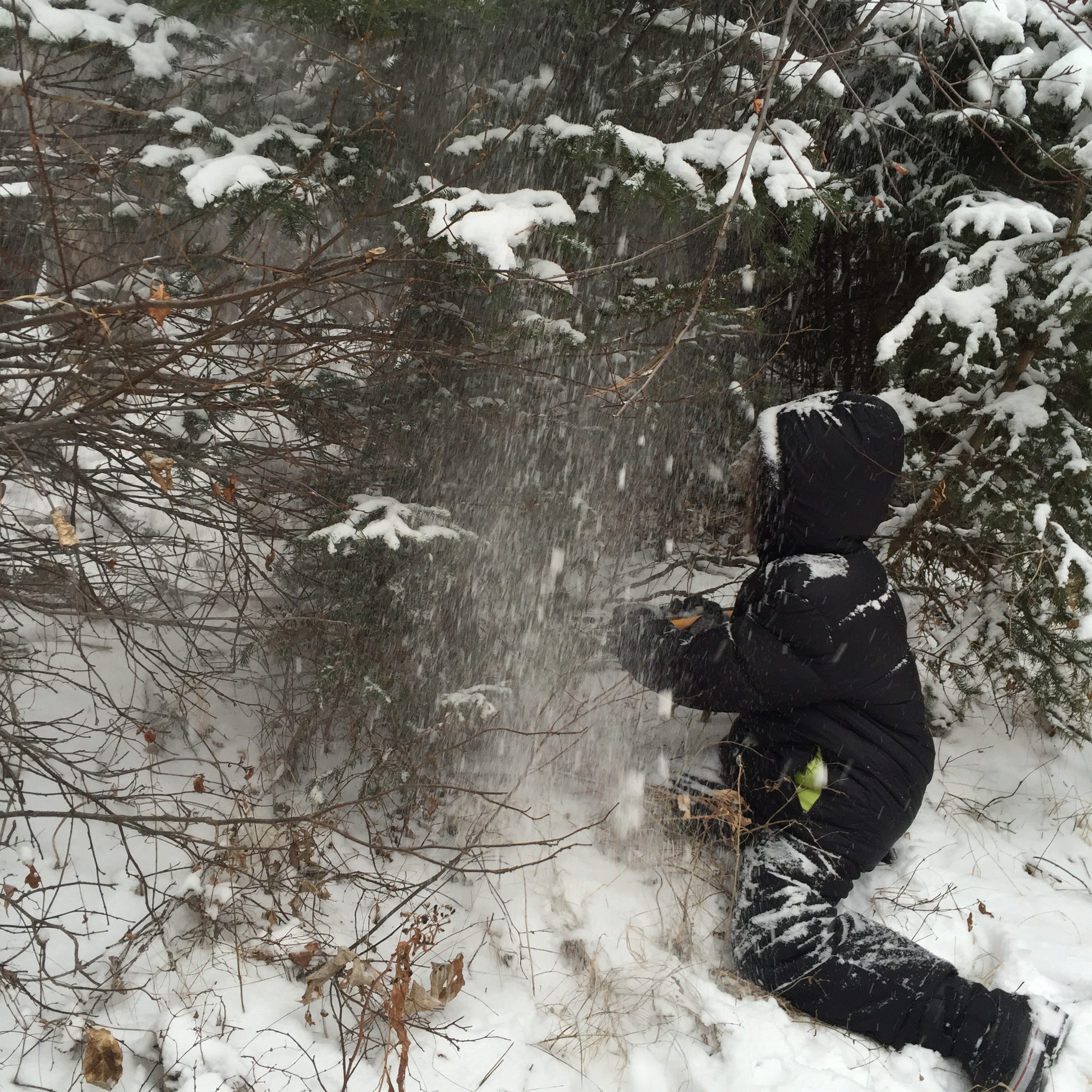 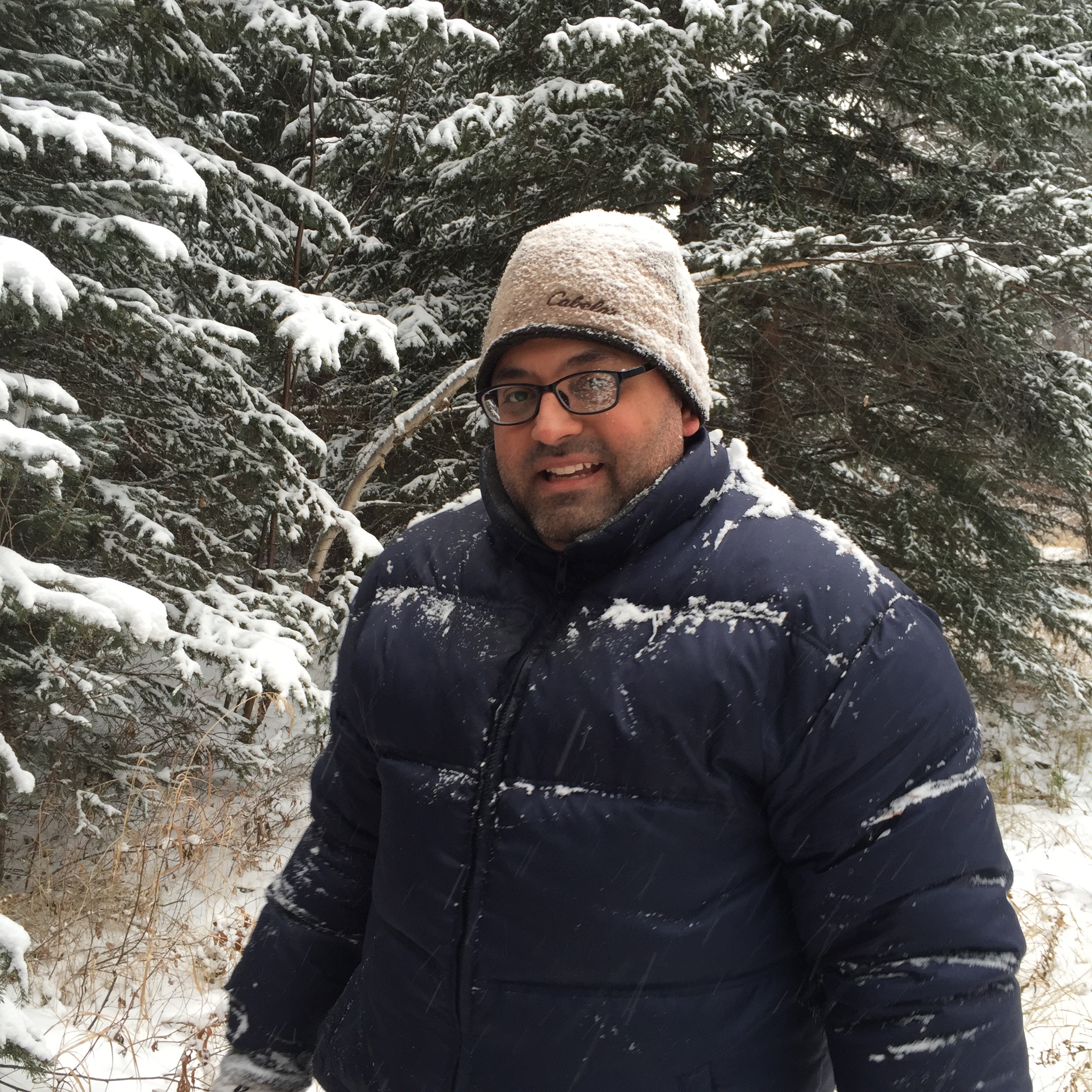 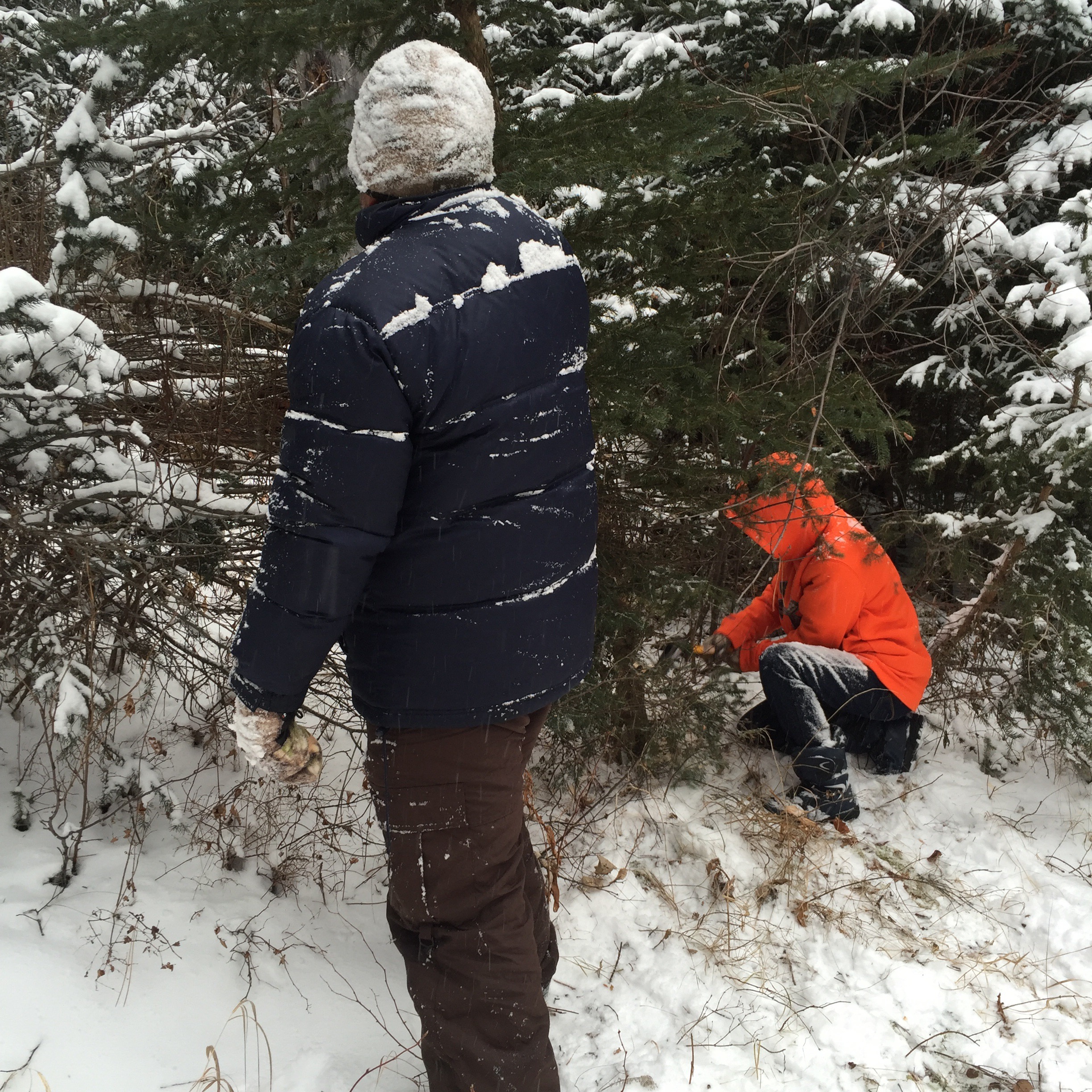 Poor Phil- he jumped right in to start cutting and every blow sent a sheet of snow down on his head and in his face.

We laughed and everyone took a shot. From the backpack Lucy chirped, “My turn!” and we all assured her she would get a shot at home. 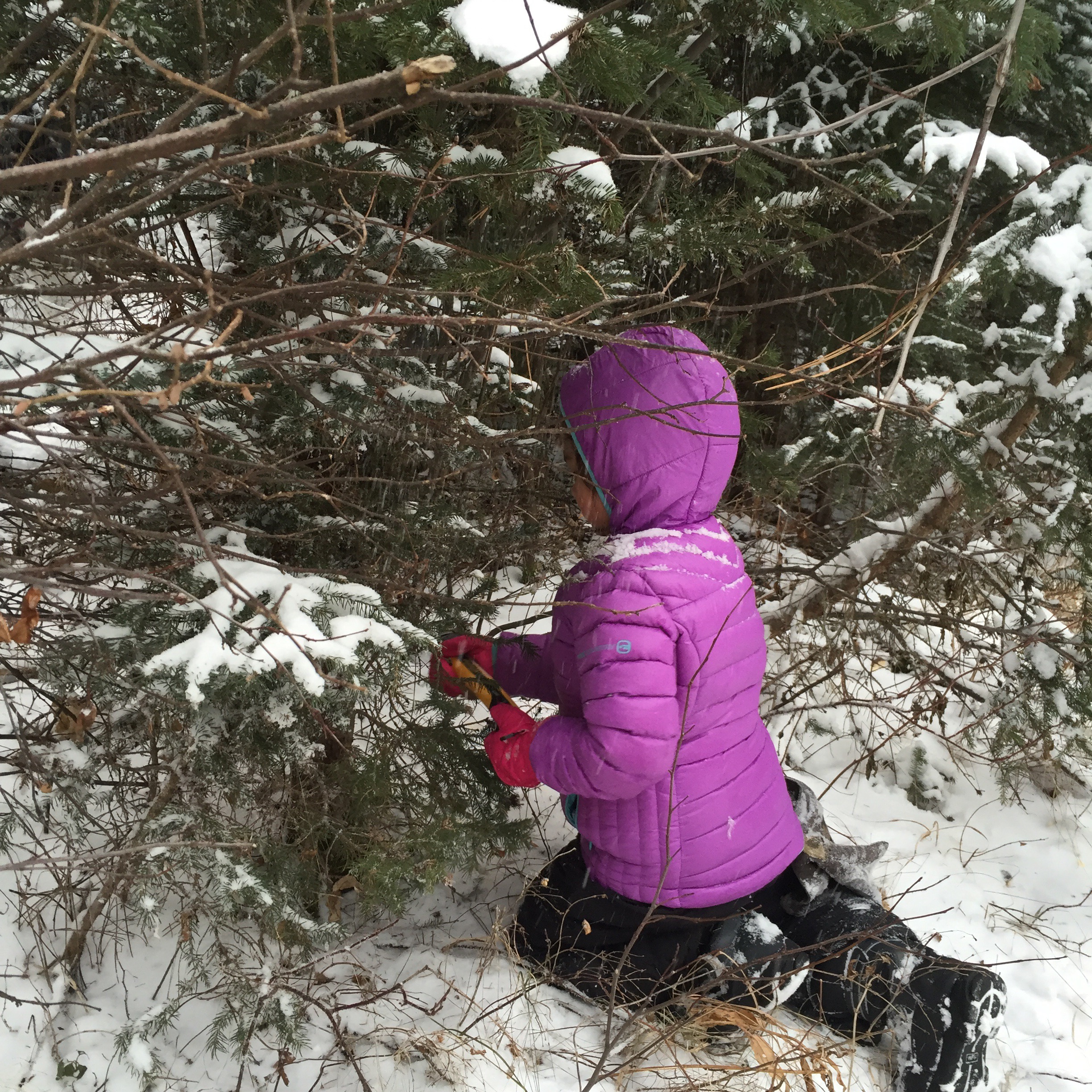 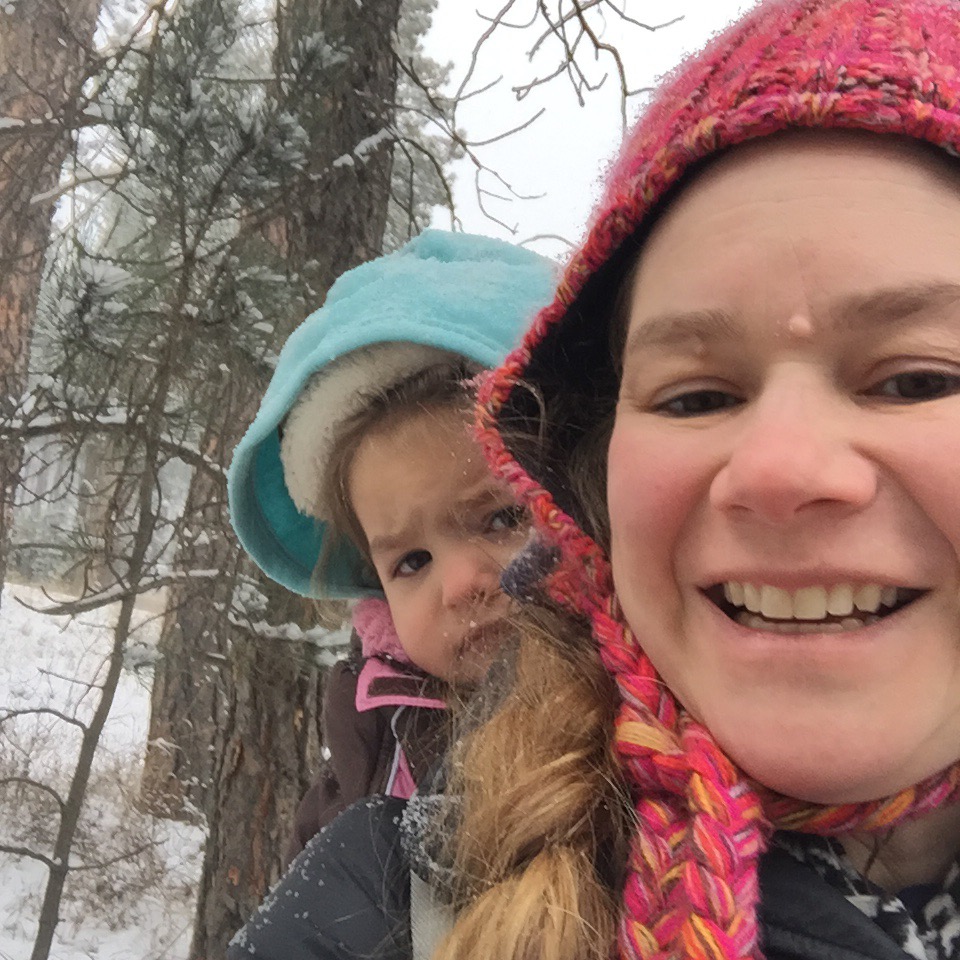 While some of us worked to trim a bit from the bottom (so it was less Griswald-y), the rest tromped about exploring. I kept repeating to stay away from the creek and to not play on the ice. Then I saw Gemma there and when I called her back, she panicked and freaked out. Max was right there and he helped her from the edge but she spent the next 10 minutes telling everyone how she was stuck on broken ice and Max saved her.

Then the tree was ready and we all were, too, (Lucy at this point was tapping my shoulder persistently and saying rather continuously, “Cold, mama. Cold! Mom!!”). Max Ellie and Phil shoulders the tree and Tess took charge of Monday. Jac held Gemma’s hand and I brought up the rear. 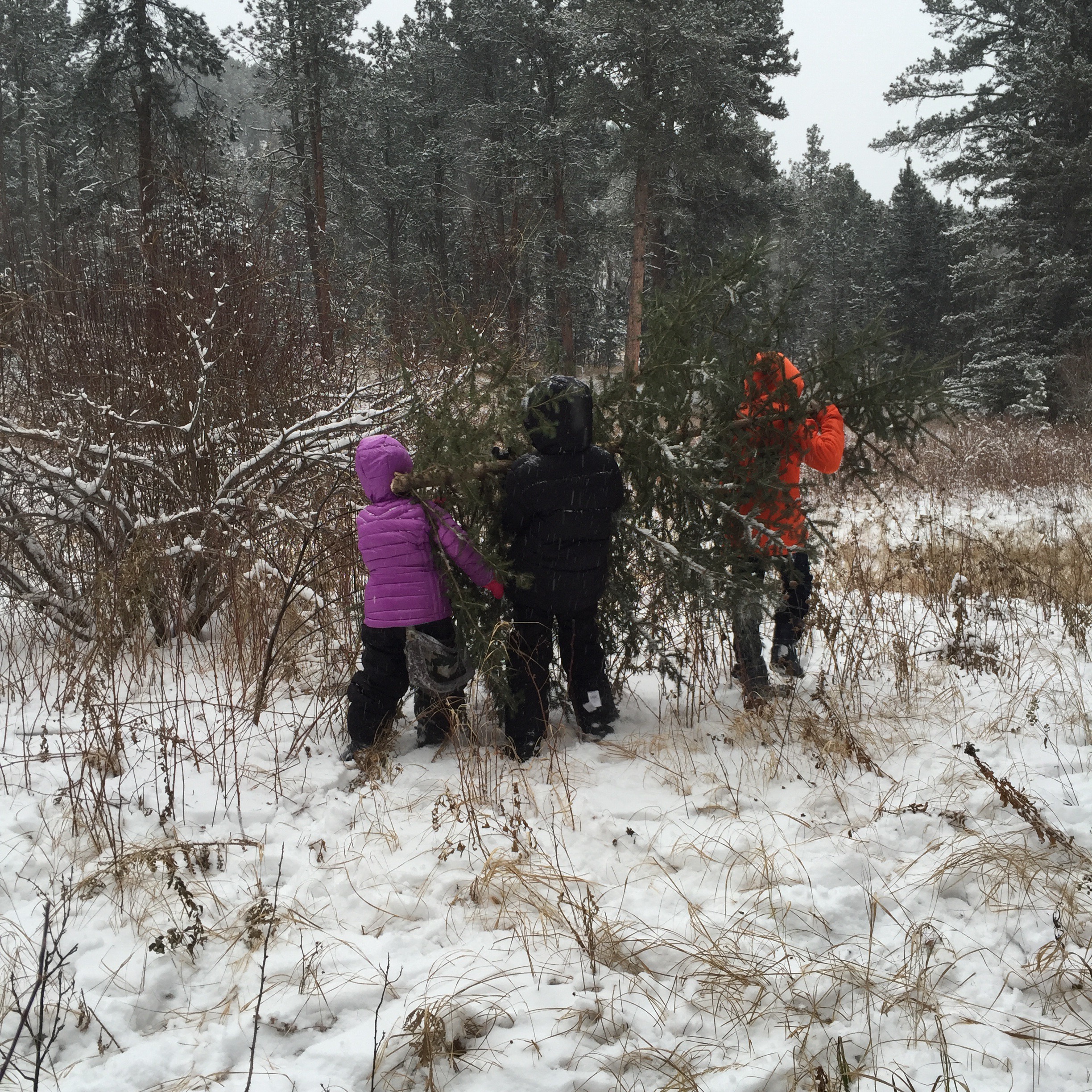 Jac was in the middle of explaining to Gemma why playing on the ice wasn’t a good idea and they were one step away from the bank when the ice gave out. The amazing dad that he is, Jac managed to toss Gemma up and free of the hole even as he fell. She started to cry out of surprise and fear and I was asking if they were okay. Jac was stunned and pulled himself free and onto the ice to collect his bearings as he had been up to his knees in the water.

I’m sure he’d take issue with the “calm” part.

Jac made it to Gemma and got her moving while Lu and I went upstream for a better crossing. The eldest and youngest of our family sure we’re glad to leave that creek behind us! By the time we reached the suburban, the tree-bearers were inside and Monday was fighting to make her way in.

On went the tree, the car and the heater. Off came hats and gloves and good attitudes. It was time to head home.

When we all were inside and removing boots, Jac found that his socks were barely wet as his boots and snow pants had done their job. God is good.

We prepped the room for the tree and, as everyone has stripped down, I offered to bring the tree inside so they could trim it inside the warmth of the living room. 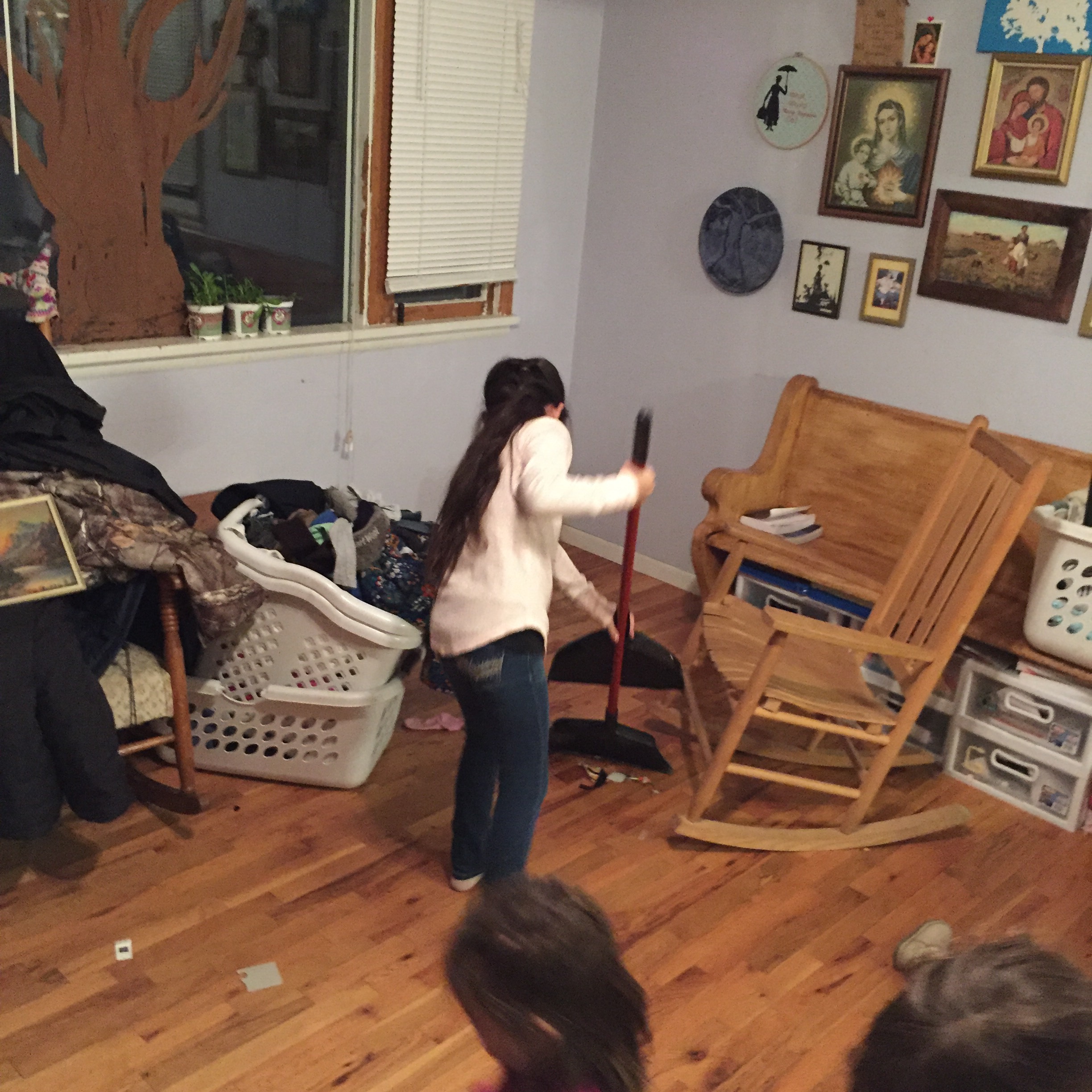 “That way Lucy can have her turn and I’ll clean up whatever mess it makes.” 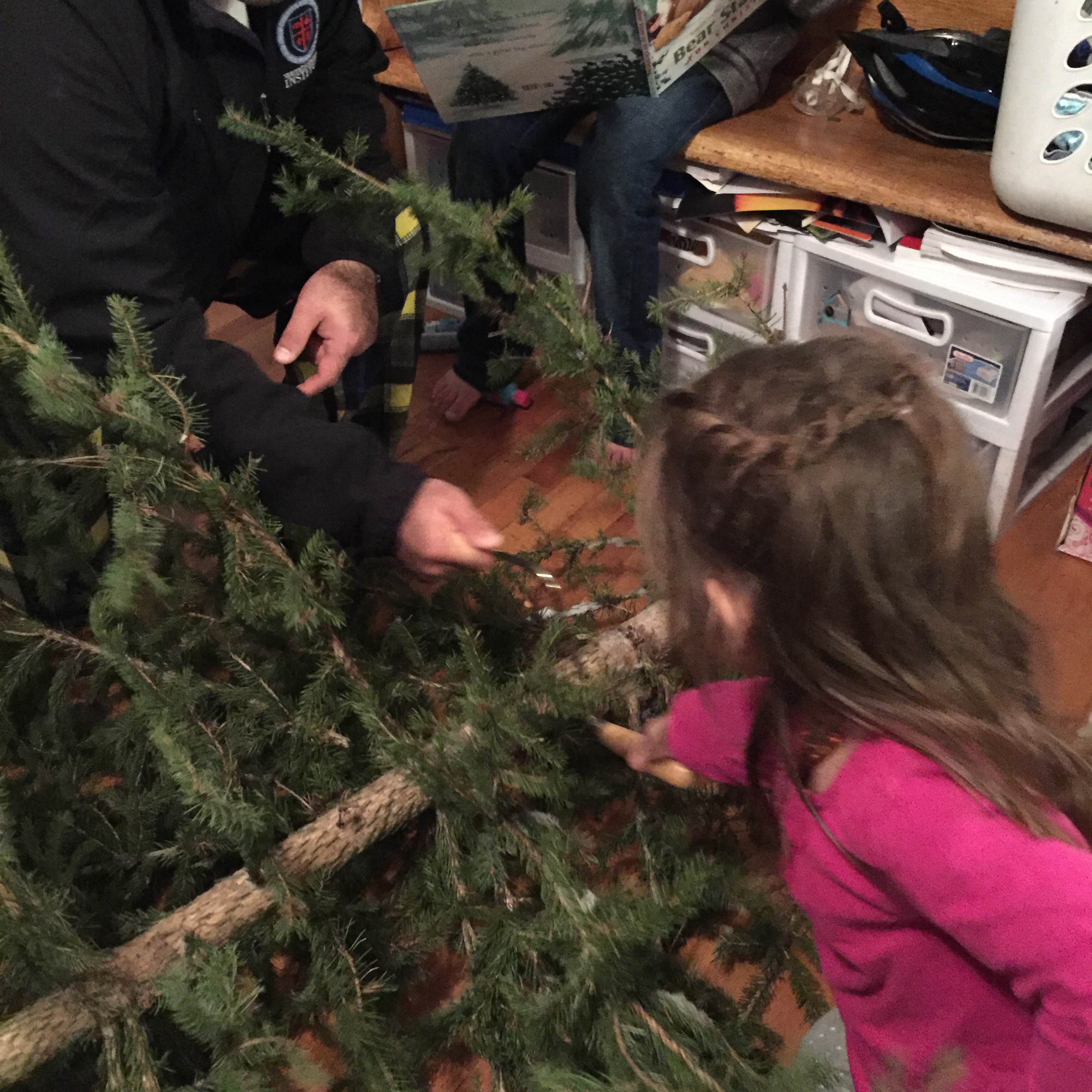 A power saw was NOT what I had in mind, but it did the job with little sawdust.

Gemma announced she never wants to go back to that place agai- EVER- and Lu is afraid of the tree because it’s pokey. But the tree is a beaut and we have another adventure for the telling. Tradition!