The Eleventh Day of Christmas

We left Salida late on Sunday and only made it to Winnemuca, Nevada the first night.  So we woke very early (before first light!) to try and gain some ground.

Things went well for an hour or so.  Then it turned into this: 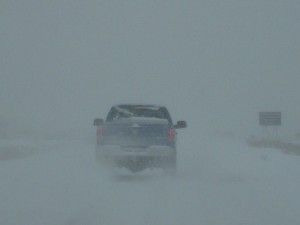 This was our view through the majority of Neveda.  A huge round of applause to Jac who battled through the worst of it and got us through it alive.

Thankfully, the Wasatch on the other side of Salt Lake were clear, though it was snowing in Park City when we stopped for lunch – big, fat, fluffy flakes.

Wyoming went smoothly until we got to Rawlins where the wind was brutal.  It greatly improved our gas mileage but added to the stress on the dark and slick roads.  From Independence Rock to Casper was a sheet of ice and we were pretty spent once we made it into the city limits.  Our cell phones were dead and the kids were getting antsy.  we made the call to stop for the night, check the weather and see if we could make a break for it early the next morning.