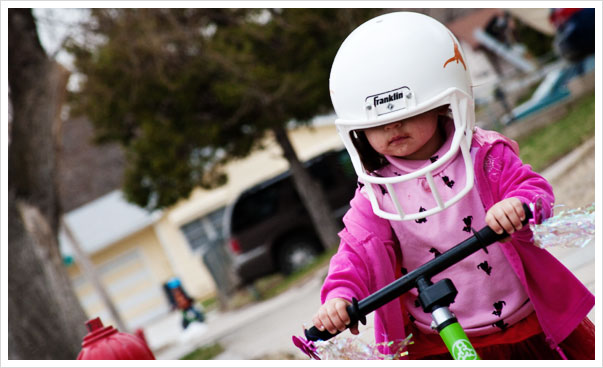 (Yes, that is a Texas Longhorns FOOTBALL helmet on the “princess’s” head.  Her helmet has been misplaced, eaten by the garage.  I was okay with her being bare headed – she rides bikes like an old woman with a walker – but Max crashed into her and we watched as she happy slam-danced her face on the side walk and Jac announced “I’m getting her a helmet.”  And he produced THIS.  Sometimes something is better than nothing, right?)

Okay, aside from the fluttering handlebar tassels, the flowers and the tutus, Tess sets herself apart from the boys once again even on her wheels.  She is cautious, slow and careful where the boys have always been daring, fast and reckless.  They have a need for speed that has not entered into her person.  They take great delight in crashing into others and yelling as they do so, “Rule number 2!  Don’t run into people!  Ha, ha, ha!!”  She dissolves into tears if they come too close, abandoning her bike to seek sympathy and comfort.  That’s not to say she isn’t tough.  Oh, no.  Those who have made her acquaintance know she can hold her own.

I marveled over this fact as the kids rode bikes this week.  With Max receiving new wheels for his birthday and the other two getting new accessories, they have been rabid about being on their bikes.  Thankfully we’ve had some decent weather and Jac has been generous/brave enough to handle them out and about.  He converted Max’s Strider into a ride for Tess and she gave it a go for the first time.

She crept down the sidewalk.

The boys, meanwhile, were careening all over the place, looking for puddles (LOTS of melting snow) and trying to crash into each other.  And they kept riding up onto people’s lawns.  This was NOT okay.

We kept hollering for them to watch where they were going and to stay off the grass but to no avail.  We pulled them off so they could do hard time alone on the porch steps, but they were unfazed.  I was losing my cool and yelled at Philip as he rode 4 feet into the neighbor’s newly green lawn.

He stopped and looked at me, both feet firmly planted in the sod.  “It wasn’t me!”

Tess was a completely different story.  In the time it took her brother’s to destroy all the lawns on our side of the street, she had moved maybe 9 squares down the side walk.  I called for her to turn around and she struggled with the concept.  Did I mean to back all the way up?  Maybe I meant she should get off and come to me.  No wait, that wasn’t right.  Perhaps she should drag the bike back.  Poor girl.  I went to help her and showed her how to turn the darn thing around.  Then I walked next to her.  As we inched along, periodically she would brush her front tire up against an overhanging blade of grass.

“Oh!  Sow-we!” she would appologize to the grass.  “Sow-we Mama!”  she would cheerfully exclaim to me.  Then she would very carefully scoot over to the center of the sidewalk and resume her “riding.”

And that, my friends, is the difference between the sexes.

Below are more photos of the kids on their wheels.  Gooood times. 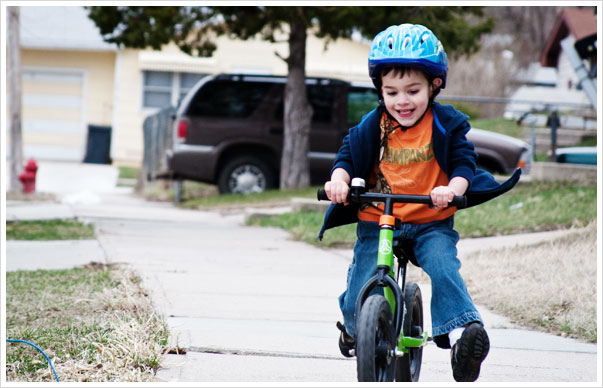 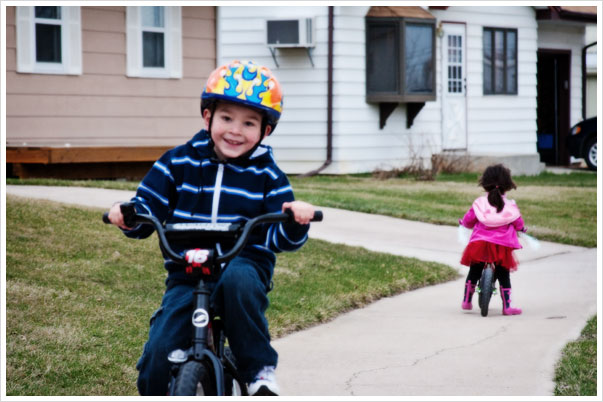 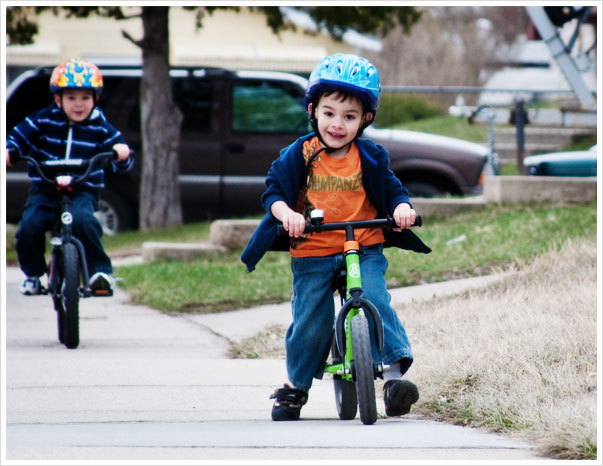 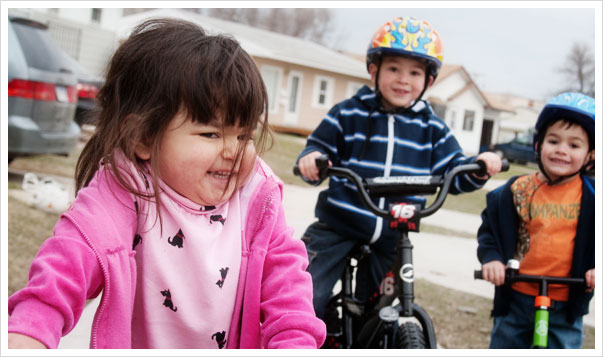