The Holidays are upon us.

They tried hinting at it in July, but I wasn’t buying it.  Halloween came – and then went – and they screamed all the louder.  We watched Christmas commercials as the polls closed on Election day followed swiftly by lit trees in living rooms on Veteran’s day. Still I scoffed.

However, this weekend arrived with all of it’s stuffing and snow and other good things and I will admit that really, truly, the holidays are here.

It’s not Advent – not quite yet!- mind you, but the ‘holidays’ in that vague-yet-specific sort of way, have arrived.

Looking into December, they quickly add up – birthdays and feasts and Holy Days of obligation.  And that’s what these Holidays are, right?  So much more than the Big Three of Thanksgiving, Christmas and New Years.  No, they are all that and everything in between.  Those Holy Days, the days set aside for real people, real traditions, THOSE are the Holidays.

We started it off with a bang, I tell you. There was jalapeno stuffing and Susan’s birthday to kick things off.  Then came the parade of lights.

Now normally I am a full blown spectator.  I like being a fuzzy face in a wide audience.  But this year the Scouts were asked to preface the parade, be the warm up if you will.  They were asked to collect food from the crowd as a commercial for their big food drive over the next few weeks.  It fulfilled a belt loop requirement for the boys, was something we encouraged for the pack and had the potential for fun.

Or at least I thought it did.  Jac?  Not so much. While I envisioned something akin to joyous adulation for such a charming thing as little cub scouts, Jac imagined jeering crowds and dunce hats for us as we made our way through Rapid City.

We compromised.  Jac in that we went at all and me that the boys pushed a sad shopping cart with ill placed twinkle lights and  droopy tinsel.  But we were there! And boy, did we have fun. 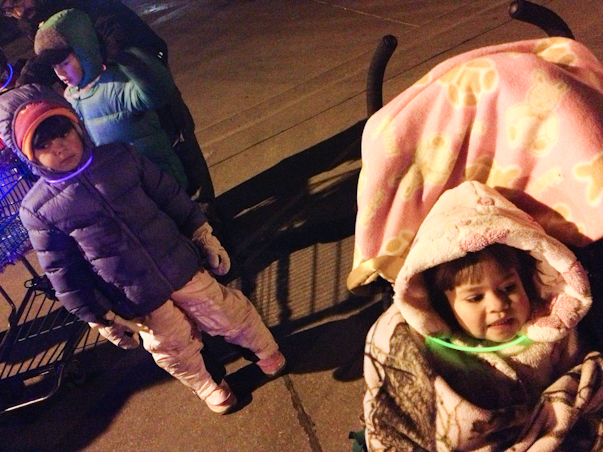 Ellie was giddy that it was her first time being in a parade and the boys practiced the Be Prepared motto by bundling up to within an inch of their lives.  Within a block of hoofing it, they were roasting.  We were roasting. Turns out you crank out a sweat when you’re trotting behind a shopping cart. Or a stroller.  Or carrying 20 lbs on your back. 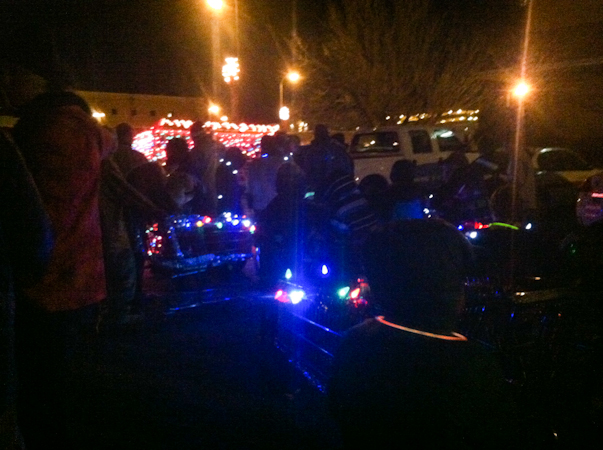 The boys were fearless and eager.  Ellie waved magnanimously from the stroller.  Tess valiantly kept the pace for a good 10 blocks and Gemma thought the entire affair was for her.  People waving? Sparkly lights? Being in the backpack while mom jogged? “This is the best day of my life!” her wiggles and yells and waves seemed to shout.

In the end, we lead the charge and then parked on a curb to take in the entire parade from start to finish.  It was chilly, and loud and absolutely perfect.

Yes, the Holidays have begun.  Let the fun begin!