The only time I’ve purchased a Christmas tree from a store was the first year we were married.  Jac suggested that since we were traveling to CA, perhaps we didn’t need one.  But I was pregnant and emotional and insistent.  I didn’t care if we were leaving in the morning, for crying out loud! (which we were, by the way.)  My loving husband drove me to Safeway, bought a tree, strapped it to the car, took it home and let me bask in it’s glory for an evening.  That’s how much he loves  me.

Since then, we’ve taken a different approach, purchasing tags to go out and cut one down for ourselves.  We’ve tried to plan ahead and usually it works.  We’ve hauled Max on hip to find the tree in a campground (just found out that’s a no-no) and take family photos.  We’ve trecked through deep snow with both Max and Philip on backs with the Wyeth kids to find one at Iron Creek.  Last year we left late in the afternoon and searched for a tree in the dark and hauled it home inside the van with 3 kids in car seats – not the best idea but certainly memorable, right?

This year, Advent was upon us before we knew it.  We will be leaving for CA early this year so I really wanted to get the tree before Jac left.  In addition, we do a Jesse tree ornament every night – the kids wanted a tree to hang them on.  Off we went, Tuesday late morning to find a tree.

(Keep in mind Jac had to leave the house by 2 pm and we had not packed him yet. ‘Cause that’s how we roll.)

First step was we drove out past Canyon Lake, past Johnson siding all the way to hwy 385.  No tree. (It must be a Spruce tree – no ponderosa for this gal!)  We followed 385 to Trout Haven with me imploring the kids to start praying we’d find a tree.  I scrounged up a map just as we saw a sign for Nemo and we were off on a dirt road/snow track.  We passed a beautiful farm with red barns and black cows in the snow and came into a beautiful patch with the creek close to the road.  The Motherlode!  Jac stopped the car and he and I got out, stepping into ice crusted snow 6-8 inches deep on the flat parts.  Oy. I knew I should’ve put on the kid’s boots.

Then there was the creek – it had to be crossed.  We looked for a suitable place to cross, but none could be found.  At a place where it was about 3 ft. across, Jac took a kangaroo-style leap across and made it.  We decided to make a go for it.  The car was parked, kids unloaded and the saw prepared.  At the crossing, I held one hand and they spanned their bodies across the water while Jac held the other hand.  I am happy to report that no one got wet! 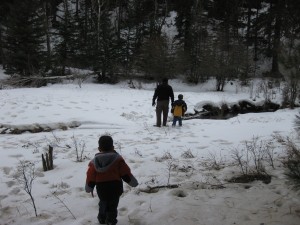 The finding of the tree proved tricky.

We had to climb over a few downed trees and through some deep snow. On the way we saw birds nests and followed deer trails.  And the kids we still cheerful!  Then we found it.

Jac and I agreed it was the perfect tree.  Max protested that it was too small and that we needed to keep looking.  Tess wandered away to fall in the snow.  An executive decision was made to get this tree and Jac went to work to bring it down.  Max refused to help, but Philip was enthusiastic.

Back through the snow we went.  My shoes were full of it, Philip’s legs were caked and I did my best to hold Tess when I could.  Then came the creek.

Jac leapt across and reached over to help Max.  We decided that Jac would come back and I should cross at a place where some rocks were “sticking out” – my husband’s description, not mine- and I would help the little two get across with the help of Jac.  He would toss them across to me.

And then he did. 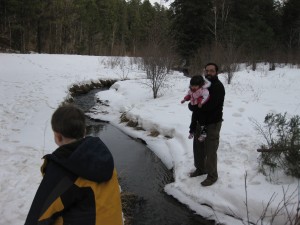 Both of them flew up through the air while my mouth hung open.  While Tess had no idea what was about to happen, Philip had watched her and became adamant he wouldn’t go.  Then he was in the air.  Each of them had wide eyes and spread out their limbs like flying squirrels.  I am so happy to report that I – athletically challenged though I am – succesfully caught them and again no one was wet.  But there were some tears and a good deal of laughter.  At that moment I felt very much like my mom, but refrained from saying, “See!  Isn’t this fun?!?!” for fear of my children screaming “It’s not funny!!!” like I used to in similar situations.

The tree and kiddos were loaded up and strapped down and we made it back to Rapid with planty of time.

The response? Philip: “I want this adventure to be over.  I want to be home.” – as we drove through Rapid.  Max: “I thought the tree was going IN the car!  Whew!” And the drive up tellers at McDonald’s declared the tree “tiny.”  But it’s up and has 4 Jesse tree ornaments on it and I still think it’s perfect.  Best one yet!