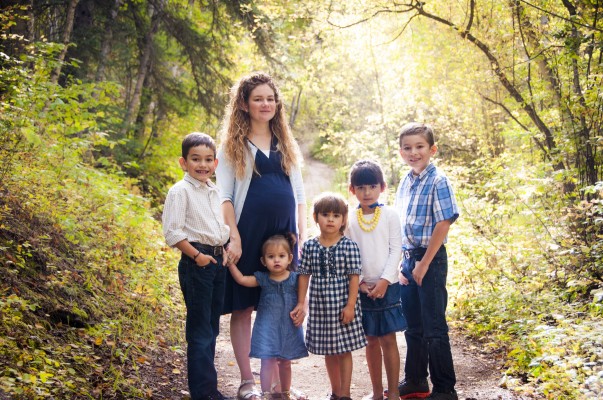 Do you like how Sixtus is is over-shadowing Gemma? I do. And how about Tess and Ellie's expressions? Welcome to my world.

Jac whisked me away for a date over the weekend.  Sure, he had ulterior motives (i.e. walking this baby out on non-business days) but there was the knowledge that this would be the last outing for a while that would be “just us.”

Ooh, I get weepy at the thought.

We went to the mall first in search of “nursing items.” After wandering the racks in Penney’s we finally asked the perky teenager in the Minnie Mouse outfit if they had a maternity section. “Uhhh . . . ” She honestly didn’t know.  Her equally young co-worker made her best sad face.  “Weeeee doooooon’t.  I’m sooooorry!” Pouty lips and everything.

I was stunned.  Jac thanked them and grabbed my hand to lead me away.  “You could try Motherhood, you know.” they suggested.  How helpful.  We passed 2 witches folding merchandise on the way out the door and Jac muttered, “What? They don’t believe in babies around here?”

We went to Herberger’s next.  Same scenario but when we asked their help, they were cheery and optimistic in tone.  Yes!  Right over there!  We were directed to four shirts and four pants.

Jac kept me laughing as we made our exit.  We passed a mother and teenage daughter who stared blatantly at my belly and swung wide as if my “condition” were catching.

My poor husband.  He was flabbergasted and only became more so as we encountered more of the same treatment all evening long. I was less affected. Not because I didn’t notice but because I’ve become desensitized.

People who ask if we know how this happens instead of offering congratulations take the first layer off.  Then there are those who want to know if we’re done “yet.” Add to that folks whose eyes bulge and jaws drop when they ask if this is our first and we announce it’s number six. Finally, the “You poor thing!” and pitying glances when the troops and I go about our business and, well, it all loses it’s potency after a while.

At the moment, when we are out in public with all seven of us, we get a lot of stares.  I groan inside. “What will it be like when there are 8 of us?  What then?”

It was the midwife that bought me back to reality.  I was fretting about the state of my home, my children, my school, my hair (so important), my marriage, my life when she stopped me.

“You are that woman.”

It was like a mirror had been held up.

I let her in on a secret then: I’m not sure I know how to be that woman.  All I know is a home with two kids in school all day.  Somehow I keep trying to fit that model, that image, onto this woman.

“Forget it!” she said. “Are you kidding?  How much would you get done if those sweet children of yours were in school? How clean would your house be?  How much time would you have to breathe and think and be? But that’s not you and it’s not God’s plan and it’s not where you are. Your life is noise and busy and constantly together and it is hard.”

I gulped and gave up my attempt not to cry.

“It is hard.” she repeated quietly, “But just because it’s hard, doesn’t mean it’s not worth it.”

Those words.  They were meant for that woman God has called me to be.  They are the battle cry and motto and theme song Jac and I have been repeating since we became a “we.”

Things worth doing/having/being, require hard work.  Jesus never said things would be easy, only that it’d be worth it.

Tonight, I feel defeated.  I’m exhausted and hurting and sure as can be that this baby will never come.  There is much left to do on my lists but life is too full with other things to take care of them and I am too tired to attempt it.  This makes me feel lazy and like I’m not cut out for this.  However, I also knew it would come to this point and yet – and YET – we were open to life anyway and God sent this blessing.  And I wouldn’t trade it for all the clean floors or smooth gaits in the world.

And so I hope and pray for a little sleep so things don’t look quite so hard in the morning and ask for the grace to become THAT woman.  The woman I’ve been called to be, the one my husband sees, the one my children need.  Even when it’s hard because that’s when it’s worth it.