I don’t know why I expected something like Keystone or Columbia set in sand, but I did.  I was not prepared for it’s beauty, it’s art scene,  it’s captivating charm.

We arrived laaaaate to our campground – this one was not as nice as the night before but had beds and that’s all that mattered. Uncle Billya nd Aunt Lindsay met us to wish us a good night and plan out their day with Mama Syd and Papa Chris that would start early the next morning.  All told, they were gone for 13 hours which left us to explore the Capitol on our own.

We awoke in the morning to shower and ready ourselves for the trip into town.  Wrangling 3 girls and myself in a public shower all at once was not my idea of fun, but we all survived and ended up cleanish, so that was a plus.  Back at our cabin we were visited by a monster Rottweiler who seemed to think the kids were the best thing ever.  Jac was wierded out but the rest of us kind of liked having a fan in our midst. 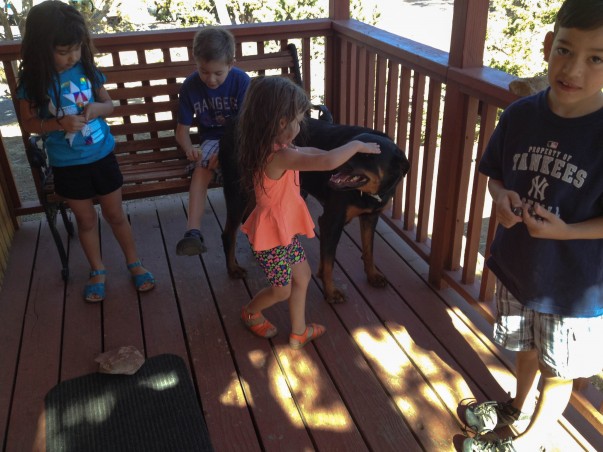 For a second day in a row we delayed breakfast but we promised “Piggies!!” in return.  Google maps led us to a muy authentico Mexican bakery with a tiny abuela who didn’t speak English but was accomodating nonetheless.  And seriously?  The BEST concha of my entire life was purchased there.  Soft, flavorful and sugary – I ended up with a lap full of buttery cinnamon goodness.  I’d go back just for that. (Breakfast is my love language, remember?) 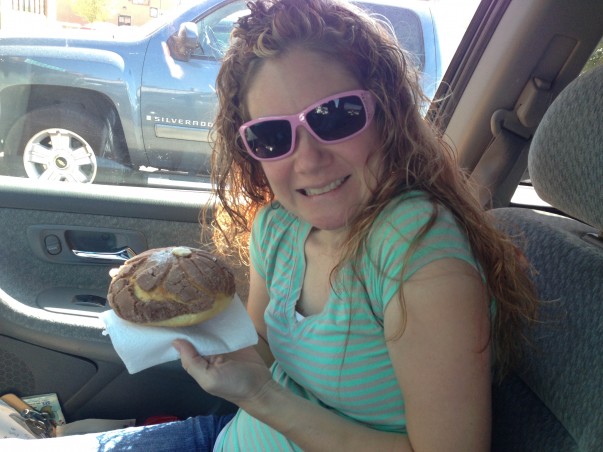 From there we headed downtown, past the capitol building (only one in the nation that is entirely round!  Like a hogan – look it up.), and through the museum neighborhood.  Parking is at a premium in the tiny, historical streets but we managed to snag a spot in the shade! behind the Cathedral.  This church and the Chapel of Loretto with it’s miraculous staircase were our main goals for the day so we set off. 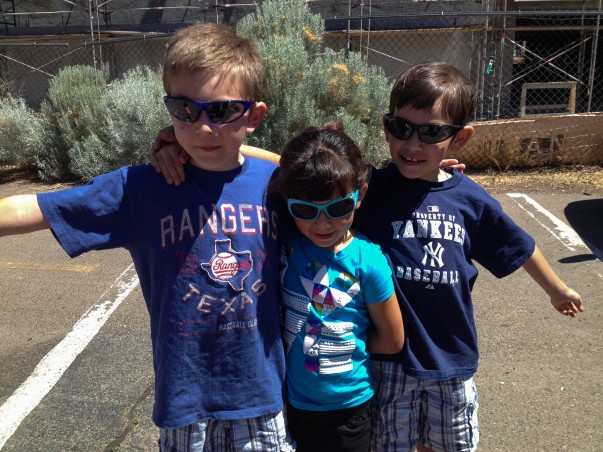 We wandered through the lovely stations of the cross garden where Gemma shouted “Jesus!” in friendly recognition at each and every station. We walked around to the front  where the kids recognized St. Francis and Brother Wolf right away and greeted the statue like an old friend.  They took the time to jog through the labyrinth and had to be pried away, dizzy and giggling. 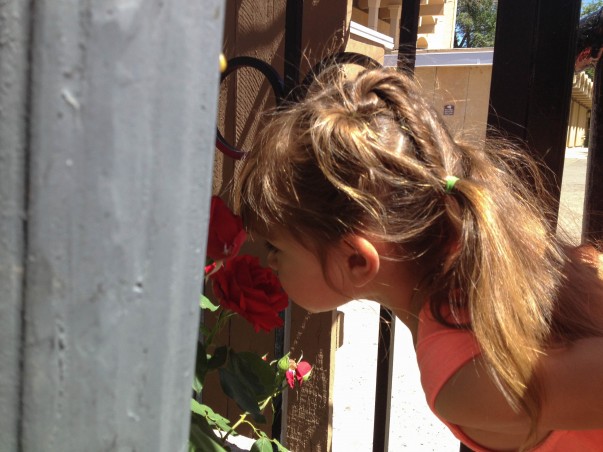 Inside the church was beautiful and we marveled at the art and pointed out the saints we recognized.  Our favorite spot was the La Conquistadora Chapel that was built in 1626.  The crucifix was brutal with horrific wounds and real hair but the face . . . the face of Our Lord was nothing but tender mercy through the agony.  It was true beauty.  The altar piece in the chapel was lovely but we were most struck by the inclusion of both St. Bernard and St. Augustine – our boys’ middle names – and placed side by side.  The reliquary case was sweet, too as it included relics from each of the five eldest kids saints and a relic from St. Maria Goretti, the patron of our wedding anniversary.  It felt like our family chapel. 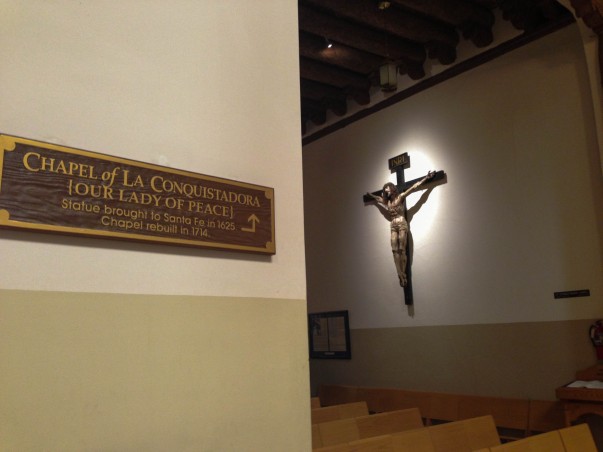 After saying goodbye to Jesus, we went in search of the Loretto chapel. We walked through some outdoor markets, past sculptures and art and wove in and out of historic buildings.  The story of the chapel is that the sisters needed a staircase to their choir loft but didn’t have the means or money to procure one.  They began a prayer to St. Joseph the Carpenter, asking him to intercede for their need.  A stranger showed up with very simple tools – a saw, a square, a hammer, a plane – and offered to build the stairs.  He refused payment and in the end, a perfect spiral staircase without any interior or exterior support was built.  It has 33 stairs (the number of years Jesus lived on earth) and does not have a single nail in its construction. It was amazing to see in person and just take in the miraculousness of it all and soak in its beauty.  Max’s eyes grew wide as he listened to the story.  “I think it was St. Joseph!” 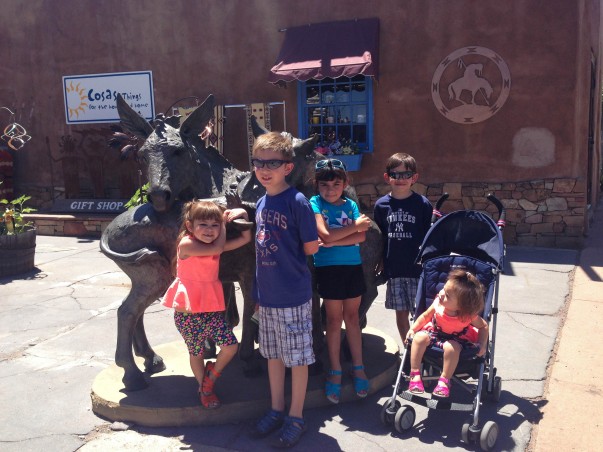 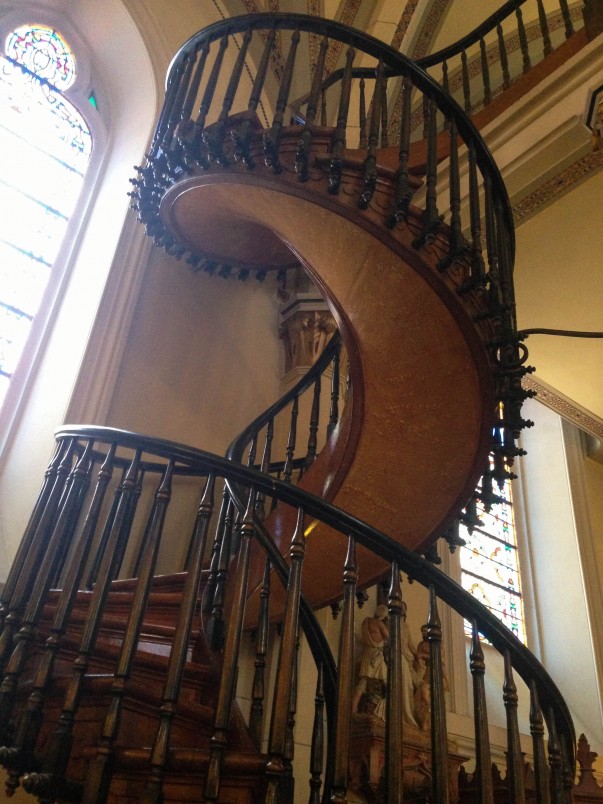 After this, we were in desperate need of some lunch and a potty and Jac thought he spied a snow-cone stand.  Did you know Santa Fe is at 7,000 ft?  You get parched real quick like.  Much to everyone’s disappointment the snow-cone man was selling fajitas.  Dang.  We walked around the historic city square, listened to some Mexican/Gypsy?  music and finally took our friend Mike’s advice and settled on The Cafe for lunch.  Open and running under the same name since 1915, it is set up like a historically accurate soda fountain.  The servers were young, hispanic hipsters in skinny jeans and gingham.  They met us at the door as we were attempting to stash the stroller behind a planter and came outside to tell us they had a place for it in the back and a place for us in the front at the window.  I liked the place immediately.  Bring on the crayons and kids coloring pages!  Chips, three kids of salsa and cups with lids!  Gemma, for the record, like the spiciest of the three and couldn’t get enough. The kids opted for soft tacos – we were doubtful they would eat them – and cleaned their plates with relish.  Jac got tacos of some sort and I opted for the best chili of my life with the spiciest sauce imaginable.  Gemma and I sweated through the entire bowl and I knew, I knew, I would regret it later. 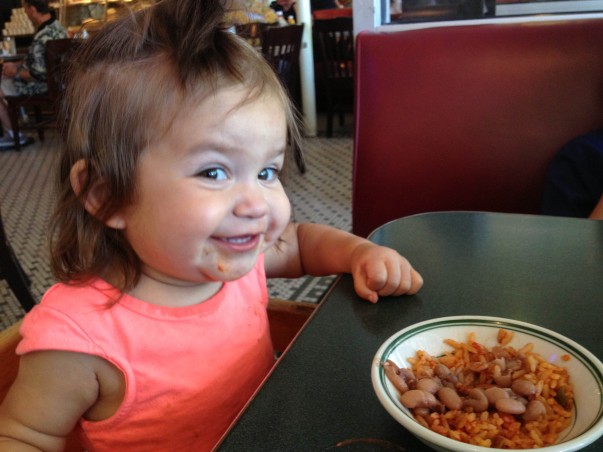 We headed back to camp for naps and such and drove back into town to meet up with the rest of our party for dinner.  That’s when lunch hit back with a vengeance.  I nearly cried at the loss of eating opportunity! 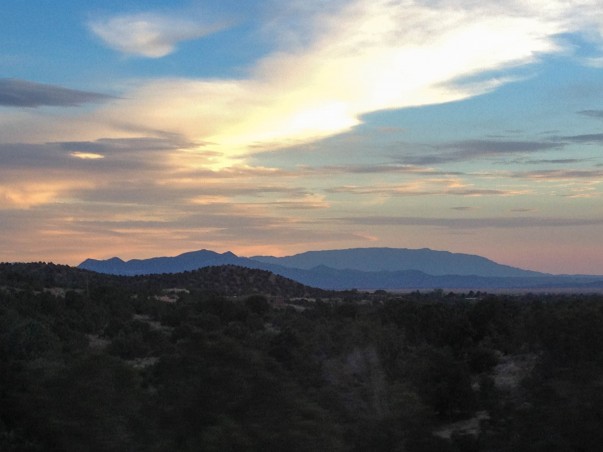 The next morning we were back downtown for breakfast at the Burrito factory (Most. Amazing. Pancakes. Ever.  Still dreaming of them.  Mmmm. . . breakfast!) and a quick tour of the Governor’s Palace and the Santa Fe Museum of History and Art.  The special exhibition was about Cowboys – Real and Legendary.  The kids loved the interactive stations and would’ve stayed for hours.  But we ran through as we all were splitting up and had different places to be in a timely manner.  After bidding everyone goodbye, we went in search of some turquoise jewelry for us ladies at the Native American Art Plaza.  A necklace for El, a ring for Tess and earrings for me and we were on the road headed north to Denver. 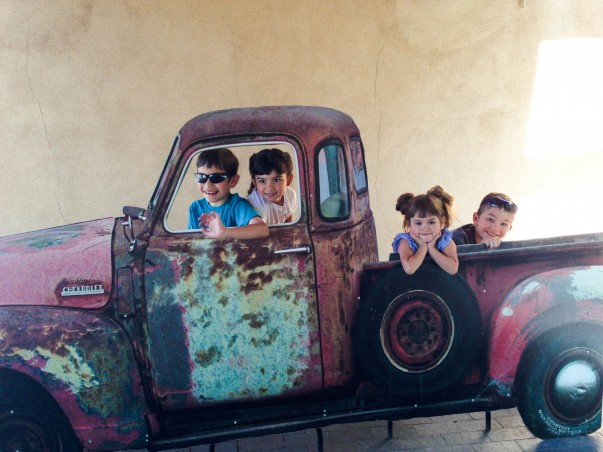 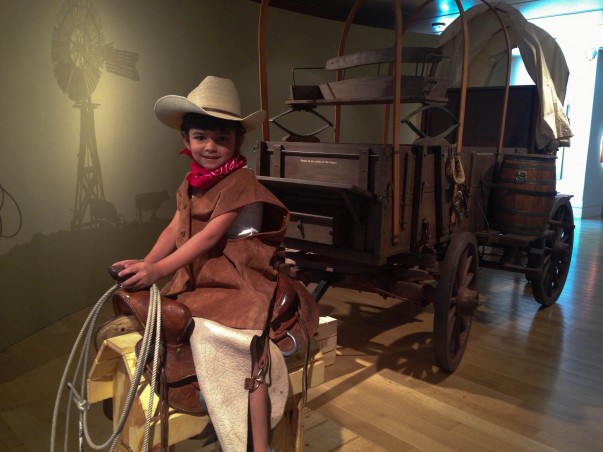 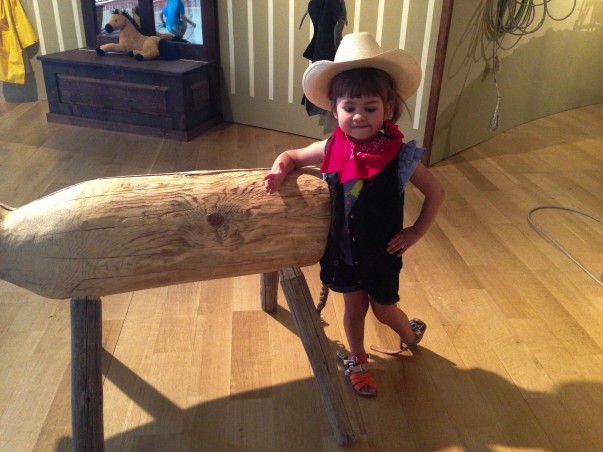 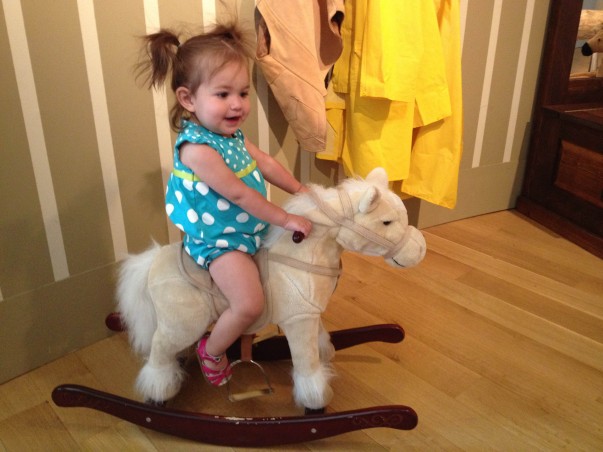 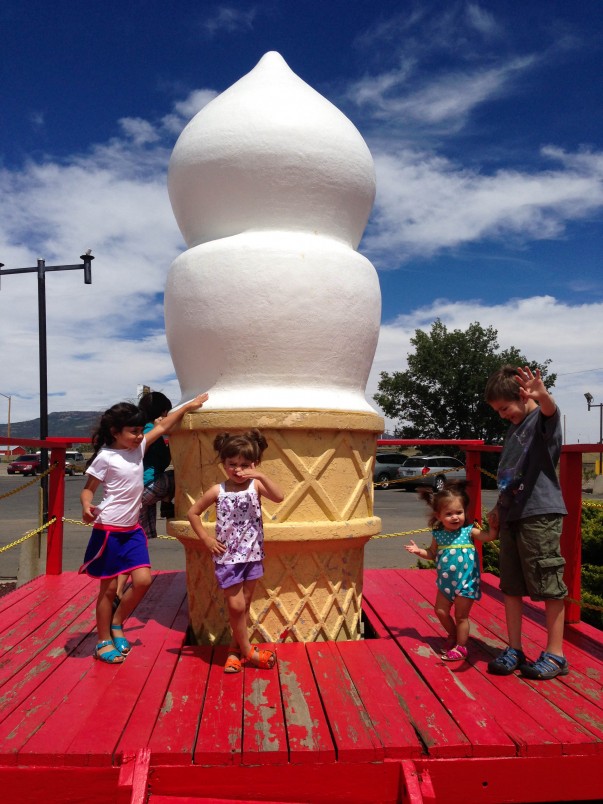 Before we knew it we would be back in Rapid with laundry and a mind set on the lake!

*Apologies for the looong post and the many trip posts. Thanks for sticking with me!