(For those of you anxiously awaiting news of the newest Daniel, the title of this post has no subliminal messages in it.  Just so you know.)

I LOVE cinnamon rolls.  Love, love, love.  I would eat them in a box, with a fox, on a train in the rain, here or there, I’d eat cinnamon rolls anywhere.

And I have. In the quad at Grace M. Davis high school for lunch.  In my VW in the rain.  In airports and malls.  At the Stanislaus County fair (hands down best cinnamon rolls EVER.).  Church basements, cafeterias, it’s all good.

But I’ve never MADE them.  Sure, I’ve opened plenty a can of Pilsburry cinnamon rolls in my day and have even tried my hand at the frozen rolls from the Family Thrift bakery that require rising the night before.  But whip them up from scratch?  Um . . .

I think it has something to do with a few bad experiences with yeast.  First, my wonderful Aunt Cristie is 1. a dietician 2. a cook and 3. a “foodie”.  She was never afraid to try anything with us in the kitchen, whatever our ages.  I distinctly remember, however, the day she brought yeast to our kitchen and went on and on about how cool it was and how it was alive.  Did she say ALIVE???  What the  . . . ?  Why would I want “organisms” in my food?  No. Thank. You.  Second, my mom was a little afraid of yeast I think.  Over rated and tempermental so we never made any bread-like product that didn’t come in a tube or bag.  Third, Mrs. Boardman, my seventh grade science teacher made us make a yeast bread for a report of sorts and the barbequed breadsticks (What was I thinking?  Always wanting to be unique, that’s me.) I decided on at the last minute (rising time, anyone?) seemed to me a disaster and an embarassment.  It was scarring enough that it has stayed with me these 15+ years and kept me wary of bread making of any kind.

The year after Max was born started this process towards cinnamon rolls.  That year we couldn’t find a sitter for Valentine’s day and stayed in.  We decided to try a Martha Stewart gourmet pizza recipe that required making the dough.  When that was a success, I kept the recipe.  Now we do homemade pizza once a week.  And, I reasoned, if 5 years of pizza dough has been okay, maybe it was time for some cinnamon rolls. 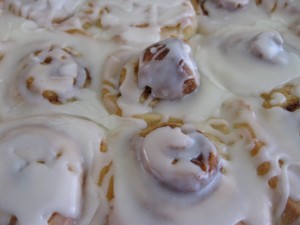 It was HIGH TIME.  And they were delicious.  I loved that the house smelled like CinnaBon and then Jacques made coffe with his fancy Italian espresso maker and the place smelled like a cafe.  Delish!  The icing on the, er, roll?  The kids thought it was amazing, too.  They helped from start to finger-licking finish and were so impressed with each step.  Success is sweet!!!

However, what I want to know is this:  It took 3 hours Friday night to mix the dough, knead it and let it rise.  Then the rolling out, filling, rolling up and rising again.  I was up at 6 to let them warm up and rise for 2 hours before we could put them in the oven (you bet your booty I took them out of the fridge and promptly went back to bed).  Then a half hour of baking.  10 minutes to cool and then frost.  Who has time for that (besides Martha and her well-paid minions, that is)?  Maybe each time you do it, it gets quicker.  I was sorely dissappointed in how time consuming it was.

But maybe, just maybe, that’s why they taste so darn good.