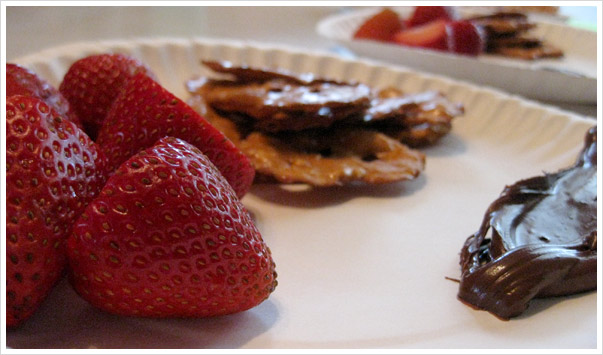 -I served this up for lunch today.  Yes. Yes I did. It went over big.

-It turns out that if you sing ‘Darth Vader’s Theme’ replacing the the notes with the word ‘Poop,’ it is a HUGE hit with the 8 and under crowd.  Try it out.

-I listened to Philip read 2 chapters of a Magic Tree House book.  PHILIP.  He is a reading machine.

-Ellie took two baths today.  She probably could’ve used 3. And she peeled off the manicure Jac gave her.

-Speaking of nails, Tess bought some orange polish with her own money. Orange, I tell you. So now the four females of the house are sporting it.  Uh-huh, FOUR.  I was out while Jac was wrangled into painting nails but I can only imagine what transpired to result in Monday having one orange nail.

-It was raining, is raining and will continue to rain.  We’re under a flood warning and it is late May.  There is some hardcore cabin fever setting in.

–Someone got into the fridge and changed the temp. Jac just found melted ice cream. I’m putting my money on Ellie.