I don’t know how it happens, the catching of horse fever, but I know that it does. I speak from experience: as a child I had a friend with horses and they were generous with their time and experiences and it was fun.  And then, justlikethat, I NEEDED a horse, longed for a horse, dreamt of a horse.

Now it’s happening again but I’m watching from the outside.

Tess was infected with the virus late last summer, early fall after the Wittes’ exposed us to a horse show and National Velvet.  She fell hard and fast and by the time we made it to CA in September, it was a constant topic.  Papa Chris vowed then that she would have a ride when we returned and Mama Syd called up connections and trolled facebook to make it happen.

We didn’t mention it to Tess until a few days before because we knew we would not be able to handle the prolonged excitement.  Poor girl, she couldn’t/wouldn’t believe it.  She kept asking us to clarify and if we were sure. Added to that was the promise of a girl’s morning the same day to go and see Augie and get the traditional haircuts and do’s.  It was almost too much.

Tess, the girl of fancy skirts and bigger means better, requested a simple hairstyle 1. To get the heck out of the beloved salon and closer to a horse and 2. So a helmet would fit.

Thankfully, Melissa and her girls were still patiently waiting in the sun for us when we were very, very late (beauty takes time, man!).  Ellie saw the magnificent horses as we walked to the paddock and promptly decided she didn’t like any of it.  There would be no riding for her, thankyouverymuch.

Her sisters however . . . Tess shyly put on borrowed cowboy boots and with excited fingers tried to clasp the helmet.  Her eyes kept wandering over to the ponies – Romeo and Lacey – and drinking them in.  This. Was. Happening. She fairly quivered with joy. And Gemma! Gemma quickly made friends with any ‘sthorsie!” who would come near and Mama Syd and I had to hold her close to keep her tiny self from slipping right under the lowest rung of the fence and into the corrals. Oy.

Tess mounted on her own and, though she wanted to take off at a gallop, was happy to hold the reins and be lead around the arena.  She watched wide-eyed as a young woman exercised a beautiful gelding and I’m sure, she wished it was her.

Far too soon for the little equestrian, we all decided it was time for shade and refreshment.  Sweat pasted her hair down at the edges but she insisted she was fine and asked, asked, asked when we could do it again.  Tomorrow?  The day after that?  Eagerly she helped to unsaddle her mount and put the tack away and I remembered how anything that smelled of horse was pleasing to one so afflicted.  We led the pony’s back to their rest, checked on some goats (that Gemma tried to lift) and had lunch under a large, flowering tree.

It was the highlight of her trip but certainly not any medicine for her love-sick heart.  I fear their is no antidote for that. 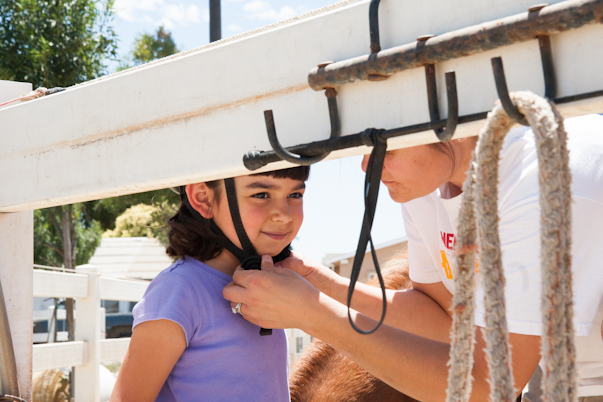 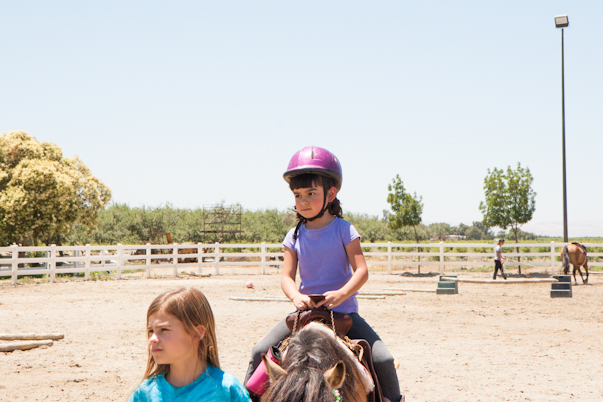 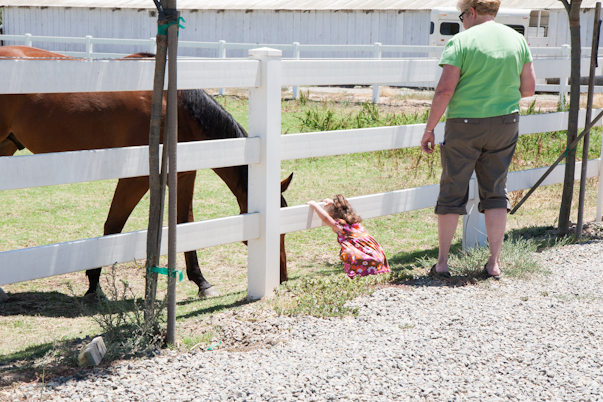 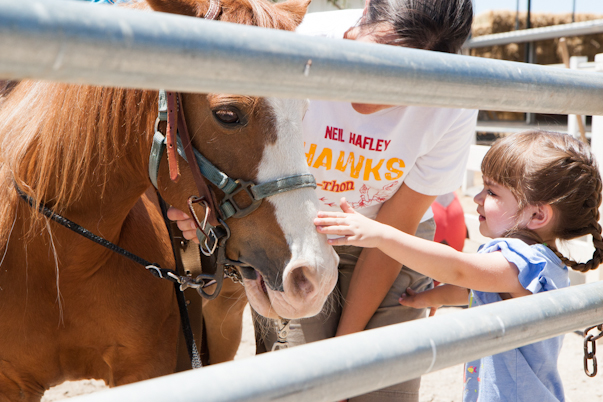 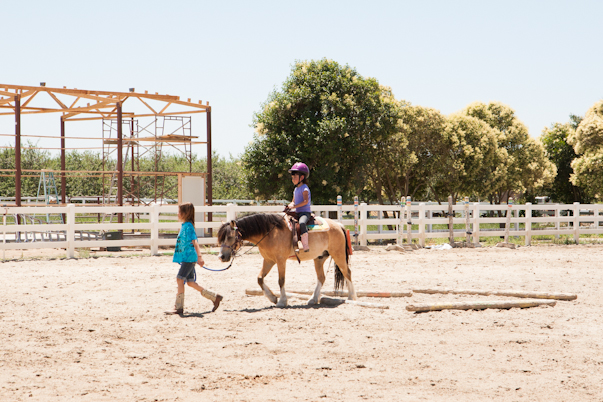 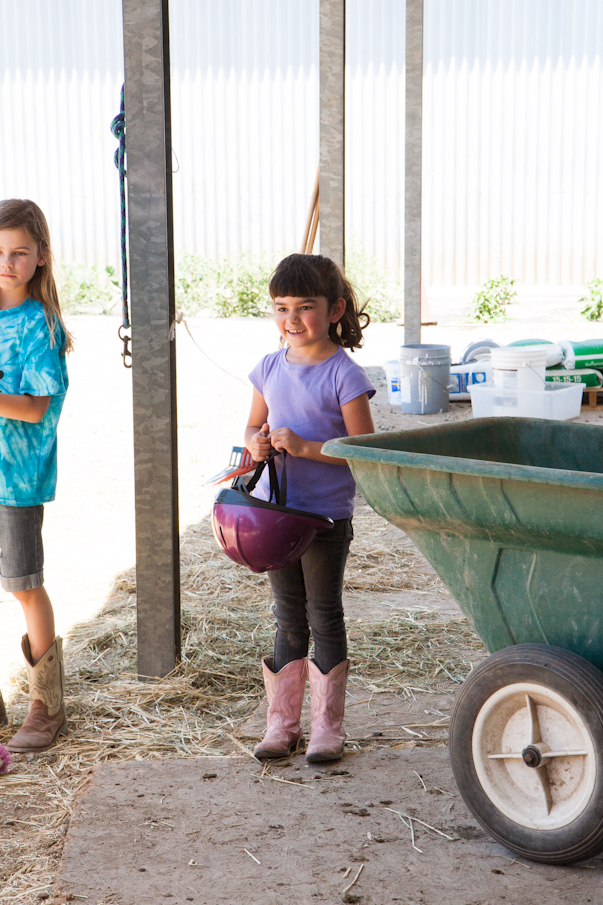 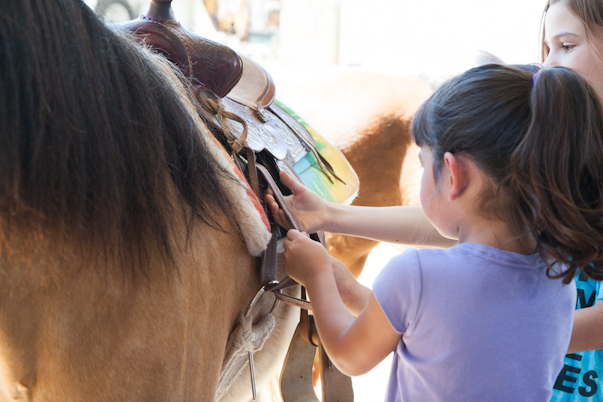 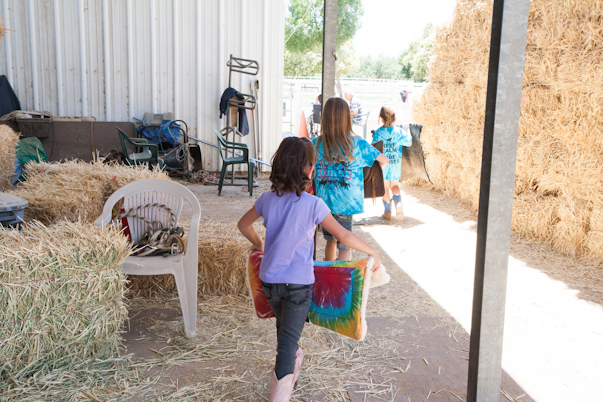 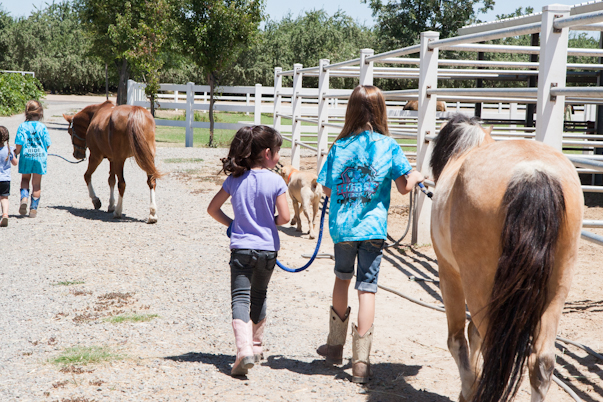