Reading books during Advent was a huge part of my childhood.  Billy and I would race around the living room making sure every possible candle was lit, plug in the tree, turn down the lights and look imploringly at Dad to turn off the T.V.  There would be some sighing and eye rolling, but he always did in the end.  Then, THEN, mom would read us a story (or five . . . ) from our Christmas book collection.  After, we would blow out the candles (or play in the wax, much to my mother’s consternation,) and head to bed.

Last year we began wrapping up a book to be unwrapped each day of advent and it sure added to the anticipation of the season.  This year we have great plans to do the same thing, but . . . well, so far it has been a one-day-at-a-time-holy-buckets-I-need-to-do-that-before-I-sleep! sort of deal.

Regardless, I found some new books at the library that we’re trying out.  Technically, we read this book before Advent really began but still. . . 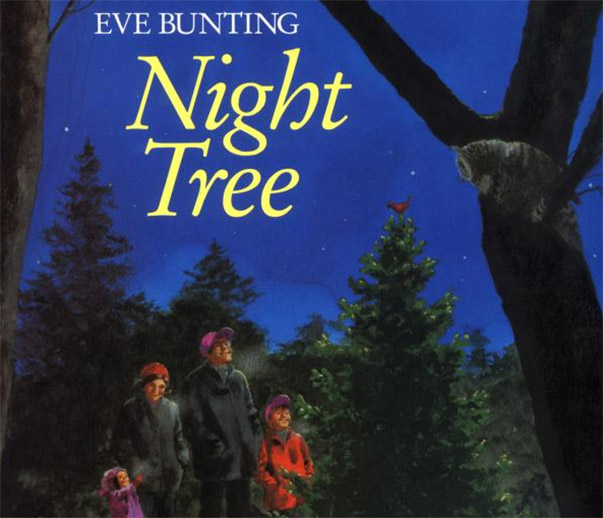 The book is Night Tree by Eve Bunting.  It tells the story of a family who is heading out to “their” tree.  You think they are in search of a tree to bring home but *SPOILER ALERT!!* they are going to decorate a tree in the woods.  They go every year and take things the animals will be able to eat.

It is a sweet story with detailed illustrations.  The kids enjoyed the sibling relationship and the true-to-life elements of the characters while I fell in love with the in-grained tradition the boy so fondly recalls.  It was a definite winner.

But then we looked around and realized that we had pumpkins uncarved and sad looking on the table, forgotten indian corn on a windowsill and half a bag of cranberries left-over from Thanksgiving.  “What if. . .” we pondered.  So we did. 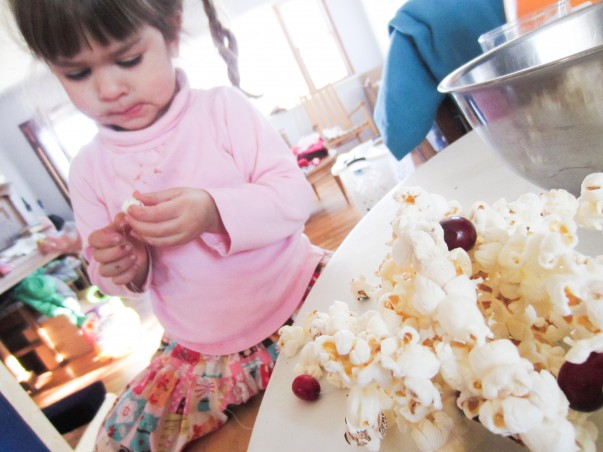 It was the first time for any of us had strung a popcorn garland and we all gave it a go save for Philip (too busy reading).  We had apples from Grandpa sitting out on the deck that became ornaments and frozen breadcrumbs tied together looked like stars.  Cutting down a tree is always met with the greatest excitement but the prospect of GETTING a tree and DECORATING one, too?  It was nearly too much.

Sunday proved to be a glorious day for tromping through the woods, so in Mass clothes we headed out.  Who cared if dad was likely coming down with pneumonia again and Max might be late to Scouts and Monday fell through the ice into the creek?  It was tree day!

We hauled our decorations and gifts down a ridge and over a creek.  The creek crossing involved the tossing over of 4 kiddos and yet no tears.  No tears except for me anyway.  I was laughing too hard to hold them back. Quickly we found a tree to bedeck and Monday helped herself to some bread without incidence.  Then it was off to fell a tree for the house (a real beauty, Clark!) and back across the creek on a bridge Jac constructed. 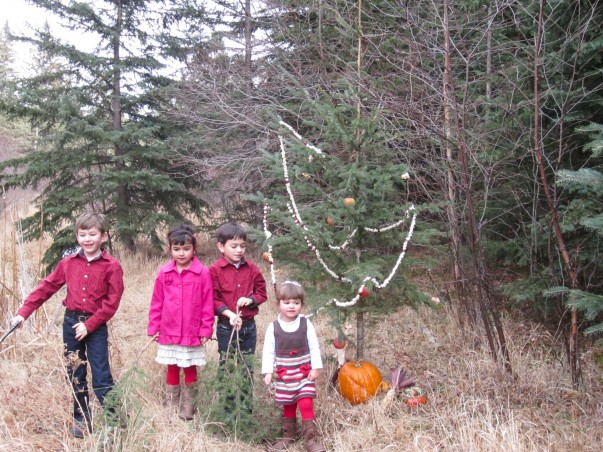 I had wanted a nice photo next to “our” tree, but we had to settle for wiley kids and two quick snaps.  Oh well.  Maybe we’ll catch it next year!