The winter of 08/09 will forever be remembered around here for two reasons; the winter I was pregnant with Ellie and the introduction of couchnastics.  Momentous and memorable, right?

For the kiddos, now that Ellie is here and she does things like destroy LEGO creations and laughs at funny noises, they have all but forgotten the pregnancy.  But the couchnastics?  Not so much.  It has been non-stop requests and reminders for the last 7 months.  Lord love ’em, they are a persistent bunch! I wish I could offer an explanation or an excuse for not indulging them this year.  Can I claim laziness?  Last year couchnastics seemed like such a great idea what with the never ending snow and their pleas to go outside.  Plus, I could set them up and then lie down on the couch.  This year they didn’t ask once to go out (Monday is out of control and they don’t care for it) and I had things to do! Result? Couchnastics suspension.

Until last week.  We had no where to be, no one to see and Jac and I were both on hand.  Let the games begin!

Below is the proof that it really happened.  You may notice some things that may be startling, so I’ll try to clear them up now.

– Tess is a Ninja Princess.  You’ll know it when you see it.

– Philip and Tess are jumping – really jumping – this year.

– It looks like Max could break his neck and I thought he would.  But he “knows what (he’s) doing.” You come and talk to him about it.

– Ellie was inducted into the couchnastic ranks.  It took one toss and she was hooked.  Face first, on her back, a toss or a free fall, she liked it all.  But she made it clear when she’d had enough.

Now if only the others could get their fill. . . 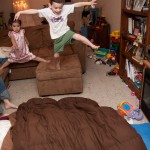 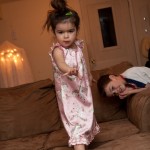 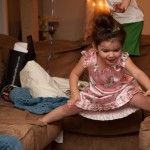 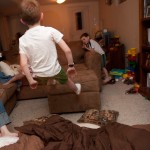 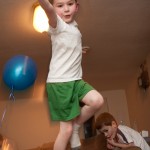 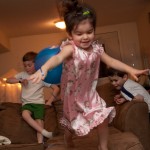 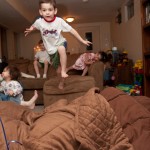 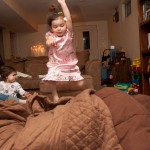 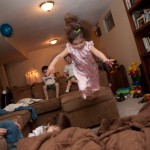 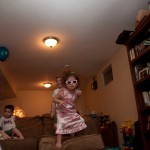 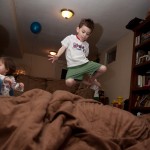 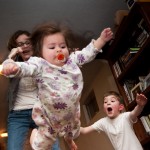 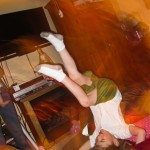 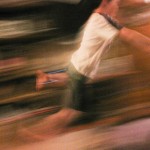