Have I mentioned it before?  My little problem of hording candy?  If not, there it is.

Okay, maybe “hording” is too strong of a word.  I just like to savor it.  Keep it around awhile.  Hence the rock hard peeps stashed in the pantry and the bag of Halloween candy from 2008.

So, one morning right before the epidemic broke, I took a long hard look in the mirror and decided something had to change.  There was a purging of all the accumulated sugar in the house.  Up it piled onto the table; out it spilled from bags and buckets, nooks and crannies (the kids think it’s hilarious that I use that phrase.).  How the children’s eyes shone!

“Can I have some?” they all clamored.

It was decided they could choose 4 pieces to squirrel away or eat as they pleased.  Magically, though I had just dumped the remainders of their pumpkins and stockings on the table, they were ecstatic they got FOUR PIECES!  They went back and forth and haggled with one another.  And somehow, somehow, tricky little Mr. Cavity (Philip) managed to eat four times as much as the allotted amount just during the decision making process.  He’s a sneaky one, that guy.

Then I announced the “plan.”  We were going to run a massive experiment on whatever candy they thought should be offered up in the name of science.  We would submit samples of the sweet stuff to tests with water, vinegar, heat and freezing temperatures.  Eyes got wide.  I thought they might revolt, but Max broke the silence.

“Can we put the stuff in the microwave and turn it on and take it out?”

“YEAH!!!!!!” They all cheered and danced and offered up hand fulls of confections to be sacrificed.  Together, we worked on sorting and creating order to get the most “scientific” results.

First came the water.  A hard and crunchy gummy candy soon was bloated and shiny in the cup.  Skittles lost their color nearly immediately and a tootsie roll quickly clouded the water and became a nasty mess.  The other bits took their time to change, but yielded equally gross results.

The vinegar, besides it’s smell, was a dud and created no visible change.

But the microwave!!!  Joy unbounded from that metallic box!  The putrid smells! The boiling, acrid sugar!  How it stuck to the bowls like super glue!  Most interesting: the Skittles that kept the shells intact, split and boiled out their contents. Smelliest: hands down, the Bazooka Joe.  Puke.  Grossest: surprisingly, the Kit Kat.  It took forever for the chocolate to melt just a little and, in the end, the wafers on the inside just burned and then leaked out in two black spots on either side of the bar.

Max, Princess Leia and the Ninja agreed that it made them think twice about eating the candy.

“What about the candy if we didn’t do anything to it?” I clarified.

In the end, everything that wasn’t used for science was thrown away.  There was momentary sorrow until we all realized that Valentine’s day and Easter are right around the corner.  We can start all over again!  And now we have room to store it all. 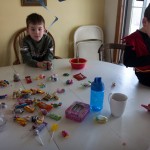 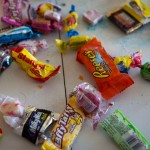 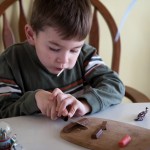 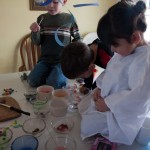 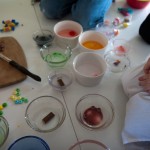 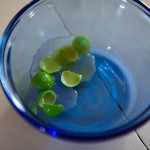 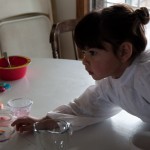 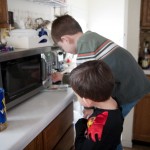 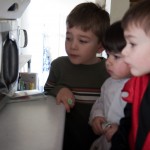