Okay, so it wasn’t really 24 hours, but it sure felt like it, both here and there.  At least to Jac and I.  You see, Friday night Jac and Max had their first cub scout over-night experience.  Camping would be a safe assumption, right?  Yeah, except we’re in “South Dakot-ee” (Jac’s words, not mine) and – to quote my mom – they do things differently here.

It needs to be said that while Jac was a nervous wreck about it, he ended up having a good time.  Max, of course, was beside himself with excitement about being with two of his favorite pals (homeschoolers from co-op), dad AND going to the YMCA.  (It was another item on his ever increasing bucket list.) Thankfully, the night didn’t disappoint.

Meanwhile, the other three and I stayed inside listening to the wind howl.  We made paper airplanes.  We played wii.  We ate Otter Pops.  We went to bed late.  We discussed what Max and Dad were doing at any given minute.

Philip was assured that when the time came, he, too would go.

“but I don’t want Max and Daddy to be locked up!”

Tess was assured that it was a Lock In and that they would be released.  Jac called and agreed that Lock up was a closer description.

Anyway, while we whiled away the hours at home, Max and dad swam, ate pizza and pop, played dodgeball and basketball, raced derby cars, tied knots and folded flags.  At 3 am, they rolled out sleeping bags and  watched The Jungle Book, or in Jac’s case, took a little nap.  They packed up and were home by 6 am to sleep off their night of incarceration.

I managed to keep The Others quiet and calm until 11:30 when we roused the sleepers with the smell of waffles and bacon.  Upon emerging from the room and being heartily greeted and questioned about his night, Max declared,

“Did you know we stayed up the whole entire night? I can’t believe it.  But I feel like it.”

His bloodshot eyes confirmed it to be true.

And with that, our venture into scouting was cemented and begun in earnest. We even have the picutres to prove it. 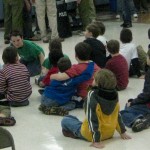 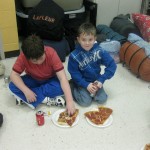 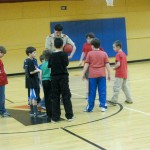 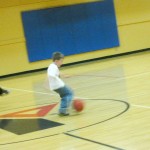 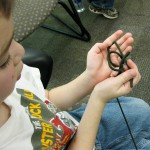 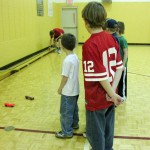 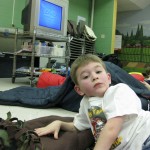 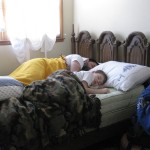