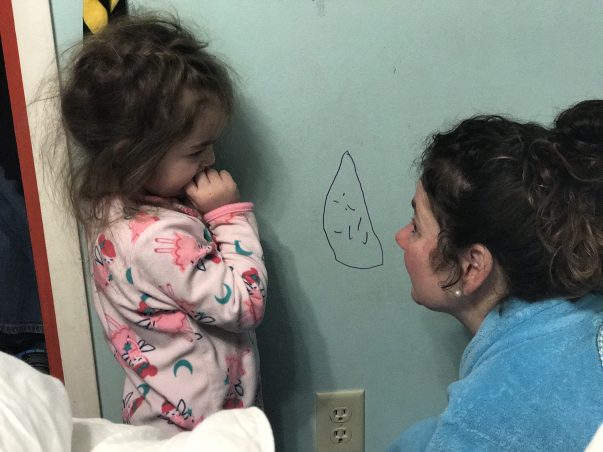 It’s been a long week and it’s only Wednesday.

Lucy and Gemma have been full of mischief and trouble.

Convincing as this was, I had my doubts. On the wall next to my bed I had found an interesting illustration done in purple sharpie. (Purple isn’t the only shade she uses-red, brown, green and pink have been in her repertoire this week, too.) I called her in and asked her if she was the artist behind the masterpiece.

She considered. She demurred. She began to deny and then nodded her assent. I sighed and said I was just so sad that she hadn’t done it on paper because paper I could keep, but walls need to be washed. We had what I assumed was a fruitful conversation and I gave her a smooch and thought I had sent her on her way.

I forgot she is the 6th child and fourth girl so she has all of the angst and drama of a preteen shoved into a three-year-old frame.

“I’m just really stressed out! Because I’m afraid you don’t like my drawing and think it’s stupid.”

Speechless pretty much sums up my reaction. Then I laughed (she joined in) and assured her I would never say that about her. But mostly I wanted to say, “If I were you I’d be stressed out about having martial law instituted on your person!”

Anyway, trying to work out how to function without anything in the house that can make marks. Open to suggestions!