Lucy’s got a diaper on her head 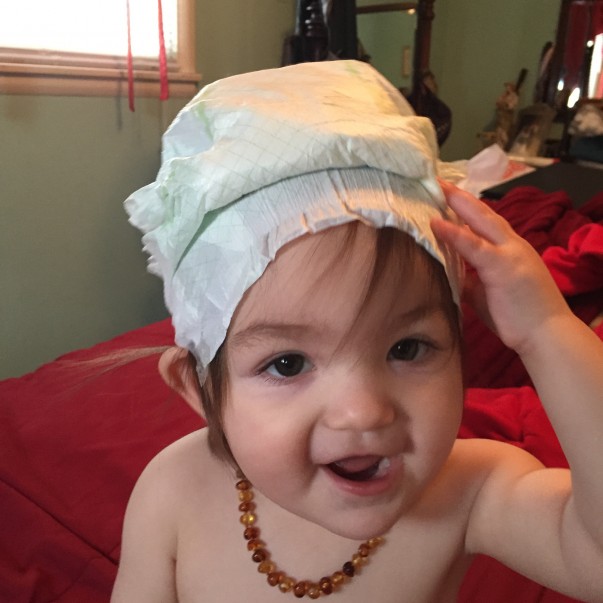 We learned a song when Max was a baby while watching Nic Jr.

We were ridiculous parents.

God bless the t.v. for introducing us to Laurie Berkner and her music stylings!  Back to the song . ..

It is a catchy little tune that goes something like this:

There are several verses and they all end with the making of the named animal sound.  When we found it and called it our own, we didn’t stop with animals.  Anything that could be placed on the head was sung about and each kid has learned it in turn.

That is to say that EVERYONE knows it.

The other day, I was getting Lu dressed for the day.  That girl . . . she is the wiggliest and fastest bare booty we’ve had yet.  She also really likes to adorn herself so we get some fun combos.  The morning in question, she flipped over, sat up and tried to put the folded diaper around her neck.  We laughed and I stuck the velcro together and made her a bonnet.

From the next room, I heard Gemma answer in song, “Poop! Poop! Poop, poop, poop!” Best. Song. Ever.

*In related news, Gemma and I have deep and profound conversations in her corner office while she conducts her business. “I don’t like poop in my mouth.  It’s not for eating.” was her insight this week.  I didn’t argue.