Sifting (wading?) through my photos, I found a slew of them from Hallowtide and thought, “Huh. I should probably do something with these.” And then I recalled that Lucy’s birthday was what ushered in that whole season and so I should probably start there.
Today, as we celebrated Ellie’s feast day, Lucy held out her hands for silence. “MY birt-day.” She pointed to her chest for emphasis. Yes, you HAD a birthday but now it was Ellie’s FEAST day. She considered this, then with a giant swooping motion through the air announced, “MY birt-day FAST!”
You can say that again, sister.
Thanks to her siblings, Lu was worked into a frenzy about said birthday weeks in advance. And weeks in advance we knew that we would celebrate with the Seton Greet and Treat and pumpkin carving. Because the Greet and Treat meant costumes, I was preoccupied with those but still managed to notice that Lu spent a good deal of time lustily singing, “Happy birt-day meeee! Happy birt-day meeee!”
She spent just as much time demanding cake for “ME!” and telling everyone around, “No, MY birt-DAY!” rather forcefully.
She was more than ready.
She awoke to the requisite decor and cards on the table. She does a happy dance whilst squealing, “Chicken fies!” every time she sees the Golden Arches so her siblings pronounced that as the lunch plan. Jac took them to pick up pumpkins ($1.99 for the big guys at Safeway if you wait to the last minute! Somewhere my dreams of perfect pumpkin patch outings curled up and cried.) and to run through the drive thru and I finished up the last bits of costuming. A happy meal with mini fries AND apples AND a toy (a talking Lucy from Peanuts)? Perfection.
When it came time, post naps, to don said costumes, Lu pretty much flipped out. The more her siblings cajoled and coerced, the more she frowned and scowled and yelled her refusal. After everyone else was dressed, she looked around and, realizing she was left out, became cheerful and enthusiastic. “Me! Mouse! Mine!”

We waited in a looooooong line for the Greet and Treat but she was patient and interested in the other revelers. When the first piece of candy was dropped in her bucket- well, her world changed. By the end of it, the pumpkin hung sideways in her fist, too heavy for her to carry without dragging. When I suggested I could carry it, her reaction was swift. “NO! MY pun-ket!” 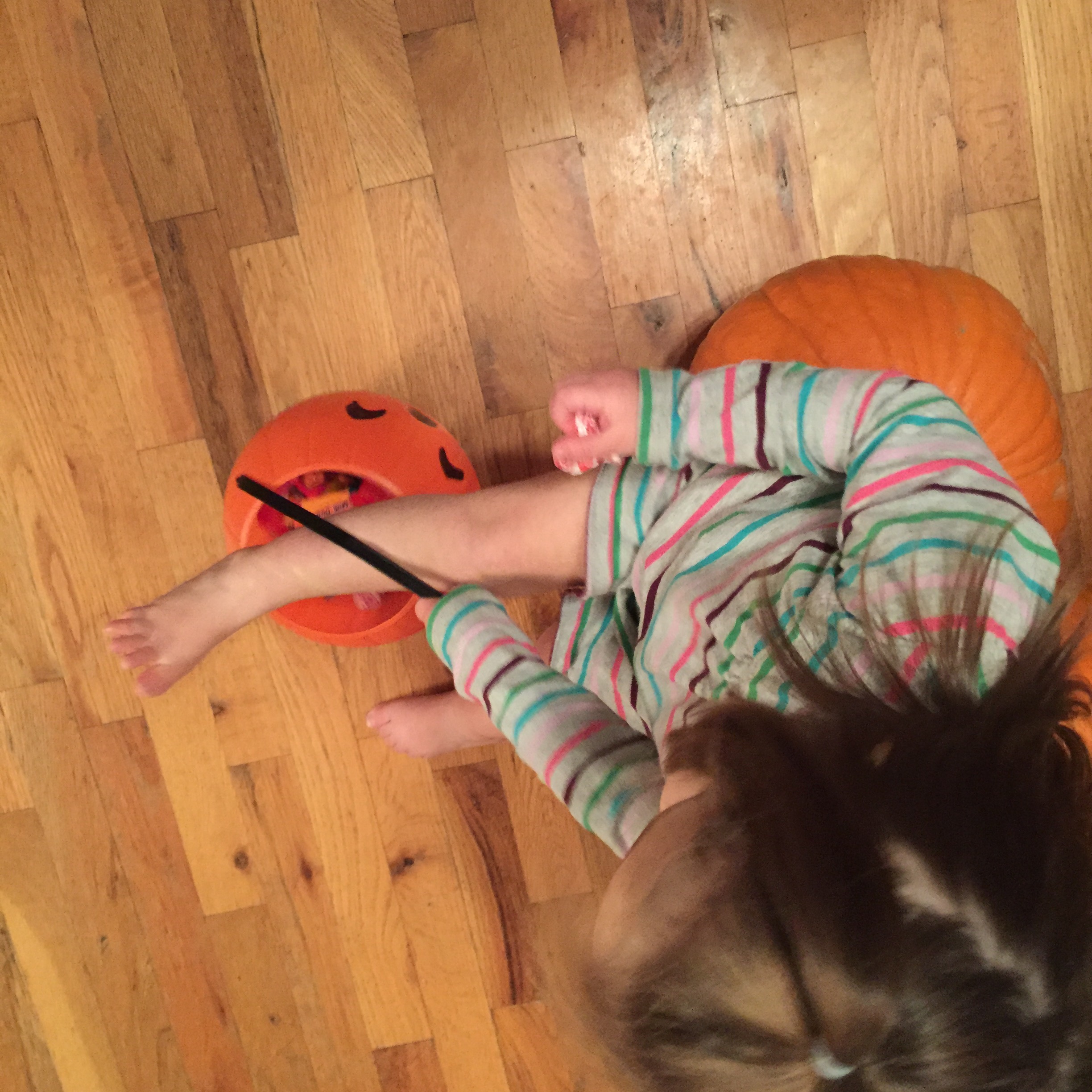 Thanks to the candy, she was uninterested in the pizza we had for supper with Fr. Dillon and Randy. She wasn’t particularly interested in the pumpkin cake pops either. But the gifts? There was something she could get behind! She especially liked the pink boots and “bookies” from Mama Syd and Papa Chris and, though it took her a bit to warm up to it, the singing, mewing pop-up cat card from her Godfather.

On to the pumpkins! She took one look inside Ellie’s, wrinkled her nose and pronounced, “No!” So she didn’t. Randy had brought 2 pumpkins to add to the stash and in the end only 5 of the 8 total were carved. Major fail when we couldn’t find the candles to light them that night. 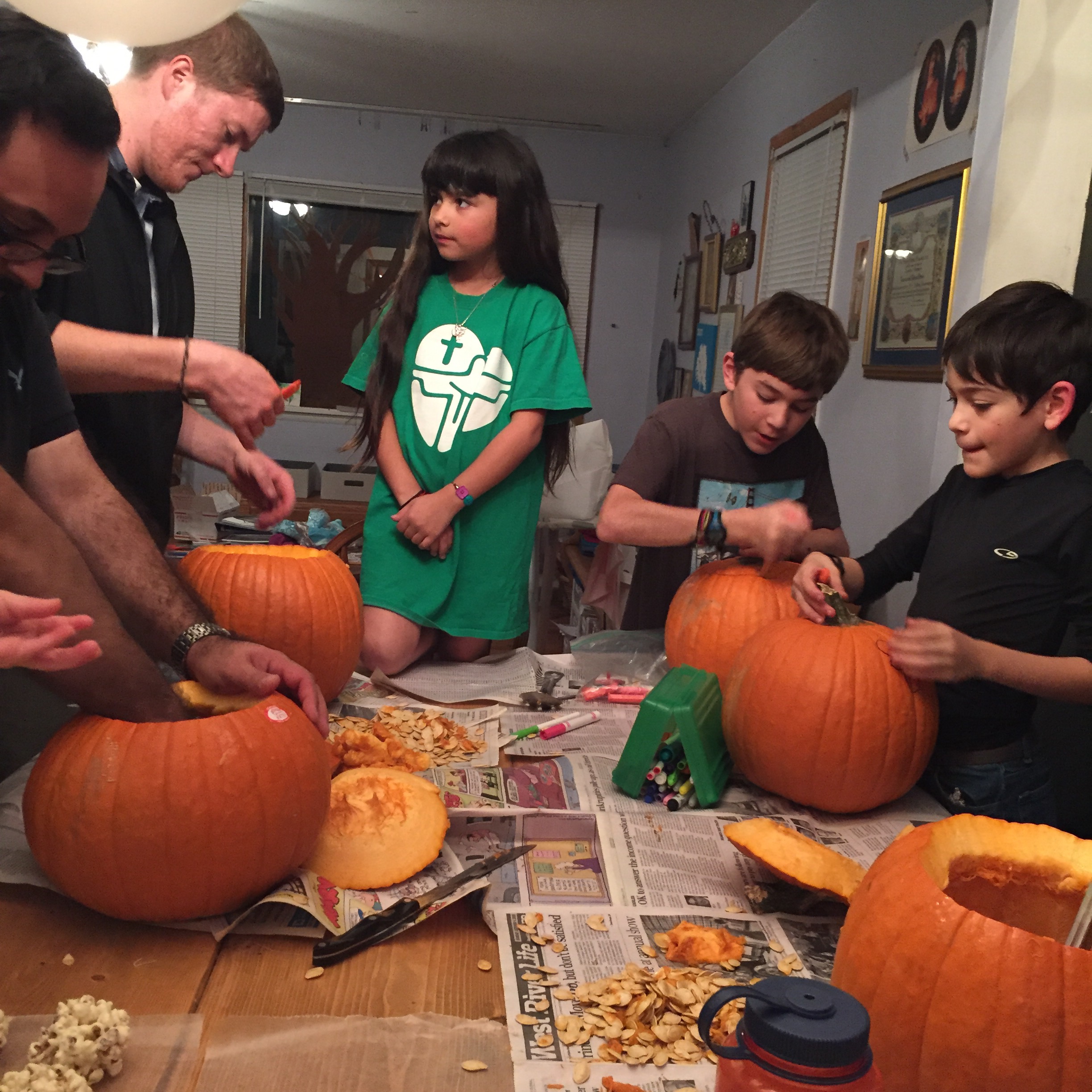 Lu didn’t care. She laud on the floor in just her diaper, surrounded by candy wrappers, happy to be two.