Because everyone in this house must lose their front teeth in a dramatic way . . .

Because there will be blood. . .

Because I wrote about everyone else . . .

By the time we got back from California, Tess had two wiggly front teeth.  They looked tiny and ridiculous in the way that teeth that are ripe tend to do.  She wiggled them and gave regular reports as to their looseness and requested we check and verify.

The night before we went up to the Lake for the first stay, she was waffling.  One second she was impatient, “Do you think my tooth will come out tonight?  Check it, Mama, and see.  I waaaaant it toooo cooooome oooouuut!” Insert dramatic sighing and draping herself over furniture here.  But then when we’d check and go wide eyed at the fact it was sooooo loose, she’d turn panicky. “No don’t! It’s gonna hurt!” And covering her mouth, she’d run away.

This went on for an hour or so.

May it be said that I am lousy at bedtime.  I’ve usually reached my quota about an hour earlier and I am impatient and tired and snappy.  And may the jury remember I am pregnant to boot.

I finally gave an ultimatum.  We were happy to hang out with and help non-dramatic kids and fortheloveofPete! she had to make up her mind.  Was the tooth coming out tonight or not?

Could she think about it???

In the end she wanted it out.  But how? There were some suggestions and some vetoes.  I half-heartedly offered to tie a string to the tooth and attach said string to the door. “People say it works but I’ve never seen it done.” I scoffed.

She jumped at the idea.

We rummaged for floss (Don’t judge. We had just returned from a road trip that had turned our toiletries upside down.) and nearly gave it all up until the boys suggested fishing line which just so happened to be in the craft closet. We stood by the front door, me attempting to configure a noose for a tooth and Tess growing more and more nervous.  I started to giggle  out of nerves and the sheer ridiculousness of the prospect.  Teeth are slippery.  How was this going to work?  And if it didn’t?  Well, there was a chance Tess would never trust me again. 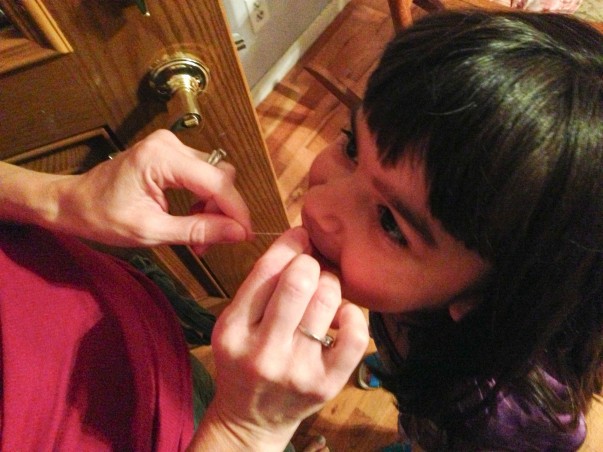 I began my apologies for a botched attempt as I tried to tighten the loop around her tooth.  Jac and the boys came to see what was happening and the boys, upon foreseeing disaster, RAN from the room to hide and cover their ears.  Tess’s eyes were getting very big and her shoulders were hunching up very close to her ears.  I think Jac was in disbelief that we were really doing this and he began to chatter and show Tess his phone to distract her from her fear.

The noose slipped off.

“I don’t think this is going to work!” I muttered while I put it back on.

We agreed we’d count to 3 and I’d shut the door.

I began to count and Jac called her attention to the phone.

There was a snap or a ping and stunned silence.  I looked at the limp string hanging from the doorknob and began to laugh out a “We tried!” to Tess when I looked up and saw Jac looking shocked.  He couldn’t process what had happened.  I looked at Tess and saw blood everywhere as she quietly said, “It’s gone.” 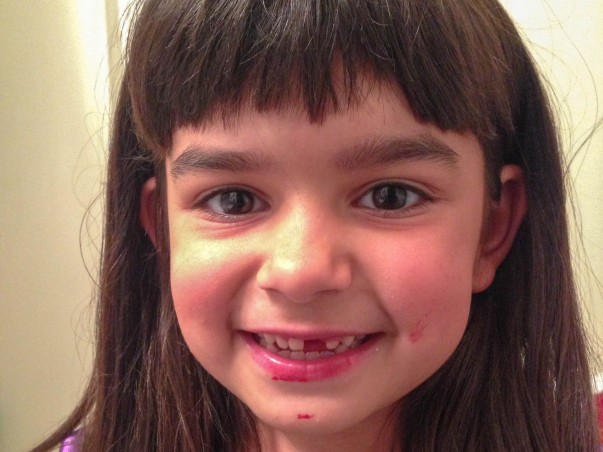 That’s when I really lost it.  I was laughing in shock and crying in terror all at once and Jac demanded that I not have the baby right then and there.

The boys decided then it must be safe to return and, though a little put off by the blood, they wanted to see the tooth, too.

We admitted we didn’t know where it was.  Everyone froze.

I nearly wet my pants at the hilarity of it all. Thankfully Max sprang into action and for the second time, found a sibling’s missing front tooth. He presented it to a grateful Tess.  We all huddled around her open palm.

“Wow.” she breathed, “It’s so small!” It was as if she couldn’t believe something so tiny could make such a big fuss.

She was handsomely rewarded that night for her bravery. It wasn’t long after that that we were playing dominoes on the deck at the Lake and she was wiggling the other tooth and Mama Syd nudged her and POP! out that one came.

She’s looked cute as a button with that gap through the summer but the new teeth have already broken the surface of her gums.  Because everyone else has had untimely removals we’ve forgotten how fleeting that gap can be. We will enjoy it while it lasts.