It occurred to me as we hustled the kids into their costumes to catch the good light for pics before the Greet and Treat that perhaps this was NOT the stuff that I desired memories to be made of.

Fast forward 10 years: “Yeah, Halloween is just really stressful to me.  It reminds me of my mother being hysterical . . .”

I exaggerate but only slightly.

It was a stressful costume year.

The weekend Mama Syd and Papa Chris left -IN JULY- we started discussing who they wanted to be. (An aside: “I think it’s cool how people usually ask, “Oh, WHAT do you want to be?” But for us it’s WHO because it’s an actual person.” -Philip) There was no discussion, just decissive announcements.  Surprised and pleased, I accepted all of them willingly (and, let’s be honest, I’d accept any saint so . . . ) But that Sunday we went to Cathedral for mass and I looked up at the stained glass and saw St. Catherine’s veil and my heart sank.

It was pretty much all uphill struggle from there. 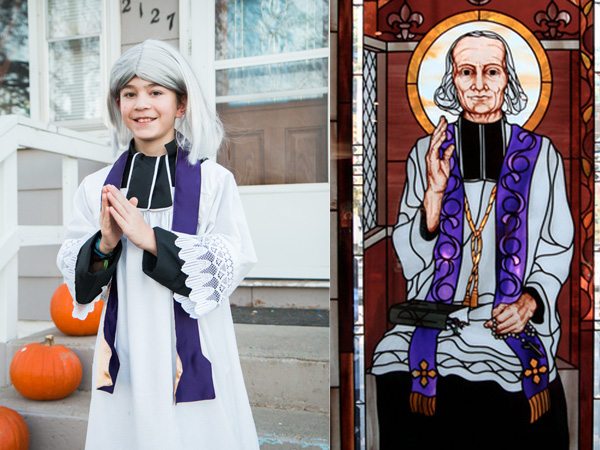 I was equal parts excitement and trepidation at the thought of sewing up a cassock and surplice for the boy man.  I was relieved and overwhelmed to find a cassock pattern but put off cutting it out for 3 weeks because things would get real.  Let it be known here and now that I hate patterns because I’m convinced they hate me.  “Matching symbols” – mine never match.  I told Jac I would stop sewing if the pattern instructed me to “ease in fullness” one more time and in the end I abandoned the hem for bias tape finishing.  In total the cassock used 150+ yards of thread and I didn’t weep when I had to rip out the collar and reset it.  But I DID cry when Max announced Thursday night that he had to start on his crusader costume because his friend wanted him to be a crusader for the party on Saturday.  Okay, I flipped out and then I cried.  For an hour.  In the bathtub, alone.  Yes, I had spent 3 nights up past 1 to get his stuff done for the parish party so I was a little frazzled and fragile but still.  It was a low point for sure. I was torn as I want him to experience those sorts of frienships that call for coordinating costumes but the cassock!  And the surplice that sprang from my mind and was trimmed in a thrift store valance!  And wig! Appologies were made (from each of us) and he rocked it as The Cure of Ars. 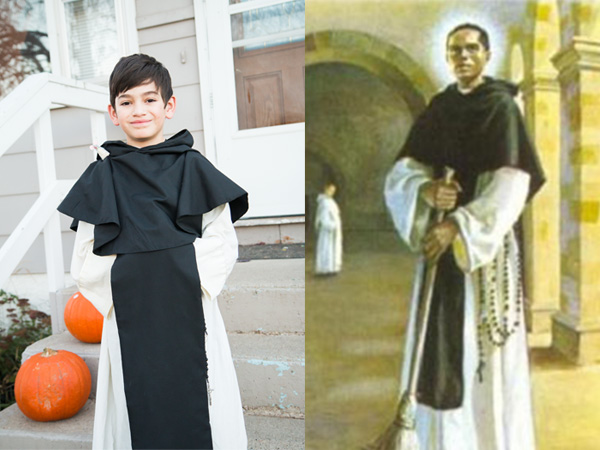 Philip’s current fave was a cause for joy.  In a year where every piece needed to be made, when I realized that he could wear the alb from last year I did an actual dance for joy.  Yes, a cowl/hood combo is tricky and slightly stressful but each time I do it, it gets easier and that’s good news as Philip announced on Sunday that he wants to be a different kind of monk each year.  He requested a mouse for his costume and we had a lot of fun stitching up a little felt critter for his shoulder together.  He was so enamored that he made one all on his own for Lucy’s birthday gift. 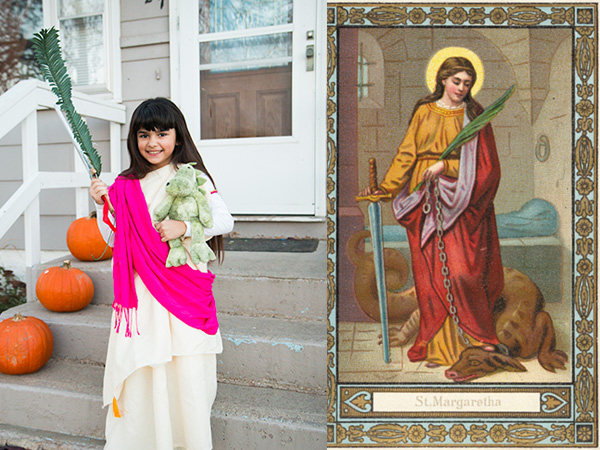 Tess was introduced to St. Margaret through the Explorer girls who took her as their patron.  Tess and I researched her story and went back and forth – St. Margaret is one of the Fourteen Holy Helpers, saints that were popular in the Middle Ages.  For that reason most of her artwork shows her in medieval dress but she was a virgin martyr from the 4th century.  She settled on Roman style and, God bless her, hers was the easiest to pull together.  We went in the style of Scarlett and Maria and used a curtain (technically, shower curtain.  Again.) for her dress and a pashmina I had for her shawl.  She found some great accessories and we had a sword, palm branch and dragon stuffy so she was set.  Tess was a great encourager to me when I wanted to quit – she asked over and over how she could help and would inquire each morning what I had accomplished the night before and would cross things off the list.

Is NOT the flying nun.  She is a Daughter of Charity and that’s not a veil but a Cornette after the headdress of the peasants of France at the time the order was founded.  Oh, we researched and did our homework!  Susan suggested writing the community for a pattern and the response I got back was that the habit it a sacramental so the sisters don’t pass it on.  Back to square one. *insert weeping here* Jac and I studied photos and paintings and made miniatures and then full scale models in paper.  I used heavy fusible interfacing instead of the traditional starch because I thought the smell would be too much for our sensitive sensed gal.  It worked excellently.  On Sunday after Mass I instructed everyone to remove their costumes so they could eat.  “Take it off? But why?!” Ellie wanted to know.  She kept it on, relishing in the feeling it gave as she jumped on the tramp and ran around the backyard.  She then asked if her habit could be a mass dress.  She’s a big fan.

Mary of the Immaculate Heart 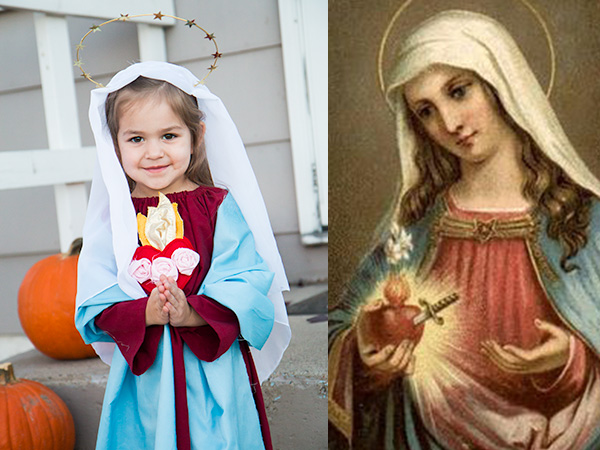 The kids thought it was so funny and clever that Mary appeared to St. Catherine 3 times to tell her to make the Miraculous Medal, “And Gemma is 3!” They like connections.  I let Gemma decide on the colors of her dress and “capey-cape.”  “And a bail, right mama?  You’re going to make me a bail, too, right?”  We cut up a sheet for her dress and everyone was delighted at the bits and pieces from my stash that came together to make  her heart.  But Gemma was over the moon about the halo with stars Jac fashioned to top her veil.  Friday as they donned all the pieces for the first time she opted for her “sparkle shoes because they match my capey-cape like they are really Mary’s shoes because I AM MARY.” 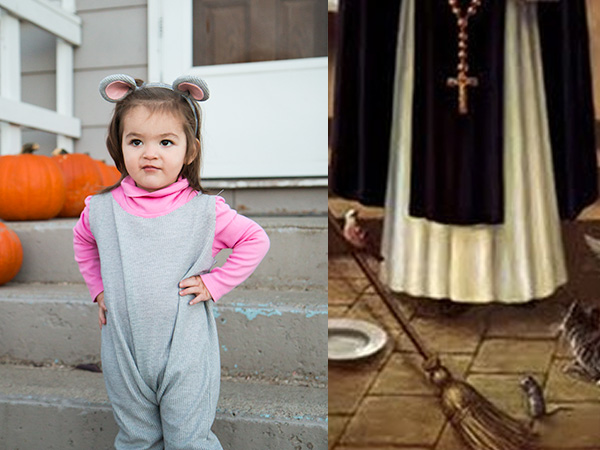 We couldn’t decide what we wanted Luce to be.  We were leaning hard towards her being the dragon St. Margaret vanquished.  Everyone liked that idea because, as Phil said repeatedly, “All our saints battled the devil in their own way.” Everyone liked that idea but Randy who pulled the godfather card and nixed it.  So she was a mouse for St. Martin instead.  I cut the jumper out of a thrifted thermal and Tess put the elastic in the existing hem – a mercy for sure.  I sewed her tail on by eye-balling it one late, late night and it ended up being about 3 inches off center which proved to be all sorts of funny to Jac each time she put it on.  She was not excited about the costume or her ears, no matter how her siblings tried to coax her.  But when she saw everyone else dressed to the nines, she changed her mind very quickly.  Come Saturday, she was yelling, “No!  Me!  Mouse! Me, face!  Mouse!  Face!”

They decided when they got into the car after the All Saints party on Saturday that they didn’t want to go trick or treating – Sonic corndogs, Ichabod Crane, and Charlie Brown sounded just right to them.  And really?  It was the best thank you they could’ve given me 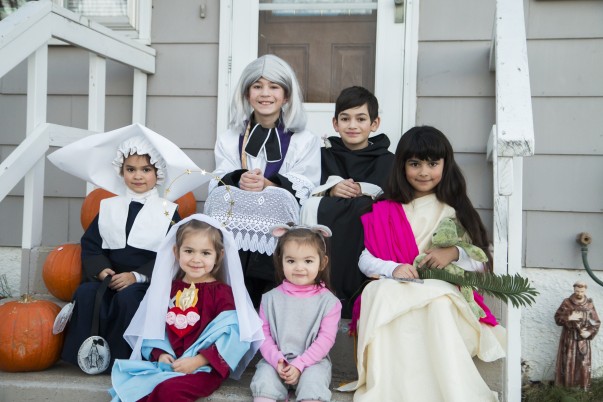