For all the saints, who from their labors rest,
who thee by faith before the world confessed,
thy name, O Jesus, be forever blest.
Alleluia, Alleluia!

We’re still reeling from the week’s celebrations.  There are bags under eyes and sleep deprived kiddos all over the place.  It isn’t pretty.

However, what WAS pretty, was this year’s crop of Saints.  A first in this house, they were chosen without any prompting, steering or coercion from parents or siblings.  Okay, well, Tess had some help with a suggestion, but that was it.  Ellie announced she was going to be her “name saint” and since she was Elizabeth of Hungary last year, Catherine it was.  I spent no little time researching medieval Dominican habits with some trepidation.  I mean, sure I had made a Poor Clare habit for Tess, but this needed to look different.  Anyway, my surprise was genuine when, upon entering the fabric store, Ellie said, “Remember, Mama, I’m St. Cafferine. It needs to white.” Me=shock because as a Dominican she would wear white.  So, either Ellie has paid attention, her siblings instructed her or she was guided by the Holy Spirit and I’m okay with any of those options, really.

We had Catherine of Sienna, Kateri Tekakwitha, – the first Native American Saint and just canonized – so we added Catherine of Alexandria to round out the mix and make it the year of the Catherines (as Kateri is a translation of Catherine).  Good times.

Philip went through 10 different saints before he decided on St. Longinus. And Max had a very precise picture of what Miguel Pro should look like thanks to the window at St. Joseph’s in Modesto.  Anyway, I was happy as a clam that Philip chose for a second year in a row a costume that we had all the pieces for (save for the spear, but Jac’s always up for constructing new weaponry . . . ) and that Max again took over much of the making himself.

I thought I’d ask my little saints -in-the-making about their costumes (a school lesson this week was Saint reports.  There were no blank stares from THESE kids when they were asked to give a hint about themselves at the co-op party Saint Walk!) and report their answers. 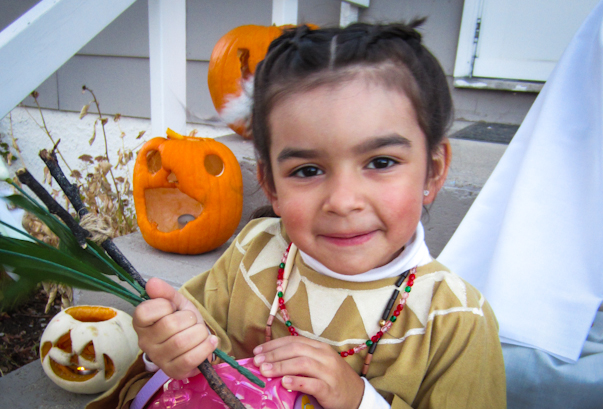 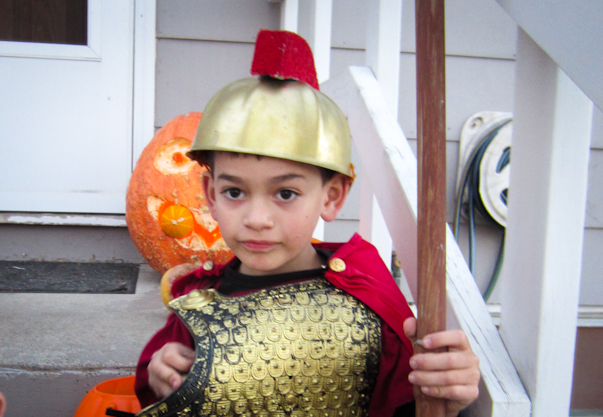 Who was your saint this year? “St. Longinus.”

Why did you choose your saint? “Because he’s really cool.  Because he’s a Roman Soldier and he stabbed Jesus in the side.” Max: “Remember that wasn’t it, there was also a miracle.” “Right.  Actually several miracles happened and resulted in healings.” (He really does talk like that)

What was your favorite part of your costume? “The shin guards.  They made me feel cool and they felt good on.  The part I didn’t like was my helmet.” 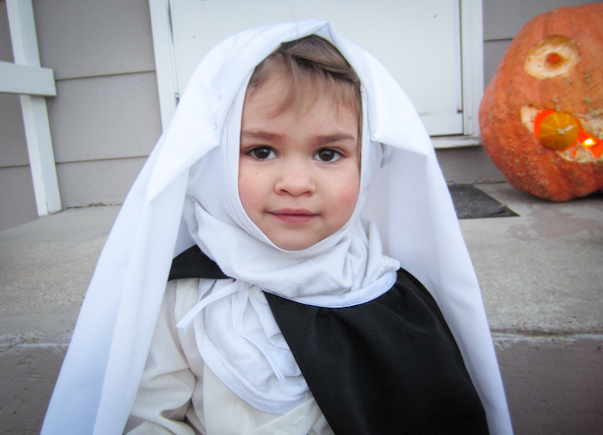 Who was your saint this year? “St. CafferineofSienna” (it all runs together when she says it)

Why did you choose your saint? “Because she has the Cafferine first.  Before the Sienna.”

What was your favorite part of your costume? The black part.  (I thought for sure she’d say the stigmata as she really enjoyed having someone draw on her hands.) 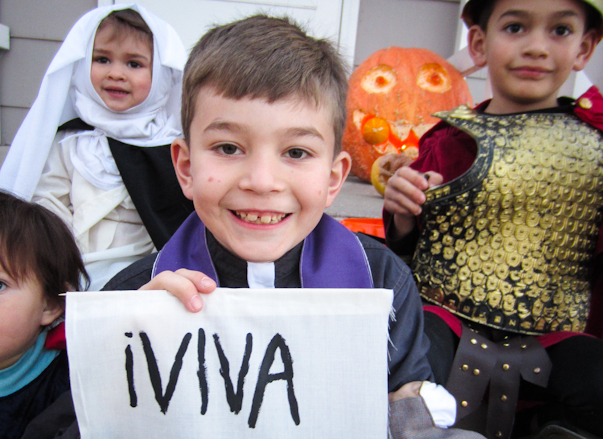 Who was your saint this year? “Blessed Miguel Agustin Pro”

And Gemma?  Well, I’d have to say I thought she’d really like having a spiked wheel to gnaw on (Never too young to love the martyrs is what we always say!) but she just liked to wear it on her arm like a bracelet.  She really could’ve done without the tights and shoes.  They cramped her style. 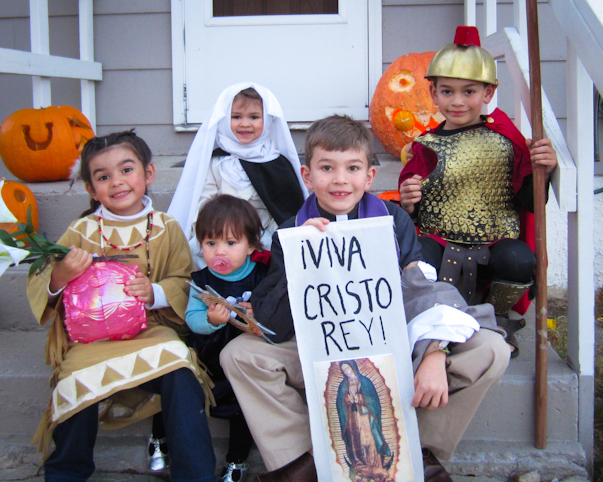 O blest communion, fellowship divine!
We feebly struggle, they in glory shine;
yet all are one in thee, for all are thine.
Alleluia, Alleluia!