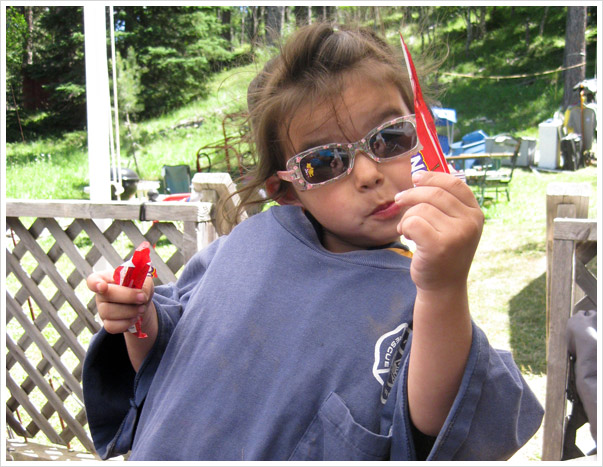 Remember when we went to the fair and rode the rides?  Remember how I said Tess was fearless?

It wasn’t a one time thing.

Why is it that we haven’t noticed this attribute before?  “Uh . . . Maybe because you have 4 kids 7 and under?  Do you notice anything?” you say.  Agreed.  True.  Yes.  But really I think it would have snuck to the surface before now, don’t you? Perhaps I just didn’t think it was odd for her to keep up with her brothers, to follow them up into trees and out onto limbs.  Maybe we just took for granted how she is so rarely afraid because we just expected her to be.

At any rate, Tess’ bravery has become more pronounced as of late.  When she went to Watiki for the birthday party, she walked away from me without looking back.  When I finally DID remember to pick her up, the birthday girl’s father shook his head.  “That Tess of yours. . . She’s fearless Annie! I think I’d be worried if I were you. . .” I smiled in agreement.  Turns out she had ridden down each of the 5 huge slides not once, not twice but OVER and OVER.  She wore everyone out with her enthusiasm. Then, last week after the field trip, the kids played in a park in Deadwood.  Mama Syd and I chatted, watching the kids from a distance.  Suddenly, a kindly grandfather was lifitng Tess up and helping her across the zip line.  Did she hesitate and change her mind half way or was she beaming and looking as if she had won the lottery?

The nice man walked over to where we stood at the fence.  “She. Is. Fearless!” he grinned.  I couldn’t help but shrug as mom and I both said together, “Yep! She sure is!”

How is it that even strangers can see what should be so obvious to me?

Perhaps it’s because I see the other side of her, too.  And too often.  For example, last evening Tess woke up from her nap crying.  SOBBING.  I inquired about the tears and her reply was, “I can’t bweave!” (breathe) Hysterics were building.  Calmly, I explained that crying was probably not really helping that situation and then attempted to get her to blow her nose.  The howling!  The waterworks!  Ellie climbed up to her and swiped at the tears on her face.

“She’s trying to help you.”

At this point I gave responsibility to Jac.  He was calm-er than I and more compassionate.  He wielded the bulb syringe. She sounded like she might die.

He offered to blow her nose.

“Do you want me to suck out your nose or do you want to blow it?”

“I don’t want to blow!  I’m ‘cared it might huuuuuuuuurrrrrt!”

I burst out laughing to keep from losing my mind.

(In the end she had her nose sucked, a steam treatment AND her nose blown.  She lived through it all.)

So, that’s it.  THAT’S why I don’t notice Tess’ intrepid spirit most of the time.  It is tempered and over-shadowed by her dramatics and silly fears – the things that in the day to day business of raising and forming children make me stark raving mad. Her bravery, on the other hand, makes life easier, smoother.  It doesn’t raise any flags.

I have a feeling that if this stays around as she grows that I will need my own dose of fearlessness to survive.  And lots and lots of patience for the times she isn’t so brave.