To round out our Tour of Horrors a la the Dentist was a scheduled surgery for Gemma.

To say I was a nervous wreck was an understatement.  I was worried about her pain, her experience, a traumatic post op, recovery . . . and then I got a visit from the same day surgery center.

That’s when the fear began to gnaw. 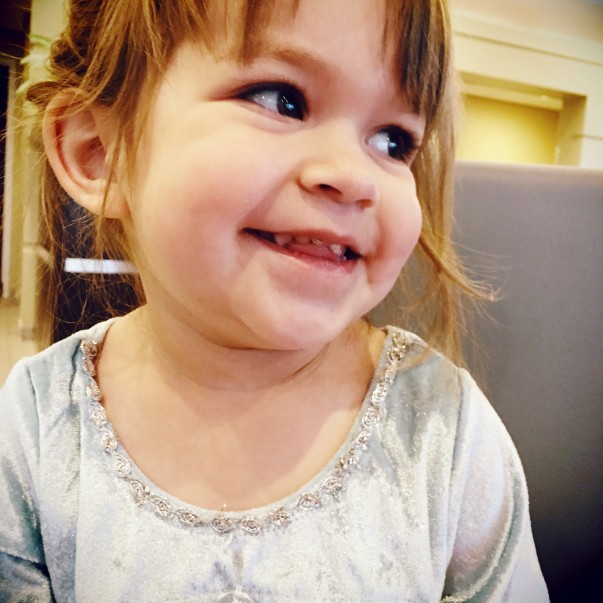 We woke up very early to get her and her empty belly to the appointment on time.  On went the Elsa dress and tights and high heels because it gives her courage and was familiar. I carried her through the doors and onto the pleather couch for check in, hyper aware of how tiny and light she felt in my arms.

Waiting in the pre-op room, we opened the crayons they had given her.  “Oh, Mama, look!  They’re all my favorite colors!”  Clearly, she was oblivious to any stress. 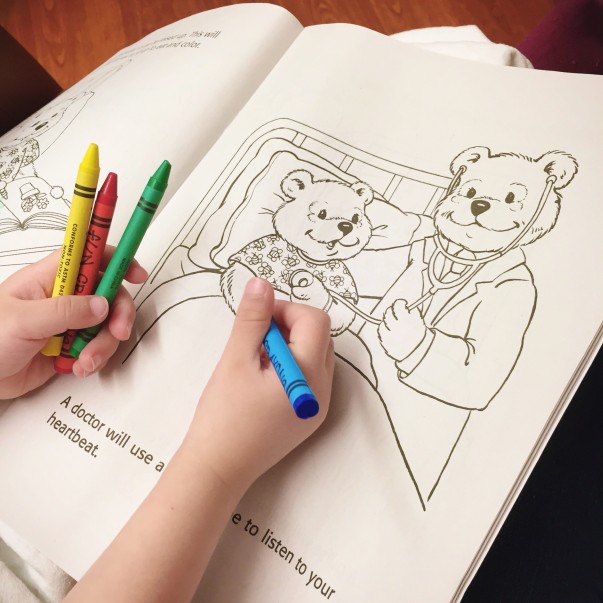 Her silliness seeped from her pores to such an extent that when they came in to check after they administered the first sleep-inducer, I wasn’t sure what was her and what was the meds talking.

Then her eyes started to roll.  “I’m getting sleeeee-peeeee!” she giggled and tossed herself back in my arms.  I told her she could close her eyes and I rocked her.

Her eyes opened and she attempted to sing along, “You make me blue, blue! Bluh, bluh, blue, bluuuee.” She tried to talk, but only more of the same came out so she nestled into my arms.

I thought she was asleep when her eyes opened wide.  “The angels are going to fly, fly, fly me up to heaven to see Jesus!” Her arm fluttered up to the tiled ceiling.

No one should let a mama’s heart hear such craziness at such an hour because, come on!

“Can you see the angels?” I asked her, her eyes intently focused above us.

“NO!” she looked at me as if I had lost my mind.  Then her eyes sparked with mischief.  “Not yet!” she sing-songed.

After a few moments, she gathered herself to ask for ‘Rolling in the Deep,’ her long ago song.  But after just a few seconds, she sat back up.  “Actually, can you play me ‘Open the Eyes of My Heart, Lord?”

She doesn’t remember the nurses carrying her back.

I attempted to read, but mainly watched the clock and tried to piece together prayer.

When the doctor came to tell me everything went great and they “wiggled the front teeth!” I kind of wanted to push her.  Wiggled? Really?  They had just stitched up holes in the perfect gums that we had kept watch over for weeks waiting for those very teeth to make their debut when she was a baby. But how do you explain mourning to a dentist?

I met Gem as she was wheeled to her room.  Her cry was hoarse and so very sad, but not the ear piercing scream I had steeled myself against.  3 seconds later they told me I could hold her and as soon as I sat down, she quieted and stilled.  Her eyelids fluttered but didn’t open and in a very slurred, very raspy voice she asked, “Can I play on your phone?” I suggested after a little nap and played her new song on repeat for thirty minutes instead.

I dressed her groggy body, opting for the skid proof socks over the high heels and headed home.  It was a testament to the army of folks praying for us that she didn’t scream or cry until she was safely tucked into our bed.  And – thank ya, Jesus! – there was no puking, either.

We miss her teeth but agree she’s still just as cute.  And she’s as spunky as ever, so there’s that.  Fingers crossed, this is the last of the dentist for a really long time.  Please, Lord, make it so!