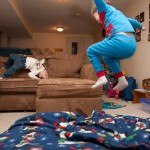 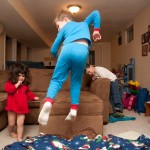 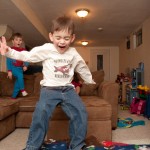 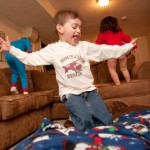 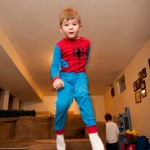 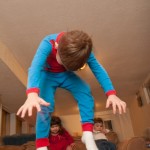 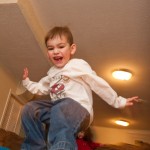 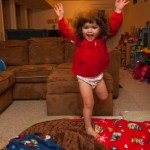 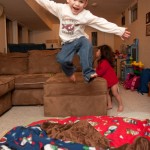 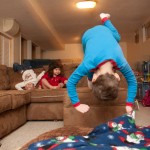 The speak for themselves, really.  (And they say, “You wish you were here, don’t ya?)

The most incredible things about the evening were:

1. Tess really jumping off the launch pad instead of flopping off.

2. Philip’s agility to strike poses in the air.  It’s like he has “Vogue” running through his head.  Or he’s watched a lot of snow boarding montage videos – he hasn’t.

3.  Max summersaulting in the air.  I do not kid about this.  The above “Pouncing Cat” was his first attempt at a mid air flip and he was so mad that it didn’t turn out the way he had imagined.  We laughed (okay, just chuckled, really) and told him it takes a lot of practice, that it’s hard to do, that it’d take time.  A few minutes later I noticed him curled up in the fetal position in the corner of the couch, face hidden.  “What’s wrong?” I demanded impatiently.  (I assumed that he was moping because that’s what I do when things don’t turn out for me.)  “Me?” he peeked out from under an elbow.  “I’m just seeing in my brain how to do it and working it out so I can.”  “Oh. Okay.”  Jac and I shrugged at each other.  But then, two minutes later, he was on the launch pad, eyes shut and slightly bouncing.  “Okay!  I can do it now.”  We all encouraged him, expecting another cat pounce or a broken neck but HE DID IT!  Just like that!  We were shocked and awed and were screaming like madmen when he landed.  His response?  “See?  I told you I could!”