I am a rule follower through and through so it makes sense that (for the most part . . . ) my children are legalistic about traditions.  This is how things like Mardi Gras, Extravaganzas, The Aminal Tree, and the like have been born.  I happen to do something once that seems like fun then they hammer it down as an ALWAYS and EVER thing. 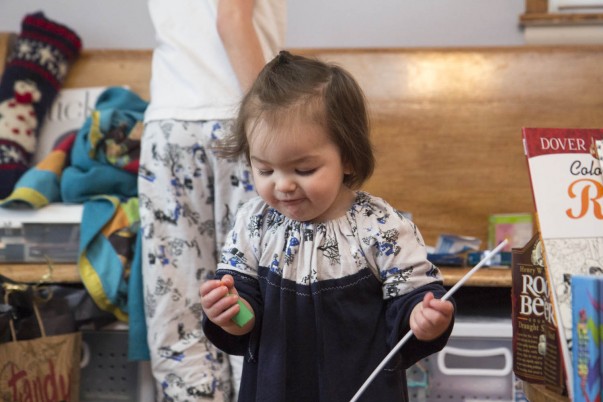 So it is with The Christmas Jammies.  We’ve always done new jammies for Christmas Eve because, well, my family did that when I was growing up as did my mom’s family before that.  It’s tradition! It happened by accident the year that Gemma was born that my hormone fueled mind thought that homemade jammies would be a good idea/cheaper.  I didn’t mean for it to become a THING . . .

I never quite got my act in gear this year.  There was no excuse (could the stress of a new engine for the ‘burb and assorted dramatic relationships count?), I just didn’t get things together.  I did pray through advent- which was very, very good – but the tub for all the decorations never went downstairs and the rocking chair didn’t move either, we just tripped over it every day.  We schooled and made things and cookies and even got our shopping done early.  However, the wrapping, which happens to be one of my most favorite things in the world, REALLY!, I didn’t start until 2 am Christmas Eve night.   I just struggled.

So it was with dread rather than with joy that I overheard my children in the weeks leading up to Christmas that we open our gifts on Christmas except for one present on Christmas Eve, which is ALWAYS jammies.  And not just any jammies, but “the best jammies in the world because our mom makes them.”

I told myself that Mama Syd would say to look at the positives: they love the tradition and they love my jammies.  I’m not so good at the bright side though.

Last year I was sewing as we walked out the door to Mass on the 24th.  I didn’t want to do that again so I vowed I’d have them done before Christmas Eve.  They were complete at 3:30 am on the 24th but since I didn’t go to bed on the 23rd, I’m calling it as keeping my promise.

Earlier in the day I had worked on an ‘Anna from Fwozen’ cape for Gem because she had spent the summer and fall with a fleece blanket tied around her neck. I had set out on THAT adventure in high spirits but picking stitches out of fleece is soul crushing and it sucked up a good chunk of the day. (That pattern is here. All mistakes were mine as it was very well done.) I was rather bleary eyed and shot when we gathered to pray with the kids before bedtime.

“Lord, we pray for Annie and her sewing tonight.  Give her the energy she needs, a clear mind, and help her not to make any mistakes.” Jac pleaded for me. At that point I was rather incredulous that anything could go right, but we all said a rousing, “Lord, hear our prayer!” anyway and sent the troops to bed.

I count it as a bonafide miracle that I began sewing 6 jammies at 10:00 pm and did not make a single mistake.  Not a single stitch was ripped, hallelujah, thank you sweet baby Jesus! (Let me know if you have intentions you’d like Jac to pray over because seriously.)

The kids were pleased with them and they fit much to my relief.  When I bought the flannel, I didn’t think twice about making a Von Trapp Family set but the guy at the fabric store seemed doubtful.  “A whole matching set, hmmm?  What ages?” I told him and then informed him I’d do it until they wouldn’t let me any more and I figured it gave them good fodder for their therapy later. 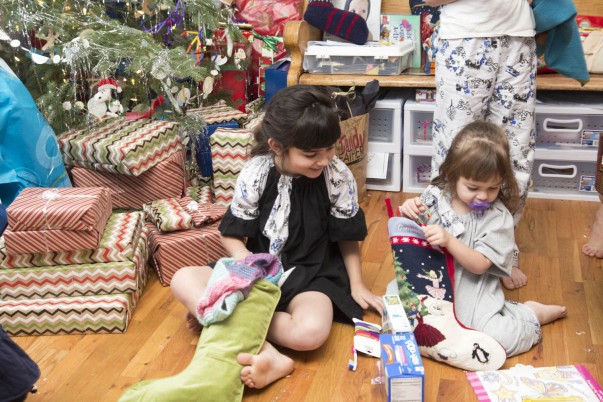 Anyway, for the boys, I drafted my own pattern for their pants from their measurements and current pants.  For the girls, I used this pattern for the base and then embellished from my own mind.  I used t-shirts and skirts from my stash and again thanked the Lord that I was able to sew knits without swearing or crying.

Shoot, reading this, it almost sounds like I had fun!

You know who did not have fun?  Gemma.  Gemma hated the jammies (still does) because they aren’t ‘Fwozen’ or ‘from Mama Syd’ or her ‘warm ones.’  Really, it’s fine that she doesn’t like them.  It keeps the tradition of naming the jammies alive. ‘2014- The Year Gemma Hated.’ 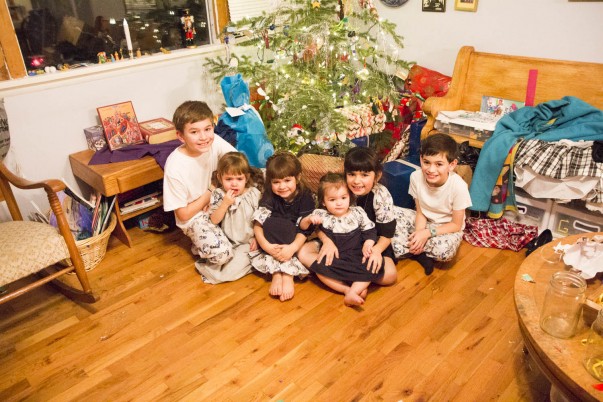 *For those of you with RS feeds – hello 8 readers! – I posted about 2014 All Saints Day costumes today, too.  I placed it in October where it should have gone because, Lord knows, next year or a few down the road, someone will want to remember what it was like and we won’t remember and we will come here expecting to find it.  And now we can.  It’s here if you want to check it out.