It did.  It really, really did.  Driving home from Mass, we watched the moon rising huge in the east like a giant orange slice.

-The kids were excited – desperate, even! – to give gifts to each other.  We shopped with them on Christmas Eve with what little money was left between all of us and they outdid themselves in generosity.  It also took the boys roughly 2 hours to wrap their purchases.

-Elizabeth came over to work on a gift on Christmas Eve afternoon.  Can we make that a tradition?  Sooo good, sister!

-Leftovers for supper.  Always with the leftovers!  Maybe someday I’ll have my act together enough to make a supper like mom used to make.  Until then, smorgasbord!

-A touch of something yucky stomach-y for me.  And then El.  Not so much fun.

-Max served Christmas Eve Mass with the Bishop and the Rev. Deacons Grant and Adam, and alongside Marianne and Robert and Seminarian Andrew.  This was the big leagues, folks, and he was reverent and pious and attentive as always.  I cried. 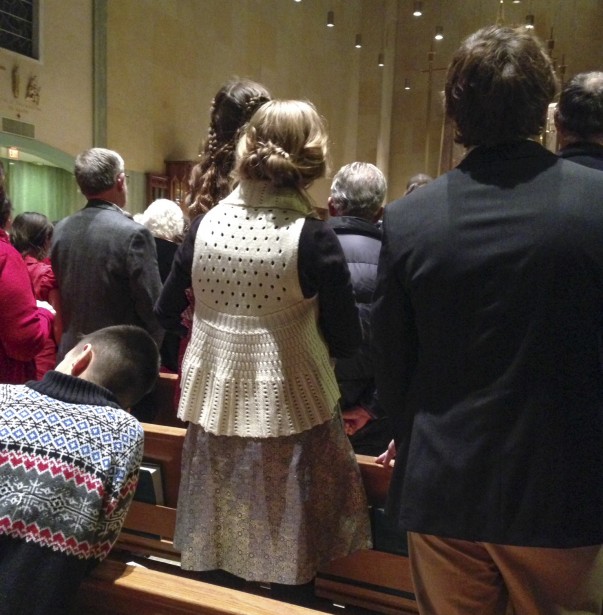 -Everyone – save Lulu – stayed awake for the whole of the mass. They were tired when we got home but really held their stuff together well. 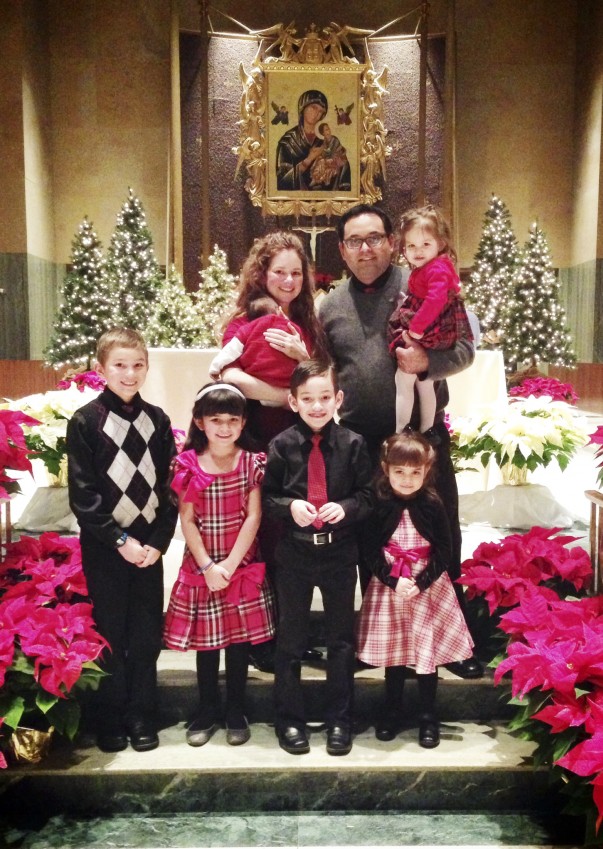 -Homemade jammies again! Super sale fleece and tees I stitched up for the girls.  Ellie’s still wasn’t done when we got home so their was frantic sewing while they tidied and trimmed the tree.  Fleece Navidad!

-There was tinsel.  Loads and loads of tinsel. 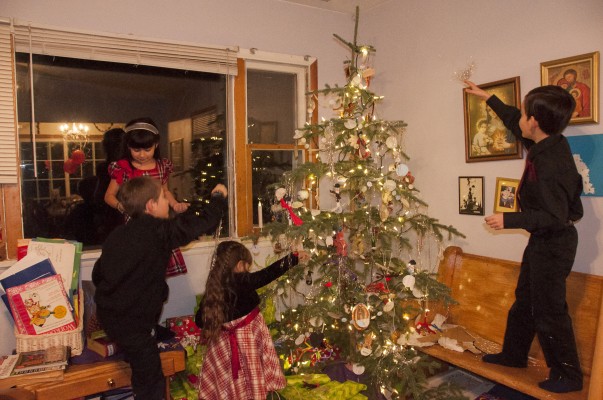 -We had the stockings stuffed and ready to go 2 days ahead of time.  High five! We wrapped gifts until 2:30 am Christmas morning (they just kept coming from California!). 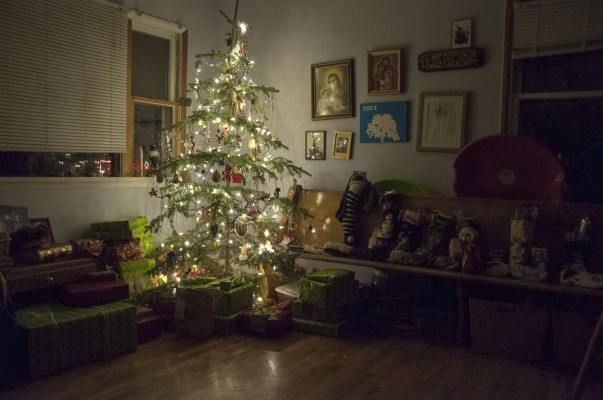 -I stayed up until 5 am working on a scarf for Jac.  I can crochet in my sleep!

-This was the year of the food – jerky, shells and cheese, shaped macaroni and pop-tarts were all given with stockings.  They loved it. 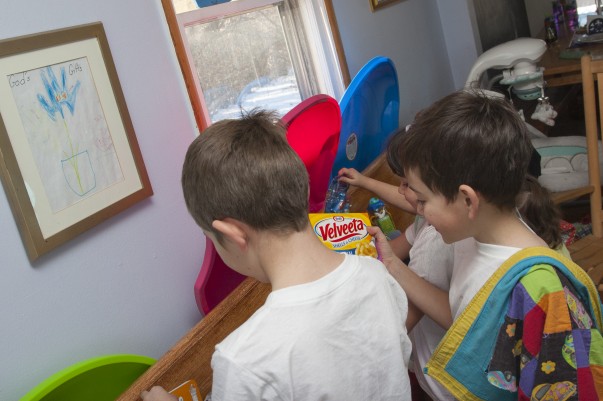 -Jac and I were the recipients of impressive Lego creations. Jac received a working pen, a pipe, tobacco and matches (NOT working) and I got a necklace with a lovely green parrot pendant.  The week before Philip had asked, “Mom, what’s your favorite animal?” “Hmmm. . . probably a horse.”  “Oh.  And birds, too?” “Uh, sure.  Birds too.”  So glad I said yes!

-Before presents, we read the gift Luke sent – a comic starring Susan and the kids.  It’s been read several times a day since.

-Ellie was almost buried in presents. 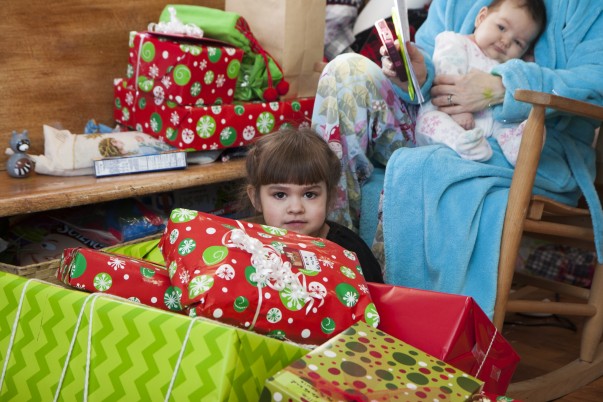 -Gemma couldn’t get enough sugar (and has been on a sugar high ever since . . . ) 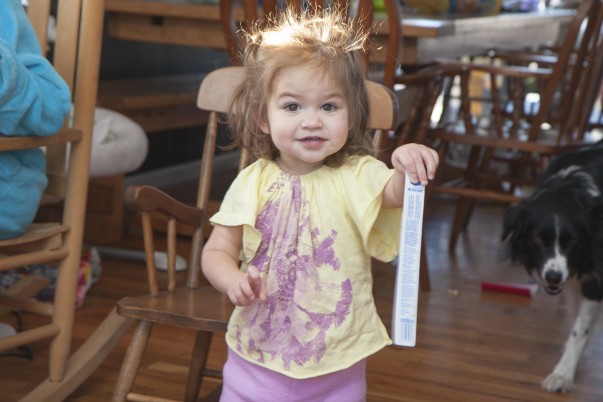 -They were too busy to eat the breakfast that was ready at noon and no one was dressed until right before we went to Grandma and Grandpas at 4.

-We all slept hard that night. 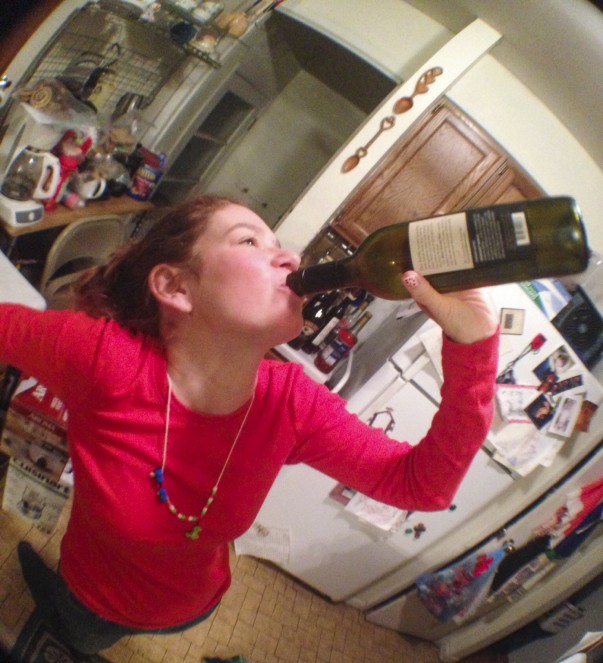 Glory to the newborn king!