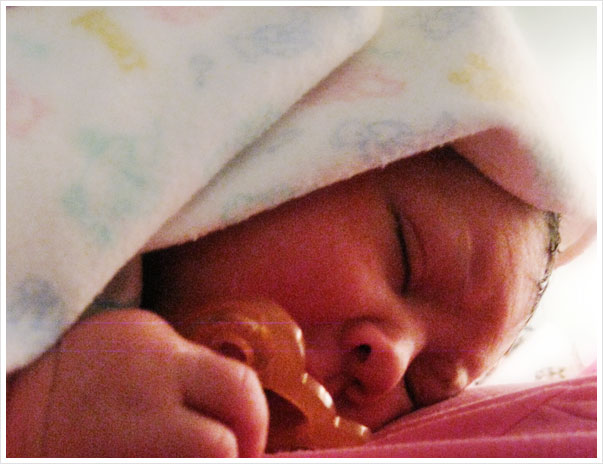 Today was our first “outing.”

My feet, while they had recovered somewhat by Sunday evening, were back to being painfully swollen.  Mom decided getting me out and walking so that blood could get flowing was a good idea.  I agreed to go only because I was feeling a little stir crazy.

We got Tess’s shoes on.  We loaded up the babe.  I wrapped myself in the Moby.  We found keys.  We loaded both girls into the car, grabbed purses and set out on a shopping excursion.  How exciting!

When we hopped out at our destination, I went to put Ellie in the Moby and got a whiff of a full diaper.  THEN I realized what we had forgotten.

We had left without the diaper bag.

Mom and I both had a good laugh over it and then I shoved Ellie’s stinking bum into the Moby and we shopped anyway.  Because that’s the kind of mom I am.

But seriously – how could we forget the diaper bag?  It’s been too long – we’re out of practice.  People think I’m kidding when I say we wean our kids off the diaper bag at around 6 or 7 months.  We tell them they have to get their poop in a group and then we head out, unburdened and fancy-free.  It really is liberating to be loosed of the shackles of the D.B.

Today, how I longed for those same shackles!

In the future, you can be sure that the diaper bag will be the first thing we grab.

Okay, the first thing after the baby.