About a week ago, Philip looked across the table at me.

And wouldn’t you know?  He really did know how to count to one hundred, all by himself.

To celebrate/show-off/mark such a grand occasion for the little man, we did some 100 based activities during school time.  never mind that when it came down to actually doing the said activities, Philip ptiched a fit while Tess and Max dug in with both hands. Yes, I’d rather just forget Philip’s response and remember how cool the projects were.  (I’d also like to forget the mess you are about to see, but what can you do?) 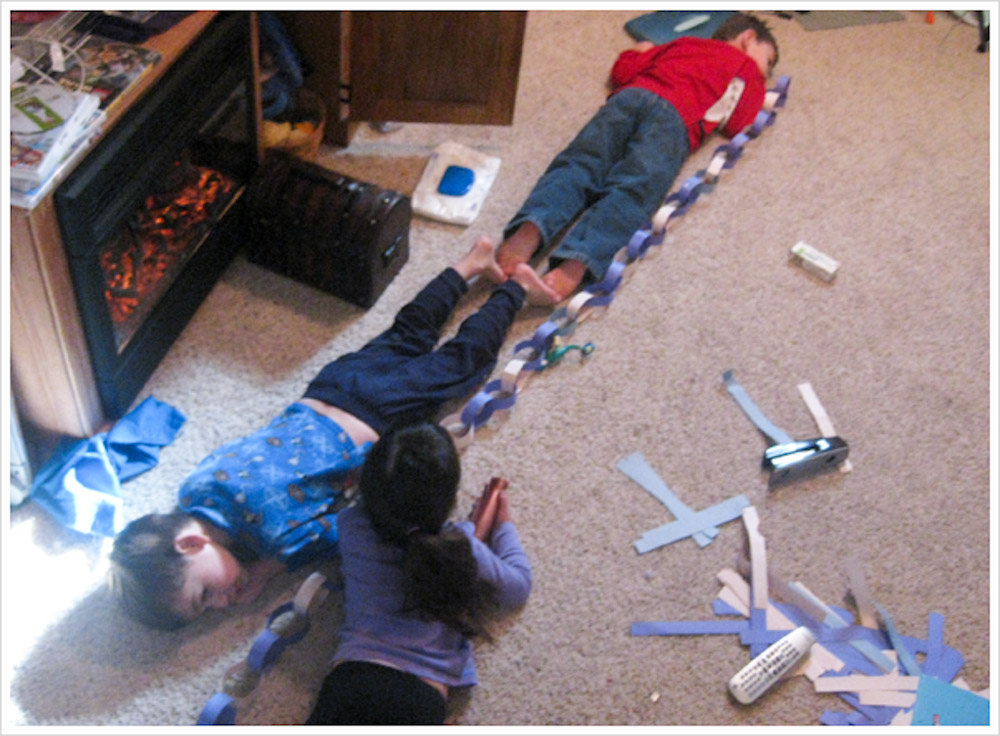 So, first we cut paper into strips to make into a chain that could be 100 pieces long.  How long would that end up being?  What pattern should we make it?  How would we keep track of how many had been done? (We had more than 100 pieces of paper, you know, for emergencies or when Monday or Tess trampled the chain in their excitement.)  30 links was longer than the boys but not longer than all 3 kiddos.  And yes, Philip was still in his jammies – mismatched at that.  He was having a tough time with listening that day . . . 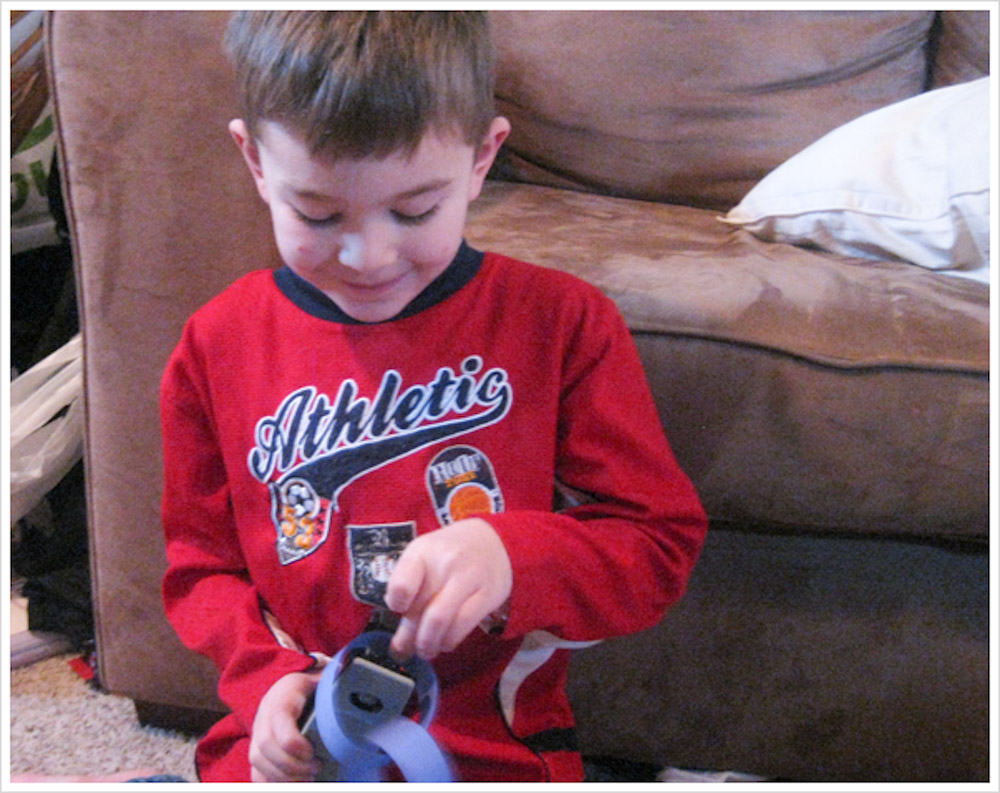 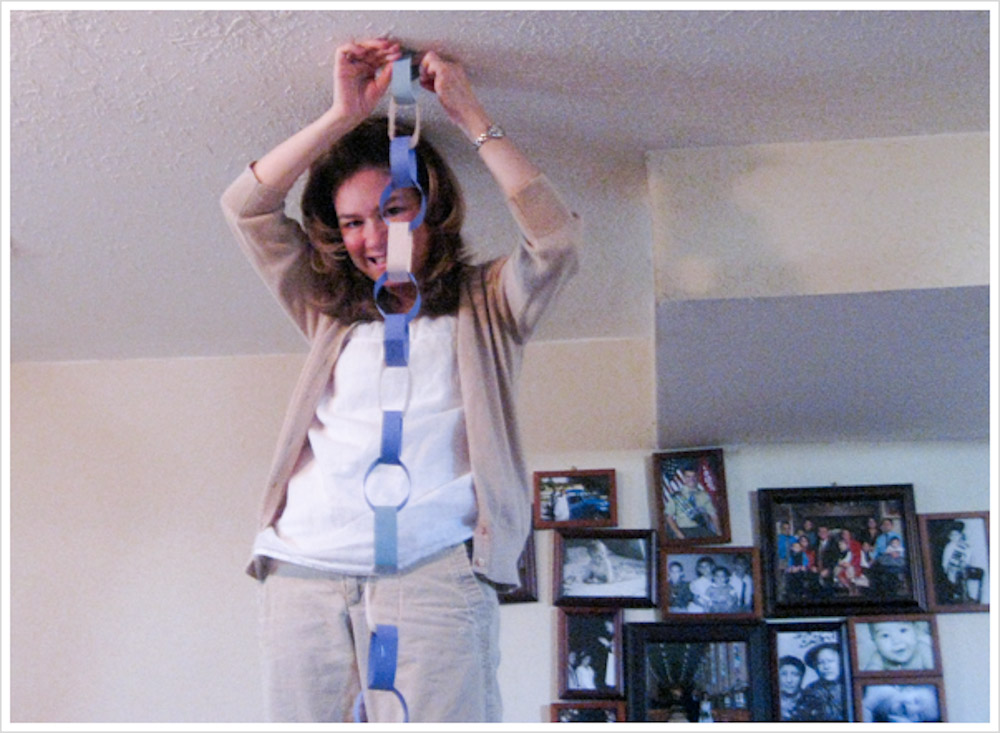 40 was tall enough to reach to the basement ceiling and leave some on the ground. 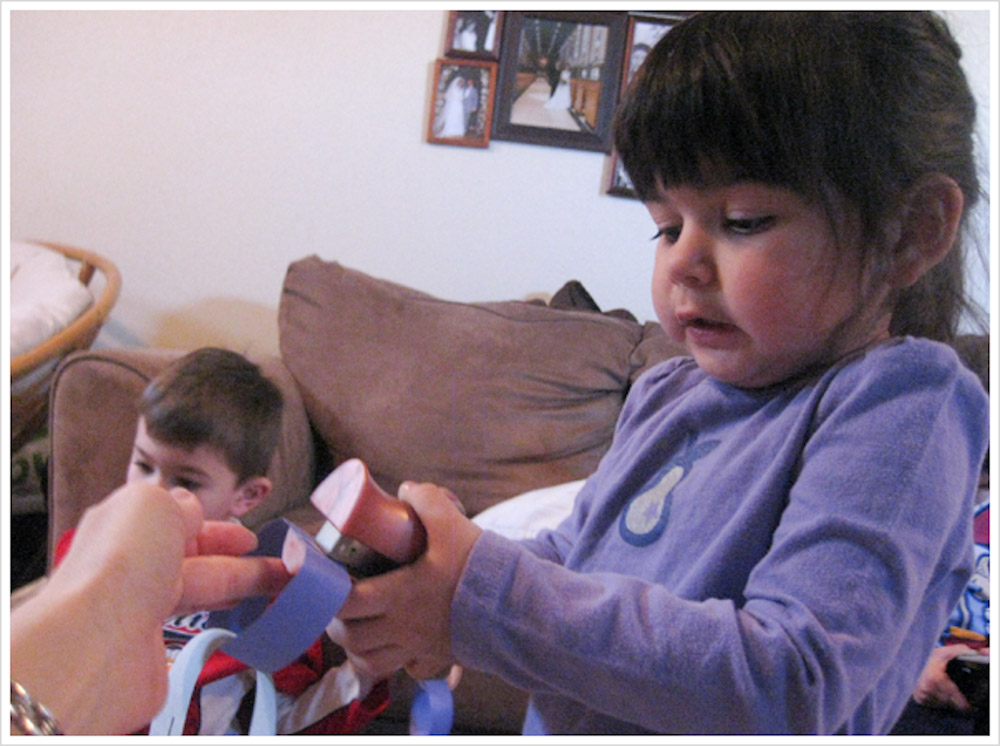 Back to work!  Tess was very fond of “stampler-ing.” However, in characteristic fashion, she tended to get a little over-zealous and I feared for the safety of my fingers. 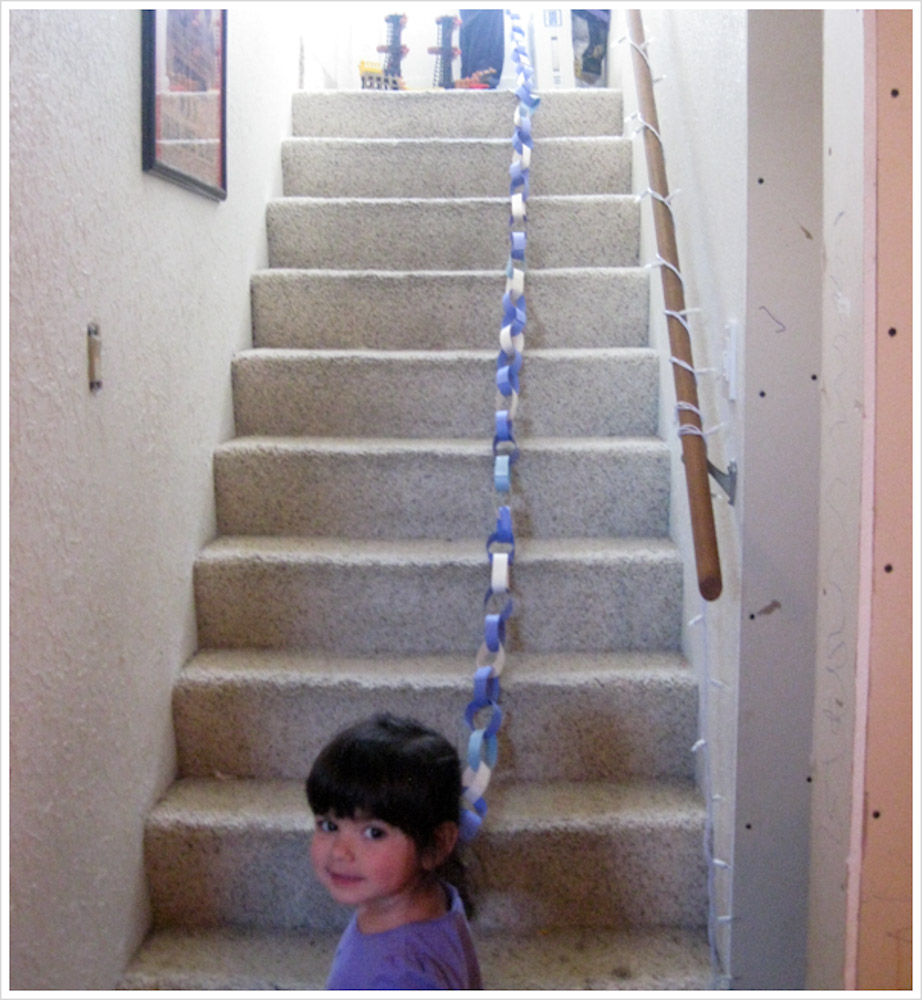 50 stretched the length of the stairs. 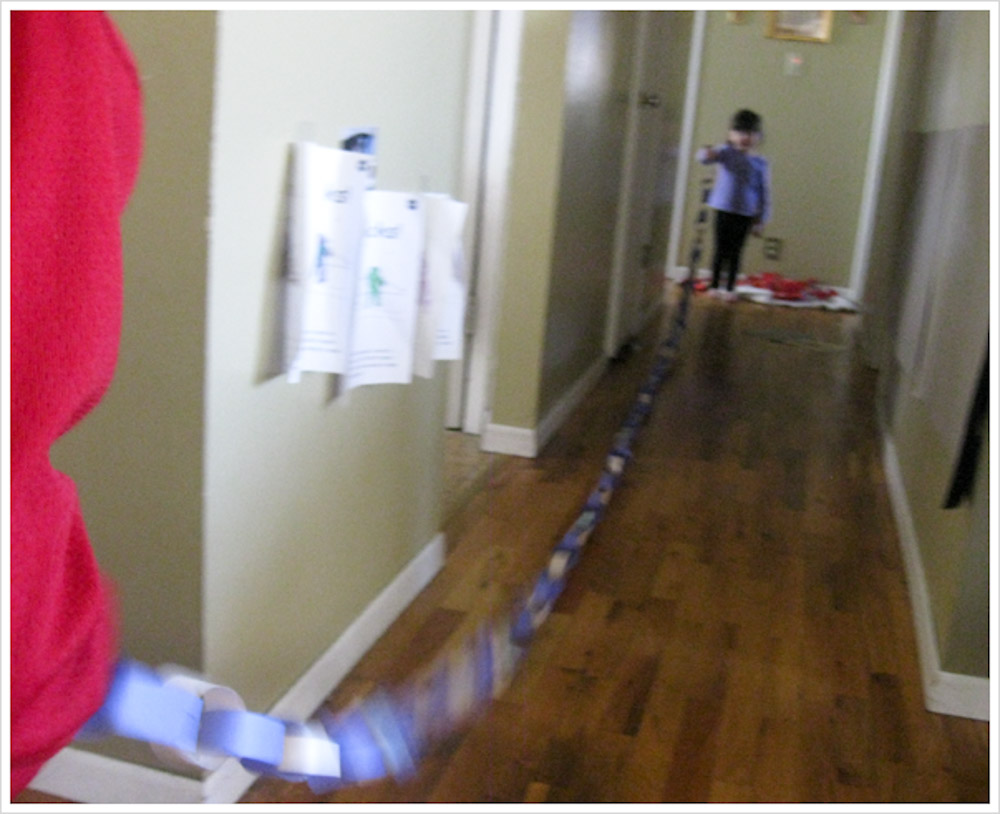 70 went all the way down the hall.

Philip helped me number the finished product and decided it should be hung corner to corner in the living room.  “Look, mom!  The light blue and the dark blue and the white match our decorations from Fr. Tyler’s birthday party!”  It’s like it was planned or something . . .

Unrelated to the lesson, they found an empty laundry basket and began to push their sisters up and down the hall.  When Max wandered away in search of Legos, Tess and Philip took over and began carrying Ellie in the basket.  Then they discovered she really liked being swung back and forth while being walked around.  Oh, yes, fun was had by all and I didn’t stop it because everyone was laughing instead of crying/whining/bickering. 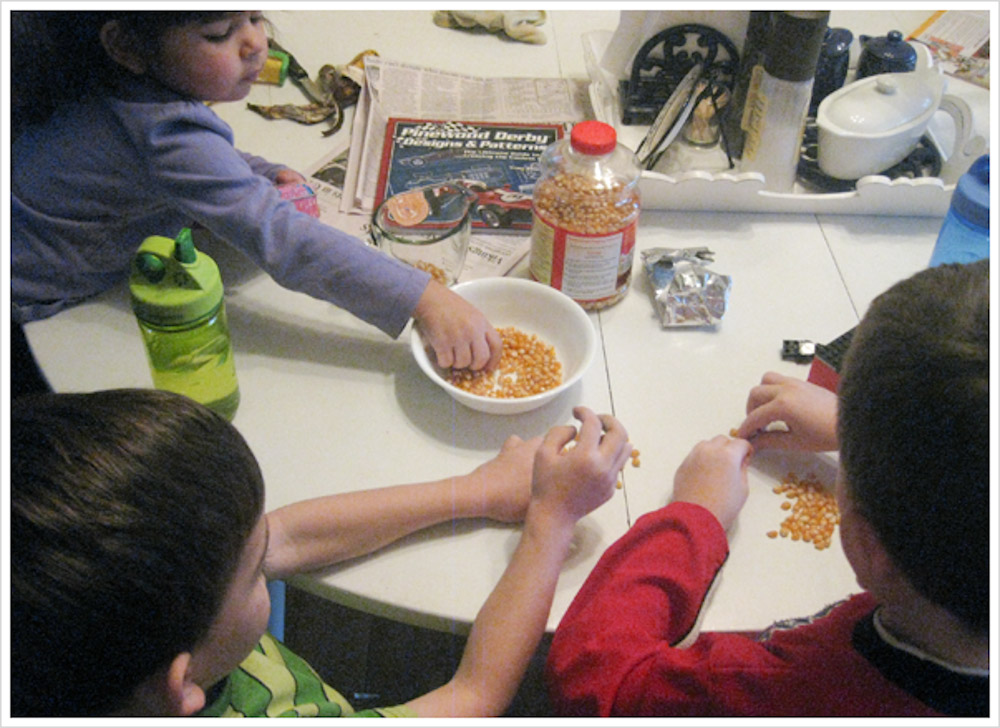 After nap, they had an “organized snack” and counted out 100 kernels of corn to pop. 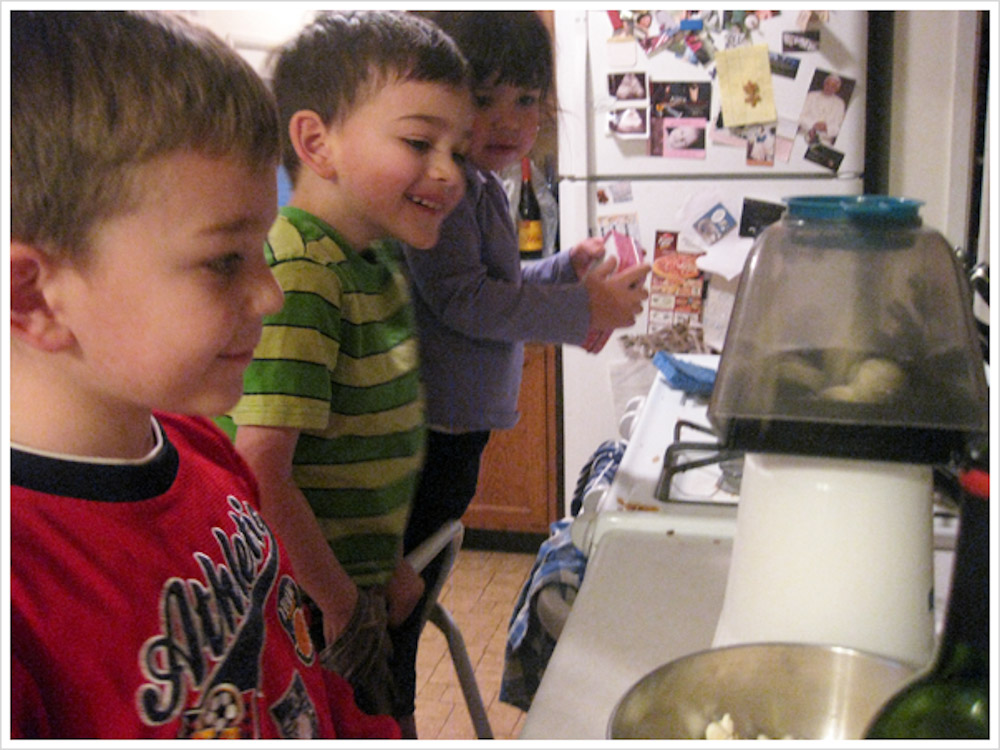 It turns out 100 pieces of popcorn is really not all that much so we poured in some more for good measure and then became mesmerized with the miracle of an air-popper.  Always a crowd pleaser!