When we were in your class, you made it very clear that we could stay in touch.  Send a postcard, you’d say, and let me know how you have turned out.  You smiled reading those notes from past students and Iwould think to myself, “Someday.”  You’d remind us that you had a lot of students and you’d need us to remind you of our class and year if we wanted even a chance of you recalling us.  So here goes:

I am Annie Daniel (nee Reyes) and I was in your AP English Literature class, sixth period, Senior class of 1998. I was scrawny with long curly (some would say frizzy) dirty blond hair.  I sat on your left of the room, right in the turn of the desks.  I was in front, right in front of Gabby Reynoso and, oddly, next to James Dolan.  I’m not sure how that worked out as you had a strict alphebetical seating policy but I think it had something to do with his inability to keep his mouth shut in his rightful seat.  I recall something about you hoping the quietness of Gabby and I would rub off on him.  It never really worked.

Anyway, I write now, 15 years later, to tell you the impact you had on me.  Sure, I had other memorable classes in highschool (Mr. Johnson should have been fired for his shoddy Spanish class but hearing Toy Story in espanol has stuck with me.  I can’t remember much about genomes and DNA sequencing from AP Bio but the fact I have inherited a hitchhiker thumb and my kids haven’t is completely fascinating. Etc., etc.), but yours has been the longest lasting.  I appologize now for my mediocrity, for my less than stellar class involvement.  I’ll be honest, you scared the living daylights out of me.  Or, more exactly, you intimidated me.  And that was your goal then, wasn’t it?  You knew that the secret to being a good teacher didn’t mean being a friend but creating boundaries and setting high expectations.  I complained bitterly and vociferously that entire year but  enjoyed every stinkin’ fear-filled moment of your class.

While other teachers didn’t decorate their classrooms out of laziness, you kept things spartan (see what I did there? Wink, nudge!) and we understood it was purposeful.  A calendar.  A poster or three of YOUR favorite art work.  No family or pet pictures graced your desk.  You were neat and orderly and demanded the same of us.  You dressed the part – down to the unrepeating shoes – and voiced loudly your disgust at the other teachers who refused to wear professional attire.  Mr. Josten across the hall in his shorts and golf shirts must’ve drove you crazy. To this day, I cringe a little at jeans or gym shorts on high school teachers.

Your insistance on weekly vocabulary words as Seniors seemed ridiculous at the time, but my vocab notebook went with me to college dorm rooms, apartments, my newlywed home and now my homeschool supply cache.  It is among the things I would save from a burning building it is that important to me.  Even now, when my kids ask, “What does that word mean?” (It happens nearly every day.  We’re big on vocabulary.) I insist on giving the definition without the word as a part of the definition.  It is still difficult!  And  when someone follows “myriad” with “of,” I immediately roll my eyes and deem them an uncouth pretender.  I think of you every time.

In my bedroom (TMI?), hang two Pre-Raphealite paintings.  Both gifts from my husband, “The Two Crowns” he gave me on the night he proposed.  Pre-Rapealite books take prominent place on our book shelves (‘Shelves’ as in multiple.  Are you proud?) and the artwork has been important part of my life since your class.  The Lady of Shallot was given to me by my best-friend as a graduation gift and The Lady has had a home in each of my homes since then.  I knew and liked the style of art before Ms. Barr’s class, but you brought it alive for me.  I loved how you would bring around images of paintings as we studied the poems and works that inspired them.  The symbolism was beautiful to me and now I pass it on to my children, showing them how to read between the brush strokes.

And while this letter may not bear witness to it, your class made me a better writer.  Arriving at college, I was placed in second year English because of my placement tests.  One paper in and the professor pulled me aside.  She asked where I had gone to highschool and the caliber of classes I took.  I told her of 3 years of AP Literature. She wanted to know if I had done much writing.  I assured her that my senior year was demanding.  “I can tell.” she said. “This class will be a piece of cake for you.  Don’t worry about it.” I left smiling knowing that it was your grueling course that had done it. Thank you for that.  For demanding better than a first try and insiting that we could always find something that could be improved.  It was a gift.

Anyway, because of all these things, you’re never far from my mind.  But I’m prompted to write this letter because of the expectations you put on us for graduation.  You see, we have  a newly graduated senior in our house.  Not ours, mind you, but the story is multi-layered and complicated.  Suffice it to say, I have a newfound respect for being with us everyday and actually getting something out of us.  It’s been a hard-fought, hard-earned victory to see her to commencement.  I began to recall all of the dos and don’ts you had for  us.  She WOULD wear a dress for graduation.  There would be no high heels, naked toes or flip-flops in sight.  She WOULD press her gown and if she had been given a collar, I wouldn’ve insisted she stitch that on, too.  But alas, what is the world coming to?, there are no longer collars on gowns for girls so she was spared.  And on Sunday, when she asked me what she whould do with her hair, I offered some suggestions but made it clear that the mortar board needed to be flat on the top of her head. (It was the boys who had high bangs and caps dangling off the back of their skulls.  You would have been scandalized.)

In the end, she looked great.  She delivered the first reading at the baccalaureate mass and did so beautifully.  We sighed with relief right along with all of the grads when the speeches were done (some of the best and most tasteful I’ve ever heard) and the names were called.  Pride and joy – I tasted them in a new way Sunday and I thought of you.  I offered a prayer of thanksgiving for what you had passed on to me that I could pass on to her and then each of my other 6 (yes 6!) in turn.  It just seems right to  acknowledge your impact during this season of graduation. So, fifteen years later, thank you. 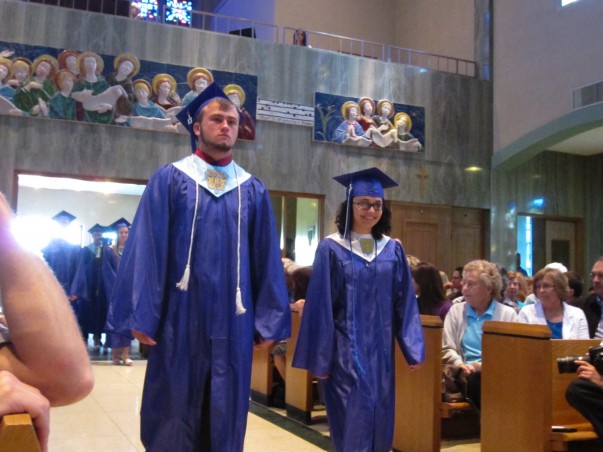 Congrats, Sabine!  You did it!  We’re so proud of you.