This is what it looked like at our house tonight: 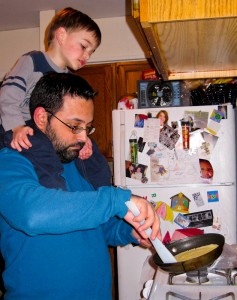 That’s right, folks.  Jac’s a fan (the French club serves them up at STM’s Mardi Gras each year – it’s the only reason he attends) and was super stoked to try them out after seeing them in Martha Stewart Living this month (my man reads Martha.  You got a problem with that?).  Philip was excited to help.

But even more excited to try them.  Nutella aka “Chocolate” makes everything awesome.  He deemed them good – a 5 star rating from the pickiest in the house. 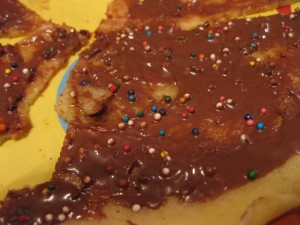 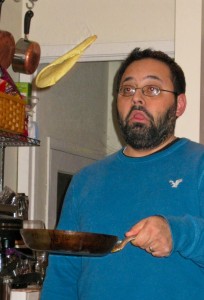 Jac showed off his mad flipping skills – he’s been practicing on my omelets all week.  He’s really good at it and it always garners cheers from his fans (that’s us). 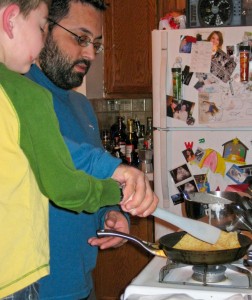 Max made a valliant effort to try and pretend to like them.  But he didn’t.  That didn’t stop him from making a few, however.

More blueberries were eaten.  Still the ones from Sam’s Club – I can’t say enough about them.  They’re Dole – picked ripe, flash frozen (it’s what the package says).  They aren’t all clumped up and freezer burned like the other kinds I’ve had tend to be.  Not the “greenest” choice, I’m guessing, but I like that the kids eat something good for them without much of a fight.  And I hear they’re good for the memory . . .maybe the boys will finally remember to lift the seat . . . it’s okay to dream, isn’t it? 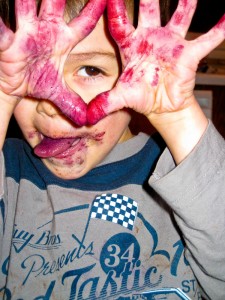 A  tasty ending to our week.