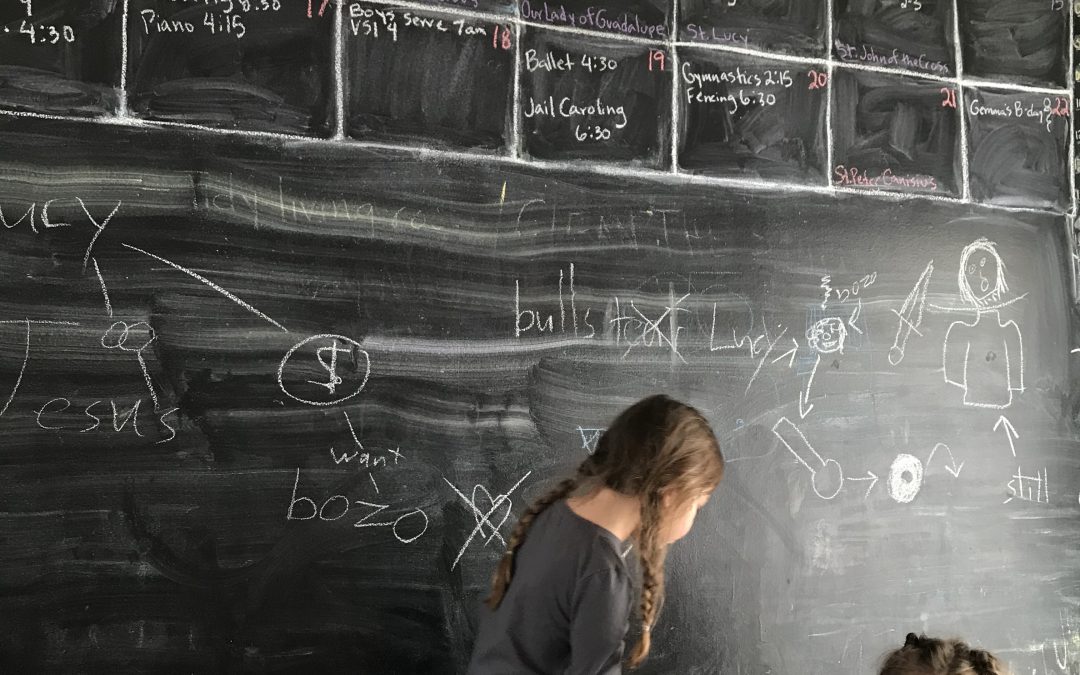 What is that wise and oh-so-pithy saying? “Failure to plan is a plan to fail?”

Right. Planning.  That’s what I should have done for school!

Instead, I just kept saying yes to all the good things and then I happened to look around and realize I have been, in the last week, out of the house A LOT. So much so that Gus starts to cry when I put my coat on.  All of this activity and going and I’m not even doing all of the driving and picking up, we have lovely generous friends who pitch in. I know, too, that the “large” amount of time spent out and about is comparatively small to other folks we know. It’s just overwhelming at the moment.

For me, mainly, and maybe Gus and Pen. Everyone else seems unphased.

Yesterday I took the eldest three to the St. Thomas More Middle School. Tess was meeting the Latin teacher early to learn how to knit from her. Then she would remain there with the boys through Latin class. I had to let them exit the car like parachute jumpers as I had a prescription to pick up and toothbrushes and flossers to grab while I was at it. Then I needed to hustle to another meeting and someone else – Jac? A friend? – would take the kids back home.

“Soooo,” I tried to sound casual, “How do you guys get into the building when you’re early?” As everything is indoors, the building is locked down.  Visitors have to have a reason to enter. The homeschooling darlings that they are, the kids seemed unbothered by this.  They were unbothered, too, by the report I gave them that the day before as we walked the halls of the same school, after hours, the secretaries were highly suspicious of the boys.

“We just push the little button and wait for the door to click.  I give the camera that’s there the stink eye until they let us in.” Max was sure of himself.

Phil had a little more caution. “Sometimes people are coming out and we just slip in.”

“But that doesn’t always work because one time I got stuck between two kids and it was a little scary.” Leave it to Tess to be the realist.

At the school, they did jump out and stride up to the door, heads held high.  I know because, errands or not, I was nervous and needed to make sure they made it in.  But not SO nervous I chaperoned them through the door. my neuroses are complicated.

I watched Max press the button.  More time than necessary lapsed. I told myself the secretary had stepped out.  And then she DID step out, opening the door and blocking the entrance to the building. Even from the curb I could see she was skeptical and doubting. She checked over her shoulder, cocked her head and considered. Finally, she stepped aside and the kids were swallowed up by the building.

Later, when we were reunited for 10 minutes before splitting again, I asked what had happened. Max confirmed that the woman had asked questions and was reluctant to let them in. “I just gave her the stink eye.” he said.  Helpful, I’m sure. Then Tess and Phil chimed in that kids were looking at them funny (perhaps it was your jeans and camo shorts in the midst of all the uniforms? No?) and giving them the stink eye. “I wanted to give it back, but I didn’t. I was just kind of like, ‘Heh, heh, heh!” Tess confessed.

Maybe it’s because I have been the one on the inside looking out, as it were, that makes me feel defensive for the kids when they don’t themselves. Whatever the reason, it made me think of our current Read-a-loud, Watership Down.  How the rabbits, the wild ones, meet up with pet rabbits in a barnyard.  The pet rabbits are afraid of, confused, and generally weirded out by the wild rabbits.

“It’s because you guys are from the wild! You’re free range kids and they’re not sure what to make of you!”

The kids shrugged their shoulders and left it, again completely unfazed.

And I made a plan to hold on to that idea and embrace my free-range, wild-child chickies and all of their activities. I can’t fail then, right?