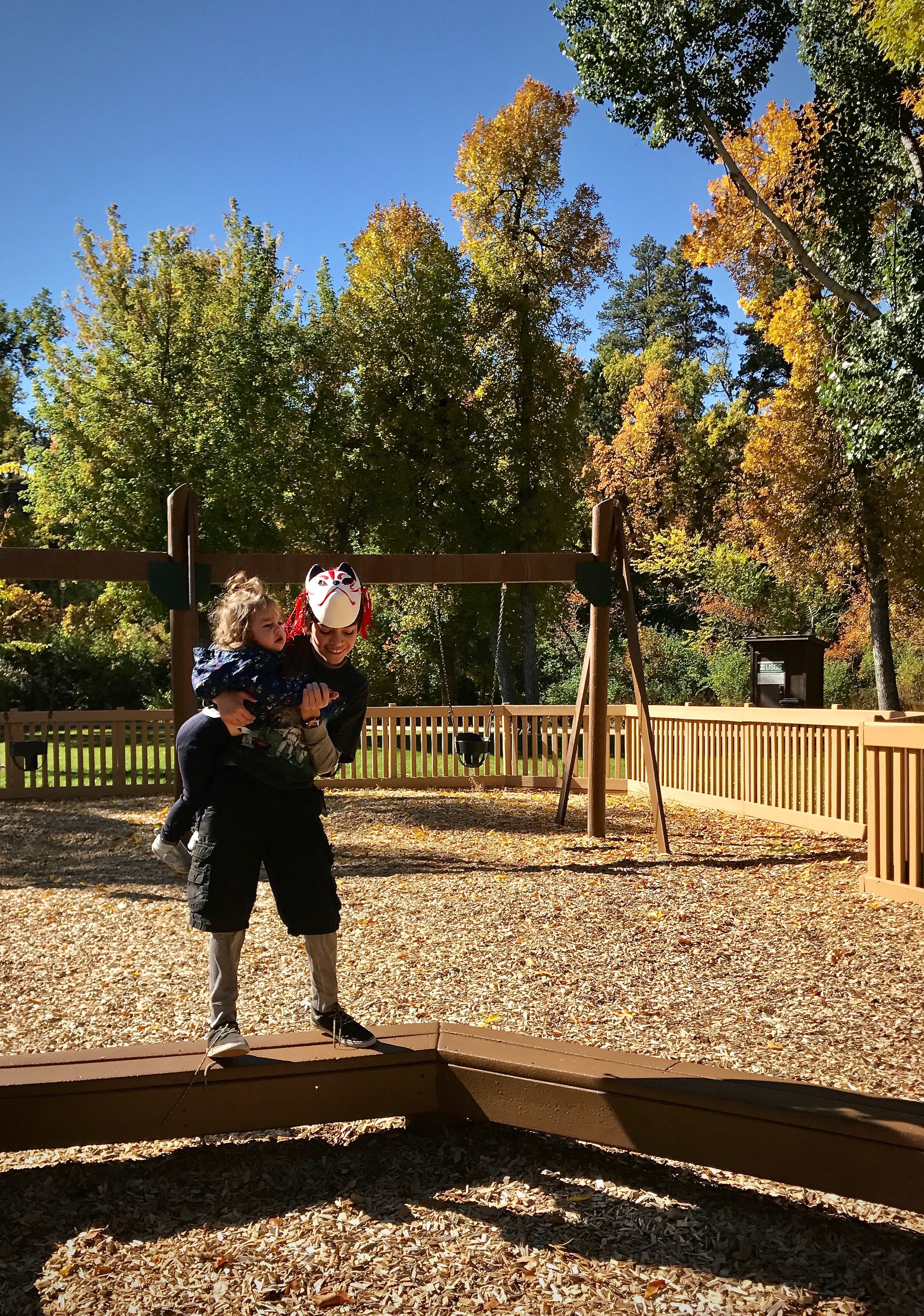 We made a quick trek up to Spearfish today on an errand for Jac.

“If you go potty and find your shoes right now, we can listen to The Edge of the Dark Sea of Darkness on the way AND go to the park when we’re there.”

There was a mad scramble while Lucy clarified that I did in fact mean the Spearfish park.  When that was made clear, she yelled, “Woohoo, guys!  We’re going to the park in Spearfish!”

I watched my “big” kids wander in to the park, their body language making it clear that they were 100% oblivious of being the only non-preschoolers in the joint.  They carried books and journals and dolls under their arms “just in case” and Philip wore a mask.

I was stunned by the boldness of my children and the level of homeschool chic and weirdness we were rocking. It left me speechless.

The speechlessness spread to Tess when we ran into Safeway for some lunchables.  Turns out that noon is straight crazy in a grocery store.  The lines were loooong and I was watching the clock sucking the minutes of our return trip and time commitment away.  Vaguely I registered that the two ladies in front of us were visiting about being teachers. When the one right in front of us asked if we wanted to go ahead of her, I jumped at the chance.  But within seconds, she turned to Tess.  “And where to you go to school?” Tess was like a turtle, drawing back, her smile shaking. “Uhhhhhhhhhhh. . . ” Again with the speechless and the ticking of the clock and the weirdness!

“That’s what I thought.” the woman said.  I laughed more than I should have and prayed the cashier would hurry the heck up.

So tonight I should not have been shocked when in the comfort of our own home and slightly after hours, the kids flew the homeschool crazy flag whilst playing Catch Phrase. I didn’t think it was possible to play that game like a homeschooler but I was wrong.

“It is supposed to be quick, guys.  Concise.  Try to get in as many as you can.”

But these kids? The most random, drawn out, odd descriptions for words.

“Okay.  So a round dessert that is orange. . . made with a melon that is related to the rose.”

“A kind of music.  Azure stuff-that-grows-on-the-grou-”

“The most expensive ride you’ll ever take.”

“HEARSE.” Max pointed at him.  Then, pointing at each other they said at the same time, “Fr. Christensen!” then laughed like crazy.

And that’s what the game was.  Craaaaazyyyyy.

Over and over their quirky weirdness left Jac and I in the dark.  Still sorting through how I feel about that.

Best line of the night, again, came from Philip. “People who believe the stars can tell their fate or affect their life are practicing?” “Witchcraft?” Philip answered at the same time Jac said astrology.  The point went to Jac but I held that I liked Philip’s answer better.  Keep on my weirdies.  Keep on keeping on.