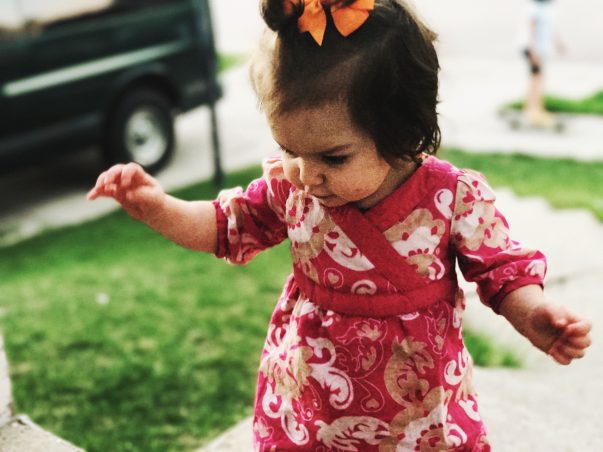 We lost Penny this afternoon.

Okay, maybe “lost” is too strong of a word.  “Misplaced” is probably more accurate.

Anyway, it was a gut-wrenching, frantic, panic-inducing 3 minutes.

It started simply, with the girls in and out of the house through the sliding glass door.  Penny had been traipsing along with them but at some point they all scattered.  The quiet was what triggered my concern.

Radio silence. I upped my volume.

“Has anyone seen Penny?”

Tess was the first to respond followed by Max.  She ran outside to check and he poked his head into rooms.  We hollered her name and checked all of her usual spots.  Others joined the search and the lists of dark possibilities rang in my mind like the totalling of a cash register.

“She’s not out there!” Tess was breathless as she came inside.  I’m unsure if my eyes matched her wild expression but I was less than comforted by her look.  Could someone have left the gate open?  Could she have wandered towards the street? I ran out front quickly and when I got back, I heard a muffled question from Jac.  I hoped he was saying she was with him.

“Did you find her?” He was at the top of the stairs, panic on the edges of his voice.

I didn’t think my heart could sink any further but it did.

And then, just when I was on the edge, I saw the faintest motion past the trampoline.  Her little ponytail was being buffeted in the wind.

I’m not sure why I ran to her.  She was safe and fine.  But watching her hauling a doll out of the Cozy Coupe and struggling in the wind combined with my overwhelming relief sent me out.

“Pen-pen!  You scared us!” She saw me running and thought it was a game.  She smiled her crinkled nose smile and ran to meet me.  She squeezed me back and patted me when I picked her up.

In that moment, I really, truly understood Luke 15:4.

“Doesn’t he leave the 99 in open country and go after the lost sheep until he finds it?”

I’m not one to suggest changes to scripture but I’m just saying that “lost child” packs a greater punch.  Then, too, I have never much liked the Prodigal Son (I’m the eldest, remember?) but I understood the father running to his son today.

What was it that left me shaky and oh-so-grateful to hold her little body against mine and to feel her happy hands on my shoulder?  We’ve lost kids before.  (C’mon.  Don’t act shocked or like it’s never happened to you.) Was it because she isn’t talking yet so she couldn’t respond to our calls?  Perhaps knowing her speed and her curiosity  was what lit up my imagination.  Whatever it was, I was abundantly thankful that she was found and that I have been found, too.  May I turn with a crinkled nose to the Father who runs toward me even in my faults and failings and may I press into him, patting him back, grateful to be loved. And thank you Jesus that we found our girl.