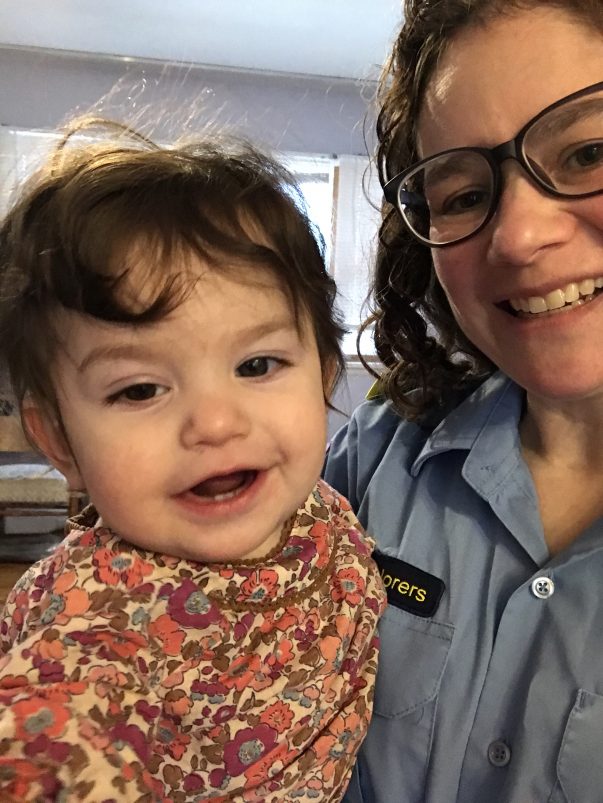 Imagine, if you will, that you are hanging out at our table.  For funsies, you suggest a game of word association.

(Here Philip covers his ears and leaves the room.)

(The kids left in the room erupt into laughter.)

Yes, my precious babe resembles a vicious dinosaur.  She seems friendly enough but she has razor sharp teeth, a penchant for destruction and a scream that induces sheer terror.

Honestly, the scream  . . . ! It started as a way to express displeasure at the sometimes overzealous attention of her sisters.  But now? Well now it’s used as a general “Listen to me!”

Poor girl, she so badly wants to communicate but is having a hard time being heard in the chaos.  Being heard when she isn’t screaming, that is.  She’s been reluctant to use signing, opting to only utilize “All done” regularly until this past week or so.  Seemingly overnight she picked up “Please,” “Food,” and “Nurse.” Then last night as she played with Monday, she started to say what sounded like “Monday.” She repeated it again and again.  Excited, I asked her to say “Daddy” and she did several times. That’s when Jacques asked her to say “Mama.” Without pausing, her hand shot out and she rapidly signed

We laughed because it was hilarious but also because it confirmed my suspicions- she only likes me for my body.  It’s cool as long as she’s not screaming. ANYTHING to keep her from screaming!

(My laughter becomes nervous and then turns to crying. There’s so. much. SCREAMING.)

Update: tonight she said “Mama” a few times! But then when Jac clarified if she was indeed saying “Mama,” she signed “Nurse” again.  Baby steps, right.  Baby steps.