We are well loved by the people in our life. So much so that’s i fear the kids might take it for granted, that it’s a given to be so generously cared for. 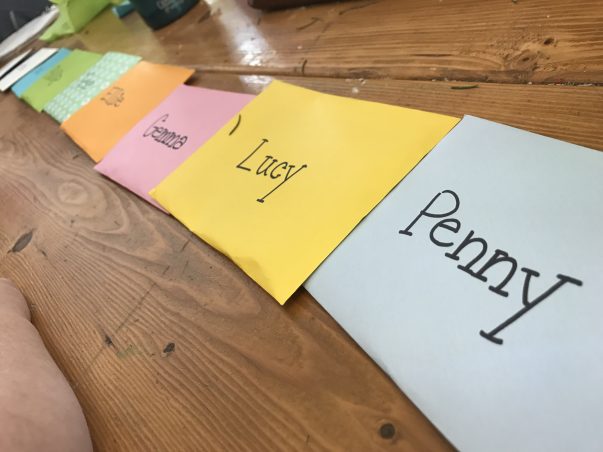 On Monday I realized that Wednesday was Pi day and mentioned it aloud absent mindedly. A few hours later the mail arrived and the kids clamored around when Jac handed me a package.

“It’s for mom so that doesn’t matter.”

I announced it was from Chrisa.

Chrisa’s fun-filled Pi day packages have repeatedly been a mid-March blessing and it made me smile to realize that they have become something that the kid’s look forward to.

This year’s box was heavy and I could hear coins. As I started to peel back a flap all of the kids yelled.

“No! We have to wait until tomorrow!”

They were particularly cooperative and quick Tuesday morning and they all gathered about me expectantly when prayer was finished. Upon opening the box we found a wrapped bundle that Gemma opened. Inside was an envelop for every individual in the family. Anxiously they tore their envelopes open. Out poured coins and a card. 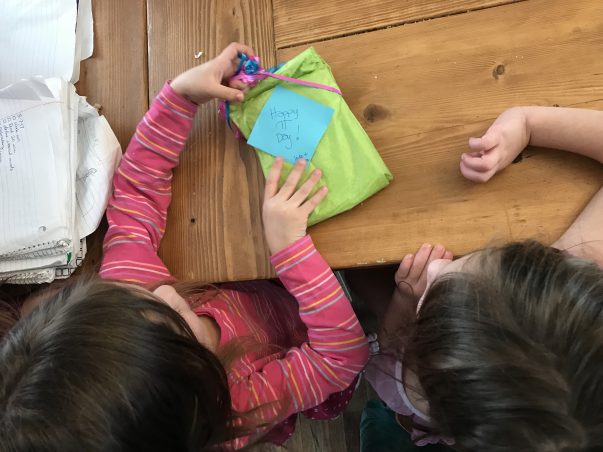 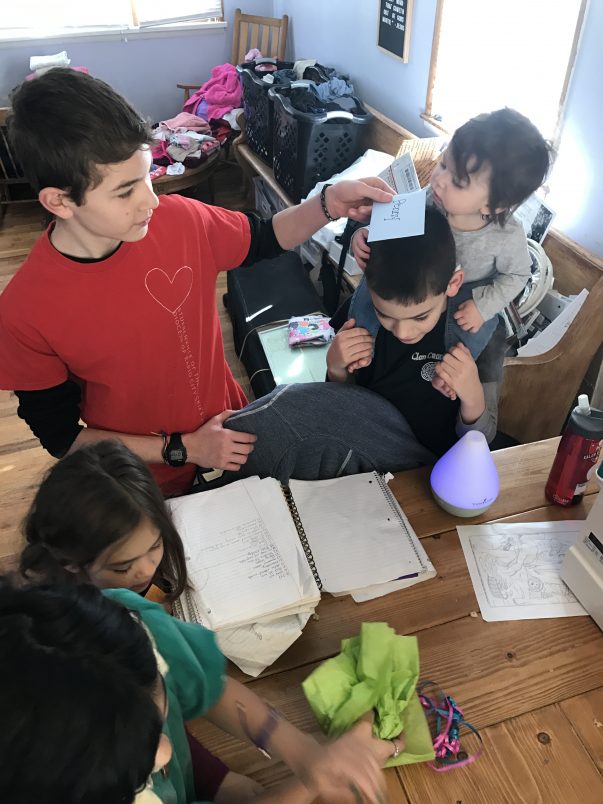 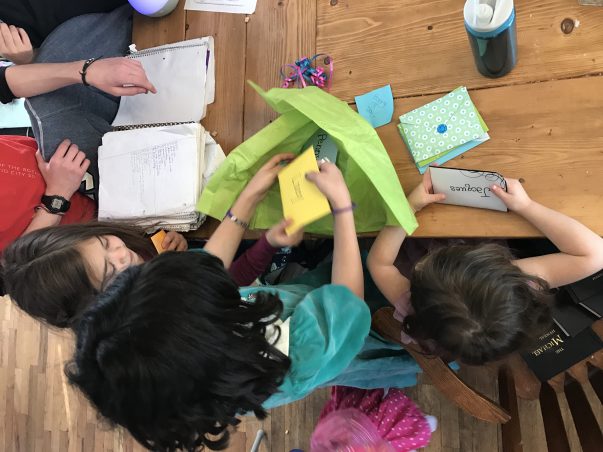 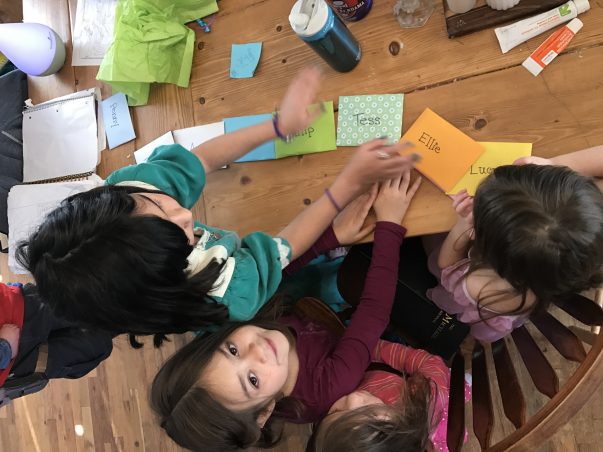 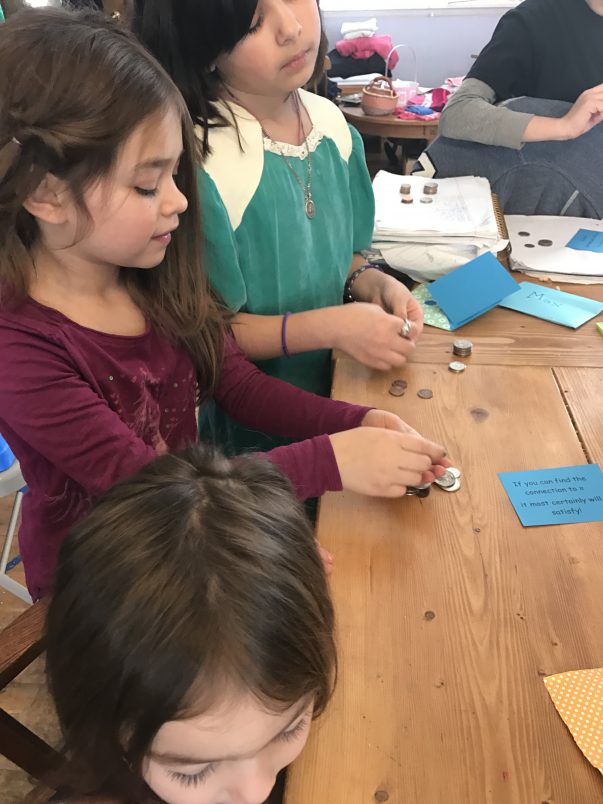 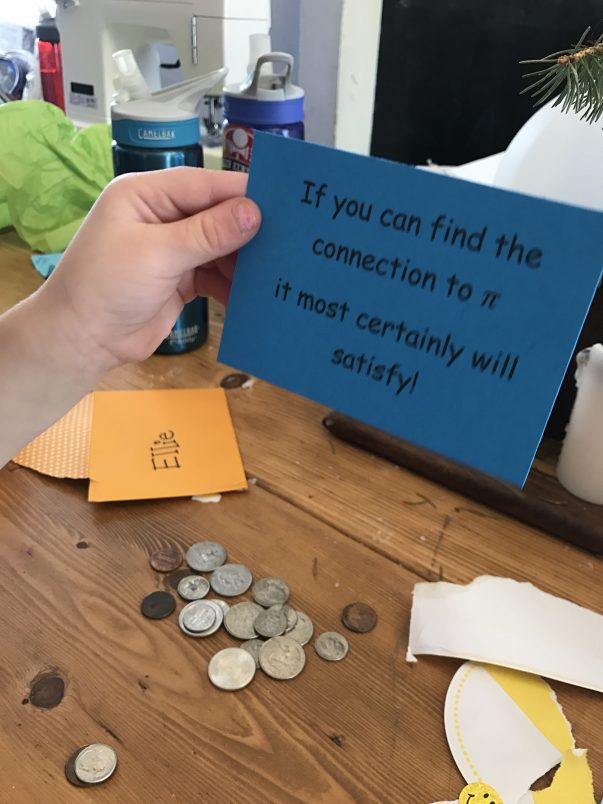 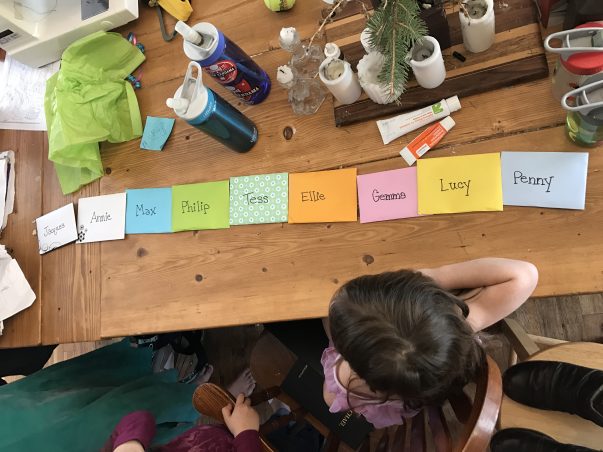 They were lightening fast in figuring out that the coins added to $3.14.

A short debate followed with factions arguing for and against individuals keeping their money or pooling it for pie.  I knew Chrisa’s heart would rejoice over how they multiplied 3.14 by 9 and then asked what a trip to Perkins would cost for 2 pies (as there are chocolate fans and fruit fans and only a few who swing either direction, thank you very much). After a quick call, they added up the two pies and subtracted that from the total. We pacified Gemma and Lu by allowing them to keep a few Penny’s and made big plans for a treat after FNE.

Alas, everyone else in Rapid City also made plans involving pie and when I made it to Perkins Tuesday evening nary a pie was left.

We made amends on Wednesday and all really enjoyed the deliciousness of being loved and remembered. 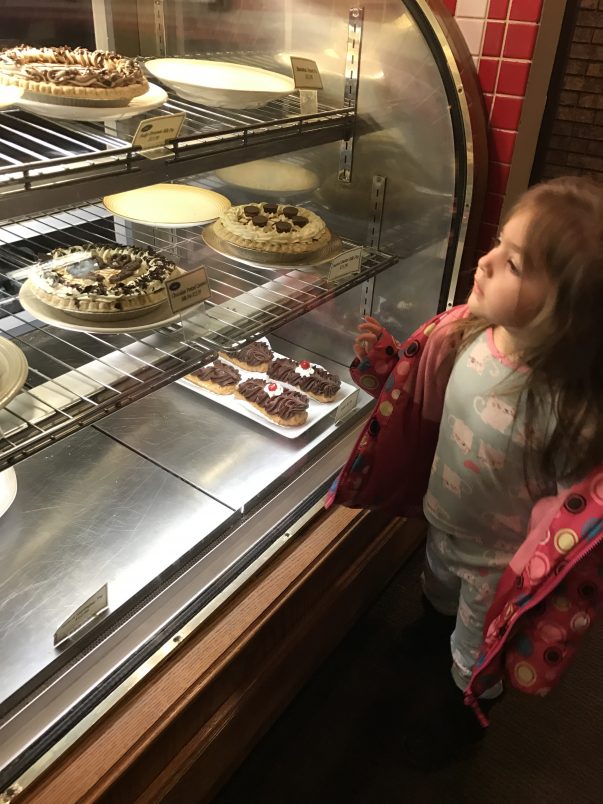 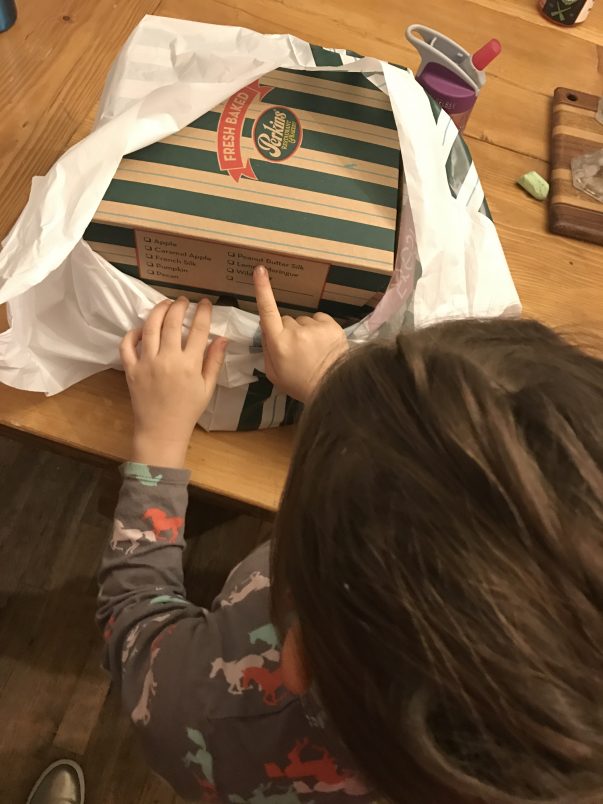 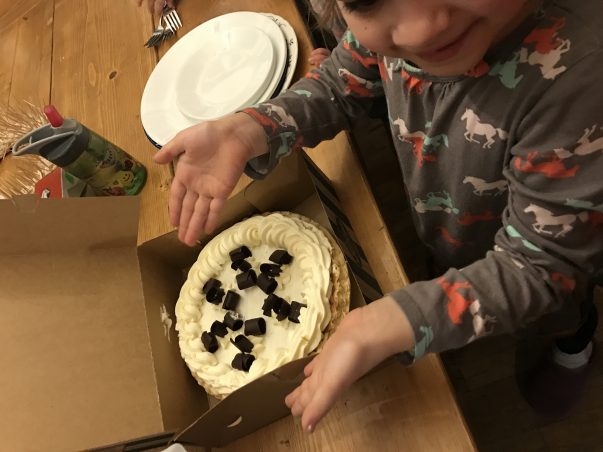 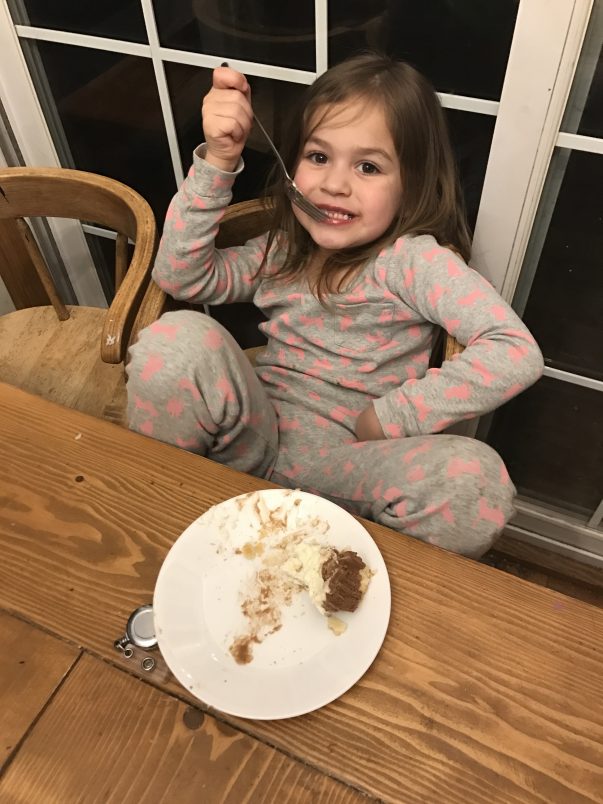 It was possibly even sweeter for breakfast. At least Penny thought so! 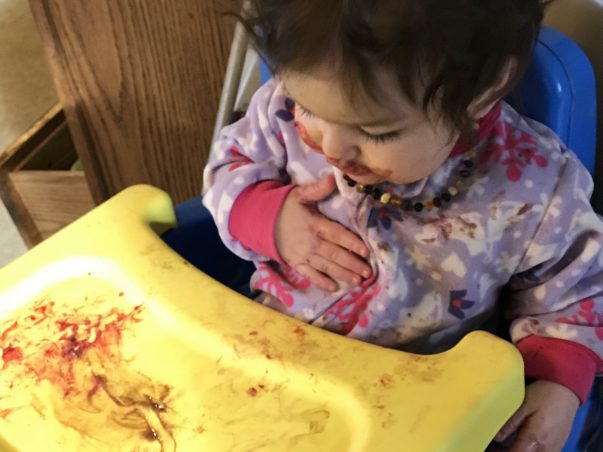 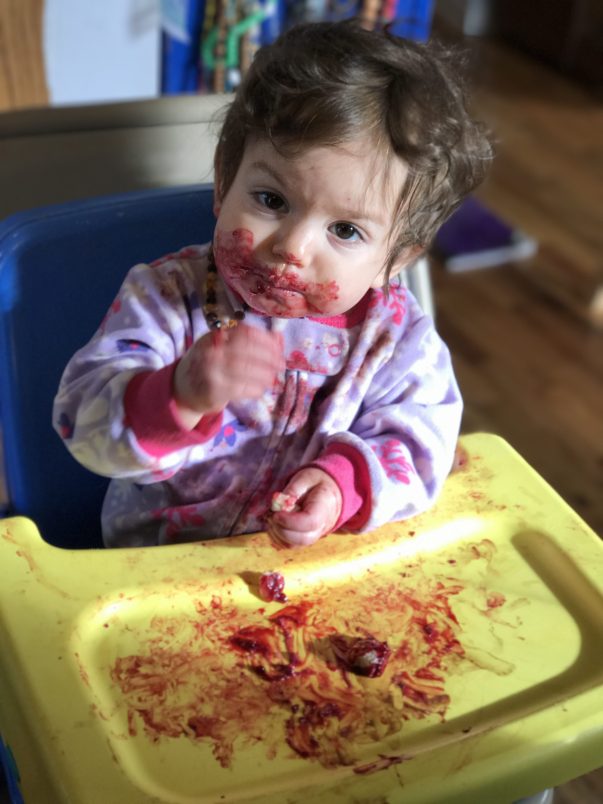 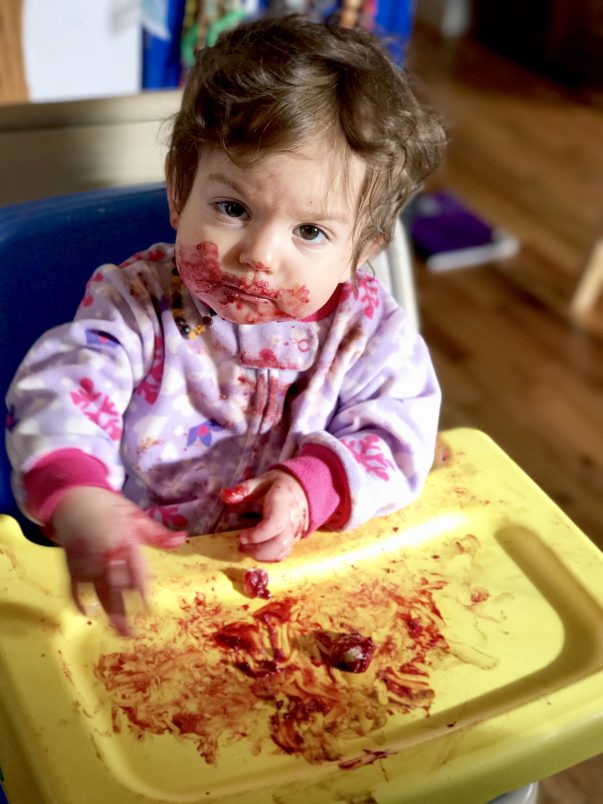 (Gemma chose to paint the walls with the remainder of her Thursday breakfast. She then learned how to wash chocolate silk off the wall. That kid.)