At the moment, we are climbing the Sierras in the van with most of us sick. You have requested to listen to Hamilton at least a half a dozen times and are rolling your eyes at our California themed play list. Someday this will be the soundtrack of your memories. Someday.

It’s been a little over two weeks since Papa Bill passed away and I haven’t had the words or the heart to write about it. Writing makes me feel things and I have been numb. Numb with stress and worry and work and the next thing on the list. Someday you’ll understand. Someday.

I want you to remember Papa. That’s the hardest part of this loss for me-the fact that Lu and Penny and probably Gemma, too, won’t remember him. We will share stories and laugh over photos and sing the songs he sang but they won’t remember his dignified stride, his laugh, the weight of his hand on their head. I wish I could have bottled those things up to bring out and share as I willed. Life doesn’t work like that though and we are given the gift of loss to savor the now. I know you don’t understand that and truthfully? I don’t either but God says someday we will. Someday.

Anyway, there will come a day when the memories of this trip have become fuzzy. Maybe you’ll remember the bag piper or the time spent at the Wyeth’s or cousin Kathy and Saboin. Maybe you’ll recall the sickness or build-a-bear or any of the other things we did these last two weeks. So I want to put down Papa’s eulogy I gave for us to remember. It gathers up some of the best lessons he gave and someday you will appreciate it. Someday.

I was voluntold that I was to read the obituary today. However, as I reflected on it I thought that it would be unnecessary to do that since it is printed in the programs. But if you’d like to have it read to you, please find me afterward because I have 4 of my children that can do that for you.

It is a daunting task to sum up the life of someone,  especially for a man who lived a life as rich and as varied as Papa Bill. I have been overwhelmed with the desire to include all of the important memories to everyone. However, that is impossible and the truth is most of you are here today because you have your own memories of Papa Bill. Thank you for coming and I ask you to treasure and cherish those memories and share them with us at the reception!

With that said, what I will share with you today is what I hope my children will know about Papa. And I know he was known by many names and titles but I hope you won’t mind me calling him Papa Bill because I couldn’t call him Bill even if he wanted me to.

Papa Bill was an educator through and through and he was always teaching. Every conversation was an opportunity for a lesson though it was seldom explicitly stated as such or heavy handed. And so I want to share with you some of the greatest lessons he taught us.

He taught us to value home and where you came from. Born in 1928 in Lead, SD, he always considered it home. A number of years ago as we biked the Michelson trail. he shared with us that it was the same route he took as he rode a train away to service. He said he cried as wondered if and when he would ever see his beloved hills again. And not a trip went by that he wouldn’t declare upon arriving in South Dakota that no where in the wide world -and he had seen a lot of it! -had skies as blue as SD. Loyal, he stayed in contact with his high school class through email and facebook -because he was into those sorts of technologies-and attended many reunions. When he moved to Tuolumne, it became his second home and it was love for Tuolumne County that flowed through his veins. He felt like belonged there and never forgot how the community had welcomed him and his family in when they were strangers. He did his very best to return the favor, opening up his home to others and welcoming folks into his family. And as is evident by the presence of the piper and the kilts, he was deeply proud of his Scottish heritage and closely identified with that part of himself.

He taught us that some things are worth waiting for. As a child, Papa loved to eat stale marshmallows.  Laughing, he’d tell us about taking the homemade marshmallows his grandmother made and hiding them in his underwear drawer until they were good and crunchy.  This carried over into stale peeps, a treat that my mom and I still enjoy.  His wife of 60 years was his high school sweetheart who he left at home when he joined the service.  But instead of sending a “Dear Joyce” letter home, he waited, returned and married his love, making her my nana.  And, as many of you were privileged to witness, his beloved kilt was purchased in the last years of his life, a luxury he had waited a very long time for.

He taught us that sometimes it doesn’t pay to wait, either.  In the service, he dutifully fulfilled what he had promised to do, but did not stay one day longer once he had made up his mind that he was through.  He dropped out of West Point because it wasn’t for him.  When he had a young bride, a baby, and a full time job, he packed everything up and headed to southern Colorado to pursue and get his masters degree because it was the right time to him.  He was unable to sit still, always moving on to the next thing, and he was known to announce when he had decided enough was enough, “My coach has turned into a pumpkin!” and that was that.

He taught us there was a right way to do things.  When he was 9, his older brother grew lax in his milk delivery route.  Papa was disgusted that it wasn’t being handled in the right way and took over the responsibility, waking at 4 am to get the milk, deliver it, return the used bottles to the dairy and return home all before school. He taught us there was a right way to hold drum sticks and a right way to march.  He was very opinionated about the right way to drive and didn’t hesitate to tell you if he thought you were not in fact doing it right. Papa even had a right way to wash a car and it was a big deal when I got my first car that he made a special trip down to show me how to wash it correctly.  I still feel a tinge of guilt each time I use an automated car wash.

He taught us that if something was worth doing, it was worth doing well. This fact was evident throughout his life but most especially in the many hobbies he was passionate about.  His HAMM radios, wood working, model planes, real planes, weather tracking and his Bible study were just some of his hobbies he shared with others.

He taught us that life is too good to be taken seriously.  One just needs to look at one of the dune buggies to know that this is true because they look ridiculous.  It was on those dune buggy trips, often in the midst of a particularly rough patch that one would hear him laugh.  Or around the campfire, sharing stories or songs.  I will never forget that sound for the rest of my days.  He was good at reminding me not to be so serious.  On bike rides he’d ask me how I was feeling and I would answer, I don’t feel good. It was my go-to response because I was difficult.  It never failed that he would give me a squeeze and say, “You feel pretty good to me!”

He taught us it is never too late for redemption.  Papa Bill was a man who came late to Jesus.  Having avoided church for the majority of his adult life because he was afraid he’d be forced to lead the choir, he began by learning about Jesus.  Then he came to know him.  He was baptized at 86 and even in the last days of his life, he chased after the Lord, coming to Bible study as usual.  This is the most important thing – that he followed Christ.

A dear friend said to me when she heard of Papa’s passing, that she couldn’t imagine the world without him in it.  I agree as it just doesn’t seem possible.  But here we are and the world is better for having Papa in it and we are better for having known him. 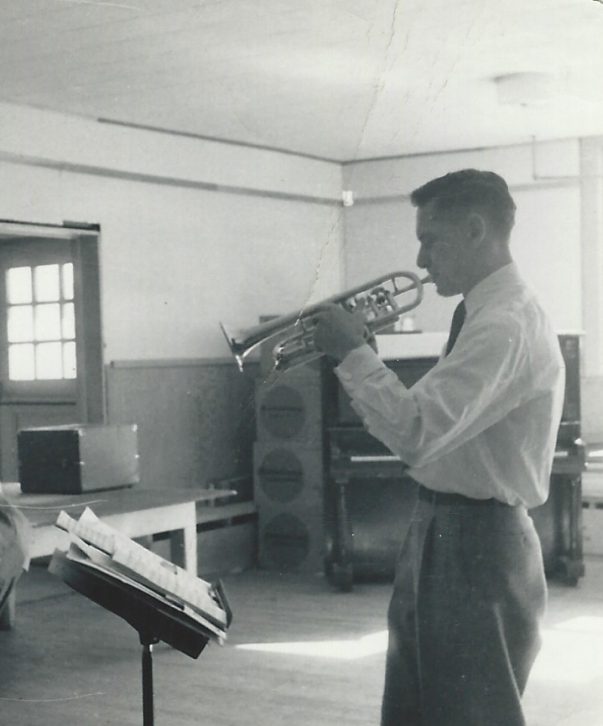