A Cup of Kindness 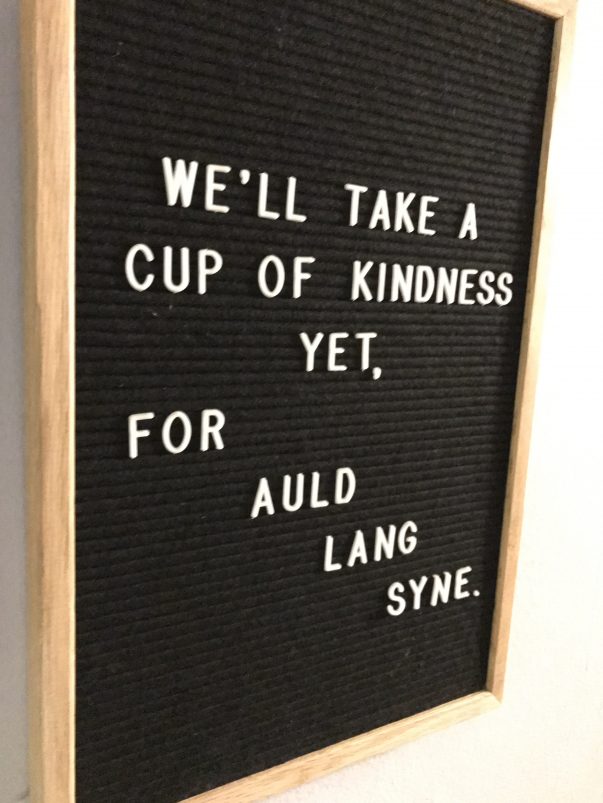 I like to plan. It’s a well known gag among ourselves and our friends that Jac and I tend to be decidedly different about the necessity of planning. (I’m bringing him around!) And our children? Yeah, they’ve learned a little too well from my example.

“So, what’s going to happen after nap?”

(If you don’t ever go to sleep and keep the baby up, you won’t live to ever find out.)

(Why do you only ask on days that I don’t have an answer and how about one thing at a time, Mr. Jammiebottoms?)

“How will I say no if someone asks me out?”

Anyway, The kids were sorely disappointed by our lack of plans for New Years Eve.

“No one is coming over?! That’s sad!” they lamented.

I assured them I had planned on plenty of sugar and probably some games and all would be well.

There were no plans for New Years but there were plans for the rest of the twelve days of Christmas, Twelfth Night, Epiphany, for schooling, for evenings in and out and I, for one, was relishing the thought of the New Year, new goals and fresh starts.

I got the text Papa had passed after the New Year was rung in and everyone was in bed. We got the first text offering condolences and help before I was out of bed the next morning.

Messages of sympathy and assurances of prayers came flooding in. We had planned to go to Mass and leave to come and load up so we could go before the weather hit but we were the last to leave the church. Friends came to give hugs and ask what they could do. Folks offered to pick things up for us. Rent a vehicle. Take our kids so we could pack. Elizabeth came and washed dishes, matched socks and folded laundry.

When we hit the road, exhausted and spread thin, friends stayed up to pray and send messages, asking for updates and making sure we stayed awake. More texts came assuring babysitters if we needed them in CA. Later we heard that at Ripon Grace, Pastor Rex asked for prayers for our safe journey. All of this prayer, from here and there and in between, held the van together and ahead of the massive storm. There was an abundance of grace in Utah and by the time we finally stumbled in to our beds in Salida, we felt loved up to the brim.

But that was just the beginning. Still the messages came. The Wyeth’s and crew provided supper at their house every night and plenty of diversions for the kids. People came into town and pitched in with whatever needed to be done. Cousin Kathy and Saboin took the girls and handled baths and hair, dressing and entertaining them before the funeral and indulged them in online shopping sprees and cartoons at the hotel after.

Over and over, love was poured out on us and I was reminded that I hadn’t planned for that. For the goodness that comes from unexpected events. For the love that makes grief a tolerable companion. For the feeling that comes with the abundance of blessing. No, it wasn’t planned but sometimes the best things aren’t.