Backstory: For months – MONTHS! – before her birthday, Gemma talked obsessively about the eye shadow we would be giving her.  I tried all the tactics to make it stop – failing to engage, ignoring, distraction – and finally just shot straight with her. “You, my friend, do not NEED eye shadow.  You are turning FOUR.  Tess can put some of her play stuff on you sometimes.”  Even this did nothing to change her mind.  And then Jackie gifted her an eye shadow palette of 100 shades. It is as  amazing as it sounds. There are strict guidelines about when and where she can wear said makeup but when she does put it on? Lord have mercy, to say she is liberal in her application is only a slight understatement.

At the end of July I had a dermatological surgery.  There were 3 incisions, multiple layers of sutures, the warning of some swelling and “perhaps a little bruising.” That turned out to be only a slight understatement, too.

The kids reacted with differing amounts of pity and concern.  Concern, mind you, not for me but for themselves.  “So how long did they say you would look like this?” Phil tried to sound nonchalant. Tess suppressed a snicker and announced, “You look like Gemma did your makeup!”

I thought perhaps Gemma would be offended or hurt but she immediately turned to me, appraised the mess of my face and said, “I think it looks beautiful.”

I’ve been MUCH more generous with the makeup rules ever since. 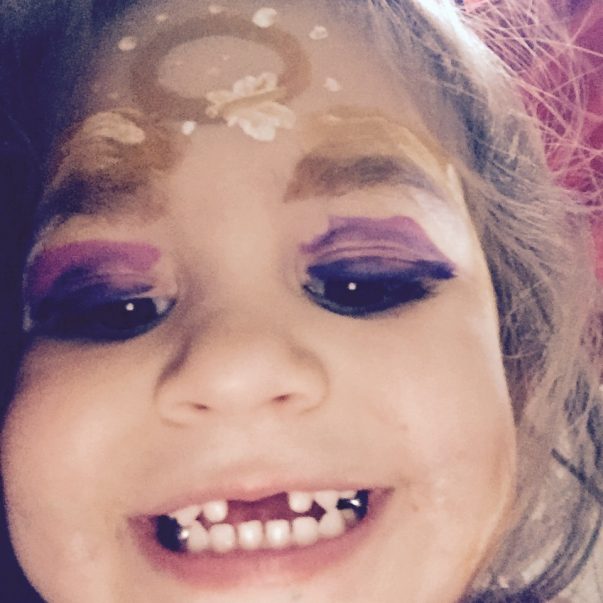