It’s what the kids kept saying to each other as we prepared for our photo shoot.

“This is exciting!”  They say it like it’s said in a kid history episode which makes it even funnier.

So, without further ado, the photo! 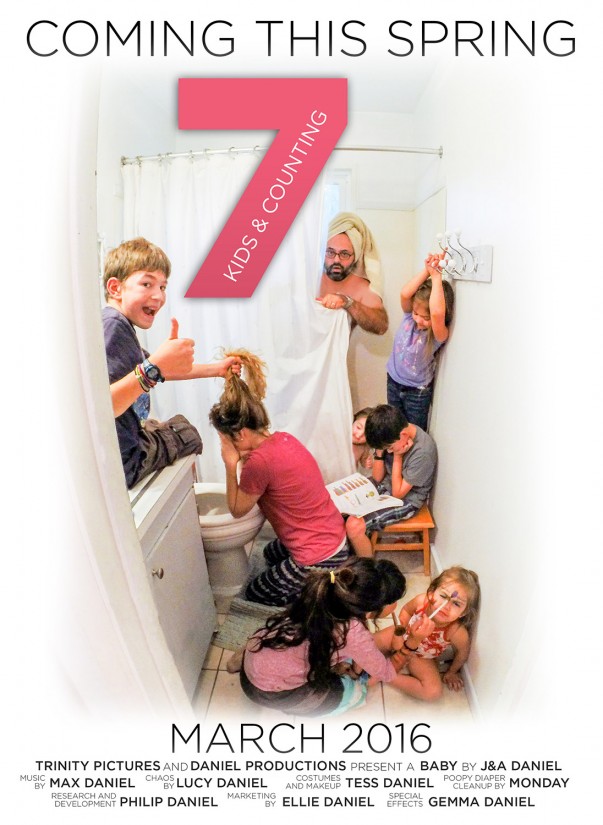 That’s right!  No one can raise 6 kids so we’re having a seventh!

So the behind the scenes:

The kids have known since the first week of August when I threw up one morning.  No one asked or acted like anything was out of the ordinary but at supper when Jac told them, there was a lot of whopping and hollering and cheering and “I knew it!” flying around.  To say they’re stoked is an understatement.

We’ve been tossing around ideas of how to mark this occasion for weeks and weeks.  But when I looked at Jac and said, “The light’s good right now in the bathroom,” he responded with, “Let’s do it, then.” “Now?!” “We’ve got a few minutes left on the pizza.  It’s go time.”  We called for the kids and quickly explained what we were doing.  In 5 minutes, the bathroom was tidied, the door removed from the hinges, props and kids in place and Jac was framing the shot.

Oh, the laughter when Jac requested someone help him with a towel on his head!

“Some people are going to be very scandalized that dad’s not wearing a shirt.”

Max was ecstatic to get to “Totally Max out!” on purpose and not be chastised for it.

We didn’t notice until Jac went in to do final edits that Lucy is copying him.

Ellie and Philip?  No acting necessary as that is them 100%.

Lu balked at everyone being in the bathroom but when I asked if she wanted to get in the tub by herself or if I should help, she mumbled something and climbed into the tub.  As confused as she might of been, she obviously had a good time!

I was feeling fine until I had my head over the toilet like that.  Ellie’s currently in charge of the bathroom and she doesn’t have the highest of standards.  “I’ll be in charge of flushing if you need it,” was Max’s generous offer.

Gemma’s face had been painted by Tess earlier in the day which was serendipitous as we had intended for her and Tess to be playing in the makeup all along.

We are calling this baby Septimus Prime or Septimus.  Jac made up two images – one with the title you see above and one with Septimus.  To my great surprise, the kids all voted for the Septimus one.  “Well,” reasoned Ellie, “We have been learning about ancient Rome and Latin and stuff so it just makes sense.”  They were sorely disappointed that it didn’t win out.

Actually, that and the fact that we’re not making an actual movie and that our friends our expecting twins and therefore will “beat” us, are their only disappointments in regard to this baby.  This kiddo doesn’t know how good it’s gonna have it.