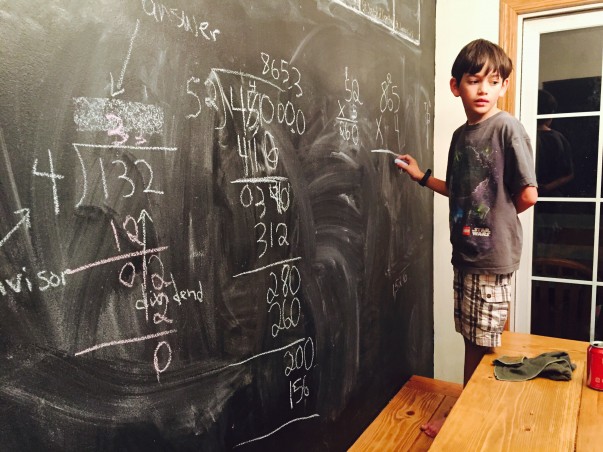 We’re experiencing a renaissance of sorts.

Math is all the rage around here.

Last night, Susan publicly chastised me for the lack of math instruction in our home.  “We were just saying how sad it is that you don’t love math.”

But the truth is, there’s been plenty of math as of late.  Algebra, geometry, a little physics. . .

This summer, we asked Max to tell us what he’d like to focus on this year.  Math was at the top of his list. “Will do!” I said and I meant it.  Here’s the thing – somewhere around sixth or seventh grade, math and I had a falling out and we never fully recovered.  I feel insecure about my math skills at best and an incompetent fool at worst.  I don’t want that for these children of mine but I’m also not going to let them flounder and convince themselves that they’re bad at math.  It doesn’t end well.

Max requested more Life of Fred.  We obliged and while Philip groaned and whined, we learned the art of long division. Things started slow and haltingly but we kept at it.

All week long, Philip has sought out his breakfast and then immediately turned to work out problems of his own devising.  Today, Max busted out his skills on his own to figure out how to divide up his timeline into equal parts.  That part in Star Wars Episode 1 where Anakin finally gets his pod racer running and he’s yelling, “It’s working!  IT’S WORKING!!” over the engine?  We’ve been feeling it this week.

Tonight Philip chuckled to himself.  “Life of Fred is right.  Doing long division is funner than using a calculator!”

It’s working indeed.  Next up, grammar.