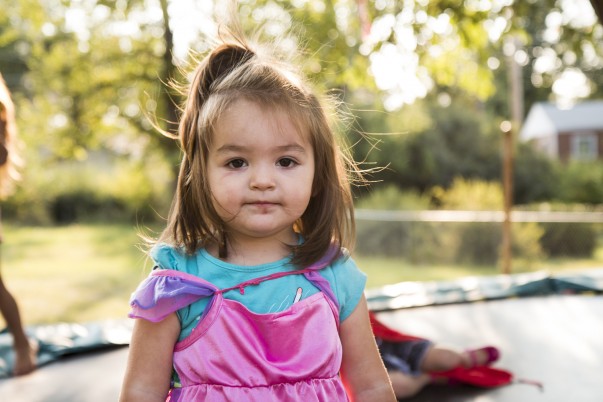 We have a month and a half until she turns two and yet . . . And yet it feels like there is a gorilla in our midst.

She can remove and put on all of her clothing.  She likes to do it herself, thankyouverymuch. Last week there was a morning that included Jac and I working together to wrestle her into a shirt, loads of kicking and tears followed by some alone time (for her) after which she emerged with said shirt on inside out and backwards.

She wore it like that the rest of the day.

She can turn on faucets and knows how to barricade herself into the bathroom.  She jumps- really, truly jumps,- on the trampoline and usually wakes up from her nap yelling “Jump!  JUMP!”  She sings “Maybe” from Annie!, the Kyrie from Mass, and our night prayer song at full volume.  She can summersalt, climb to the top of the bunk, and has found every hidden candy stash in the house.

Her temper . . . Lord, have mercy!  Her language is lagging behind her desire to communicate and certainly her opinion and the frustration erupts out of her in thrown plates, fierce frowns, full blown fits and biting.  Oh, the biting!

But the thing that strikes fear into my heart?  She’s learned to climb out of her crib.  But that’s the only place she deems appropriate for sleeping and so there is a problem.  And many tears.  Mostly on her part but some on mine.

Please, God, let this mean potty training will be easy!