Just over a year ago, Jac began looking into a uniformed, Catholic youth movement for Tess.  We didn’t want to hitch our wagons to the cookie sellers and our girl was itching for badges to earn so we were motivated. When we found the Federation of North American Explorers and their roots that reached back to Lord Baden Powell through a Fr. Jacques  who had connections to St. Therese . . . Well, it just made sense.

We began to pray for 5 other girls Tess’s age that would make us official.  We filled out paperwork, learned the lingo, made the neckers, hosted info nights and waited. Before we knew what was happening, we had 14 little girls, 5 big girls and were in the possession of a good deal of camping gear.

The camping gear was a blessing because girls would invite their friends and they’d learn some knots and at the end of the night announce they’d join, “But when are we going camping?”

I’ll admit, I was taken aback.  I can’t remember ever being excited to camp.  Maybe it’s because we did it -OFTEN- growing up. By the time Billy and I were 6 and 8, it was our job to pitch the family tent and arrange the bedding when we dune buggied or traveled to SD.  Did I like being in the dune buggies?  Yes, as long as I could breathe.  Did I like hanging with my friends in the wild? Absolutely.  Did I enjoy raucous campfires and having everyone under one roof?  Of course!  But did I like pooping in the woods or the dirt everywhere or the cold mornings or the work before, during and after?

But these girls were giddy at the prospect.  So, we planned a maiden voyage to the lake.  We prayed things would dry out because it was a swamp and the wettest May/June on record and camping in the rain is even harder than plain camping.  (I was going to say “worse” or “crappier” but a Timber Wolf is always happy!) We loaded up the girls and the cars and set off in high spirits.

Minutes away from Spearfish and Mass, we blew a tire at 80 mph. It peeled back the metal of the wheel well and broke a coolant line.  Because we were working on Being Prepared, we had a new spare and the Witte’s were able to fill our resevoir and patch the line. 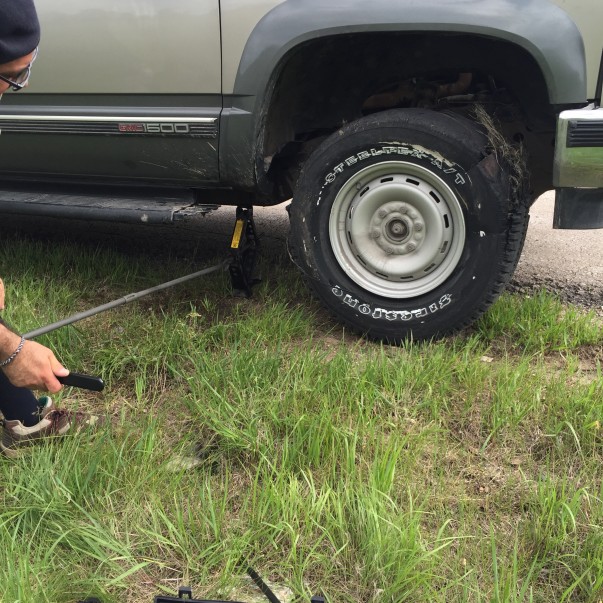 We got to the lake as dark descended.  Elizabeth and the girls struggled with the tents they had effortlessly erected days before.  I began to panic when, after an hour of trying, I could not get a fire lit.  The organization encourages all meals to be prepared over an open fire, so I was looking down the barrel of hunger and desperation while our neighbors poured gasoline on their woodpile and exclaimed over their flames. 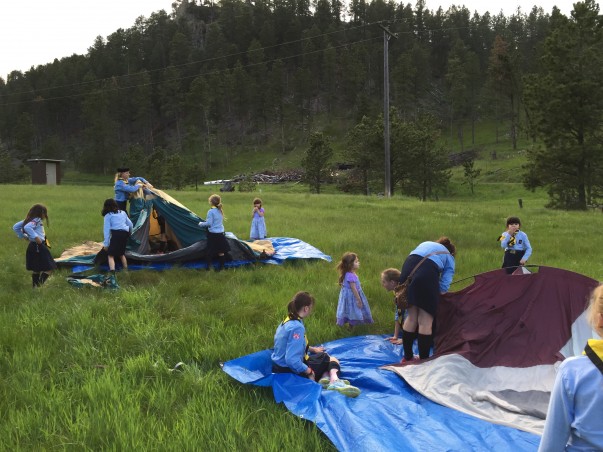 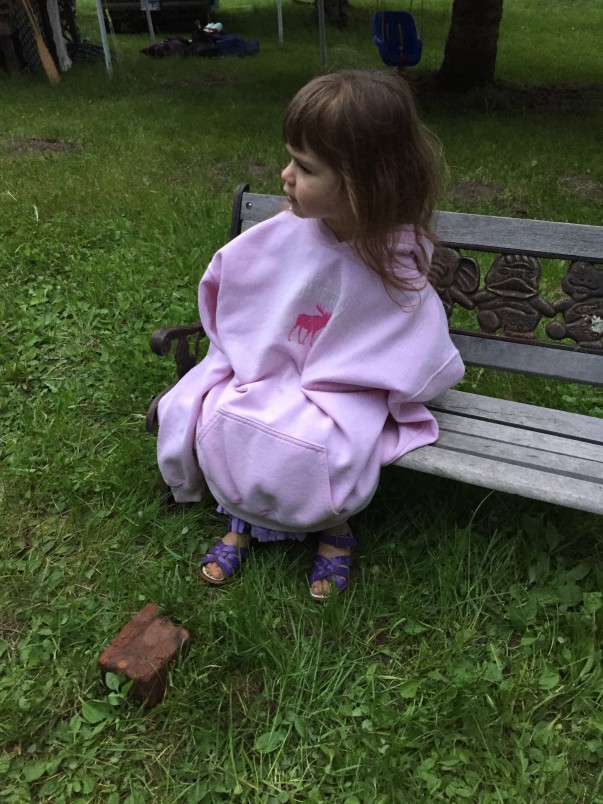 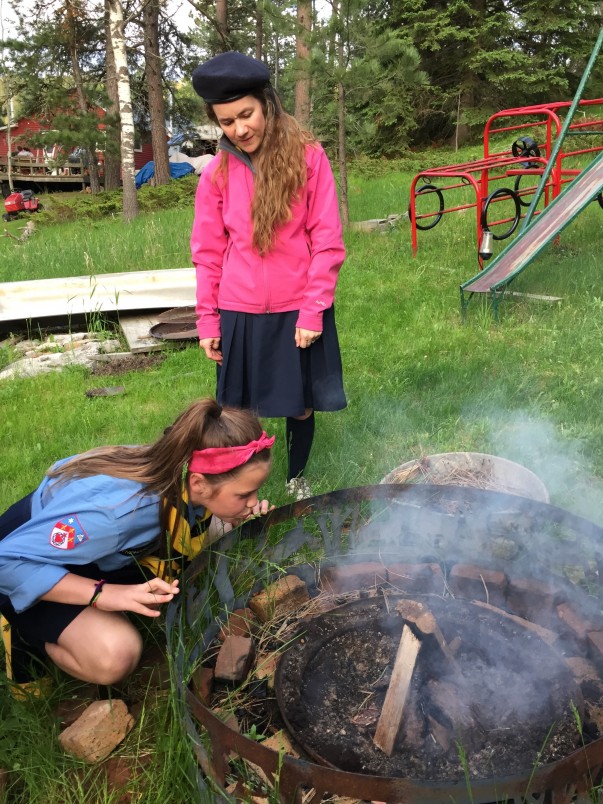 We ate our burned weenies in the dark. (“Wait . . . are weenies the same as hotdogs?” “My favorite part was the hotdogs.  Even though they were burned and the biscuit was doughy, it was still REALLY good.”) We hustled through an abbreviated dessert and campfire. (Upon being instructed with marshmallows and chocolate and tortillas -“Oh! They’re Sm’acos!” “My favorite part was singing at campfire.”)  I lined them up and showed them how to brush their teeth from a cup and spit in the weeds. 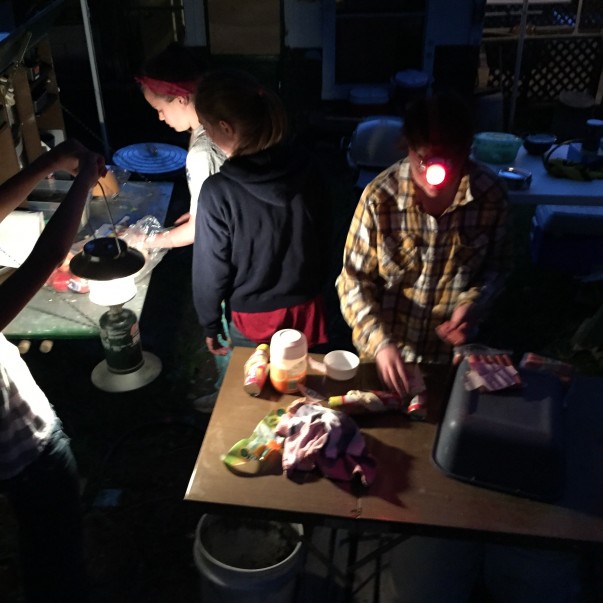 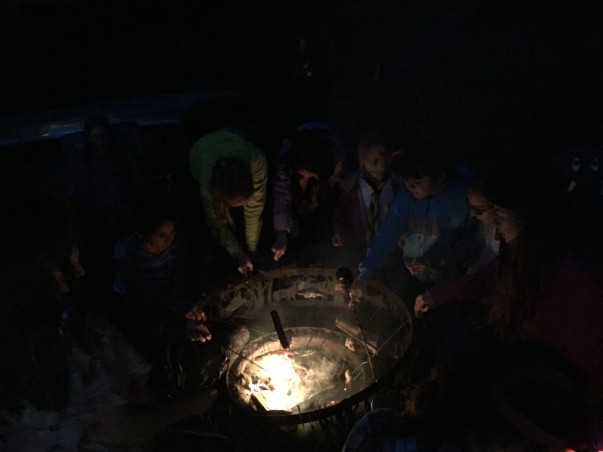 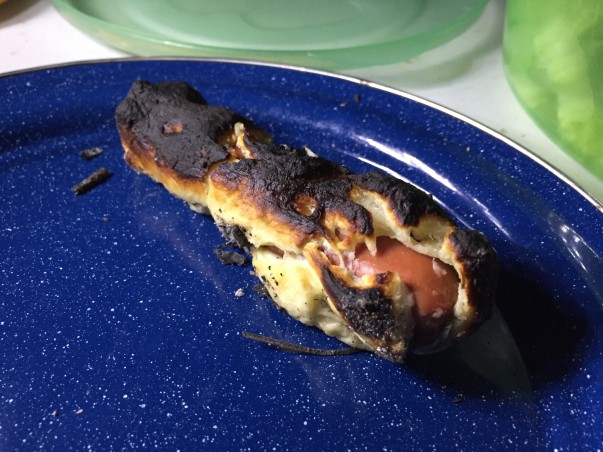 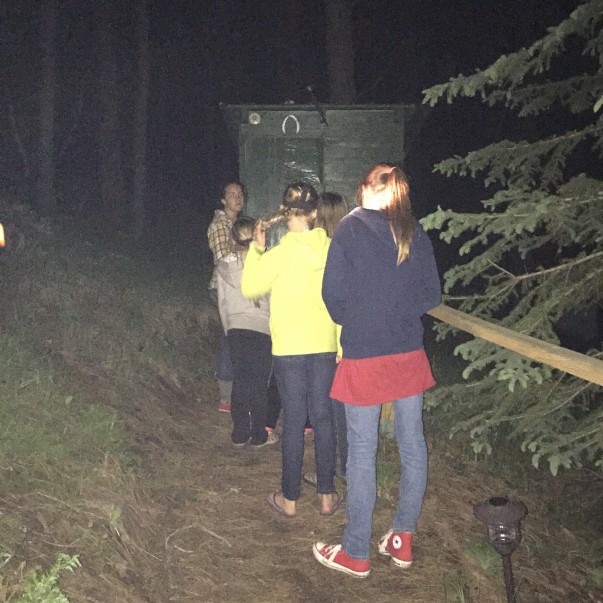 At midnight I crawled into the tent to sleep on my hump of meadow between the bags and shoes.

At 3 am the thunder and lightening woke me.  I laid still, not wanting to disturb the condensation I could see with each flash.  Drips began to fall on my face.  The thunder was so continuous that even though I yelled, “Girls!  Are you okay?” no one could hear me.  Thirty minutes in, there was a sliver of a break.  This time, we heard Elizabeth leading the big girls in a giggly version of ‘Singing in the Rain.’  “That’s it!  They can NOT have more fun than us!”  When they heard that, the separating flaps all unzipped and they all began to talk at once.  Then they discovered EVERYTHING was wet.  They were cold.  It was scary.  They should’ve cried and I wouldn’t have faulted them – I would’ve joined in!

Instead, we rearranged.  We pulled out extra sweatshirts and covered pillows with towels.  They piled around me like puppies and we sang and played games and in the end, because God loves me, I had a book of fairy tales downloaded on my phone.  I read to them over the rain and the thunder and we slept a couple more hours. 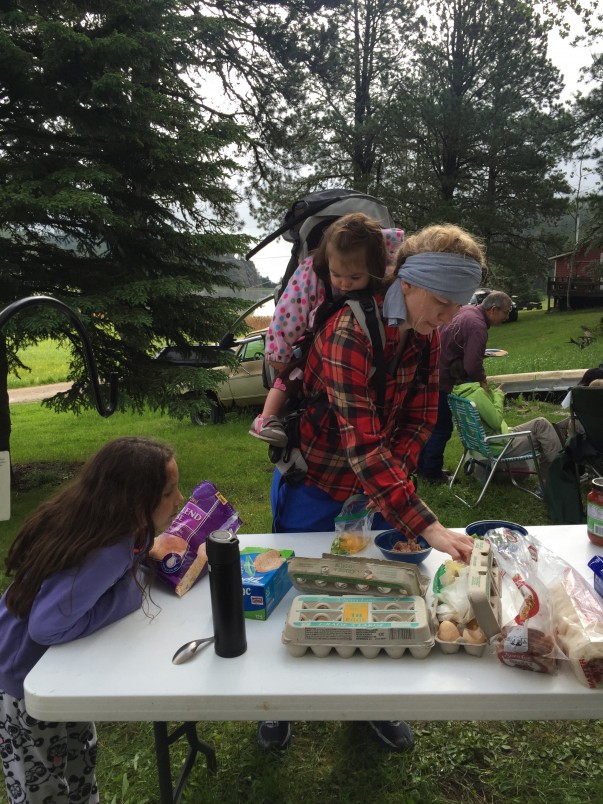 We woke to fog so thick we couldn’t see the lake.  It was wet and cold STILL but no one complained. When the sun broke out as we made breakfast, they all rushed to put on their swim suits.  Who cared if it was only 60 degrees?  Elizabeth led the charge to brush their teeth with charcoal and after a collective “Crunch!” in the breathless silence, there was so much laughing and spitting black I can’t help but giggle now. 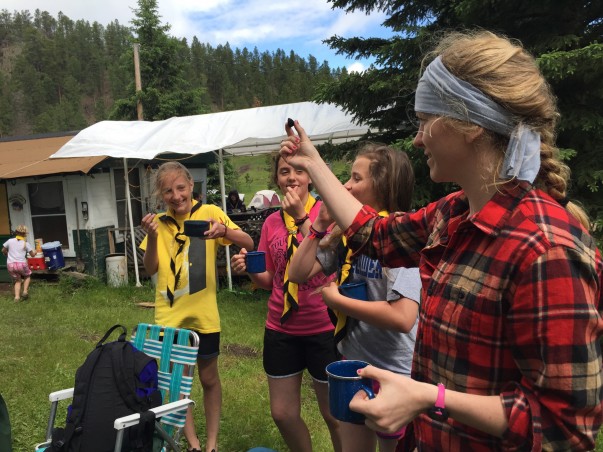 They played so hard and got so many sunburns and ‘squito bites that at our late lunch, there was silence.  “This is SO good.  I think I was hungry!” Most of them slept on the return trip  but when they woke up, wanted to know when we would go again. 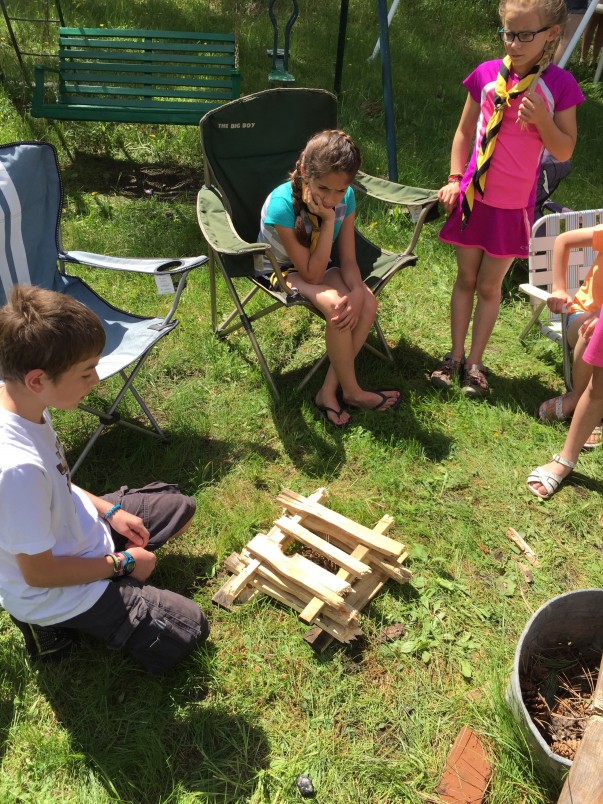 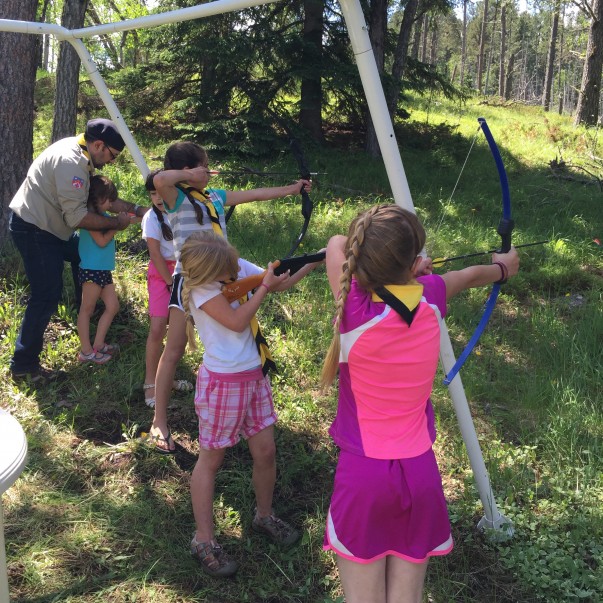 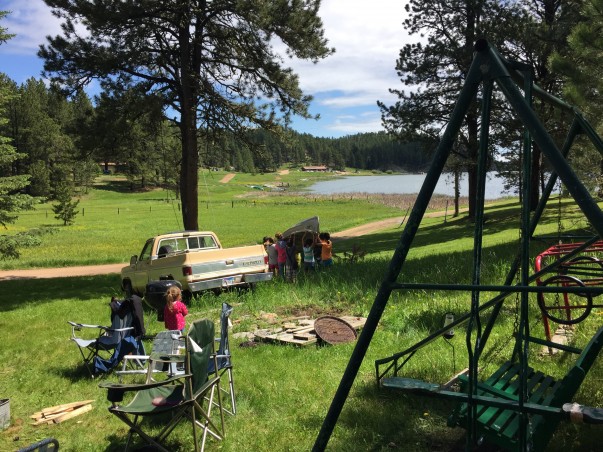 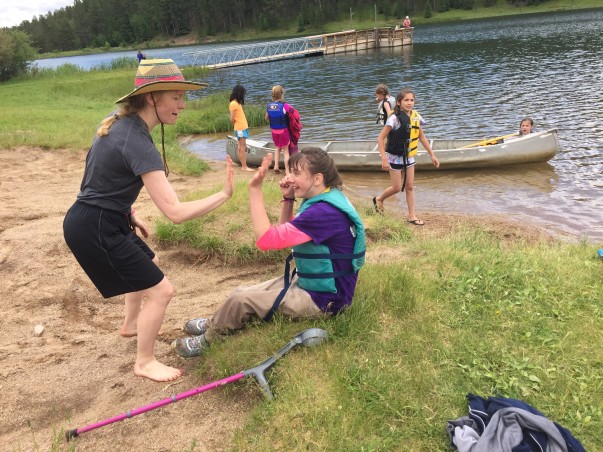 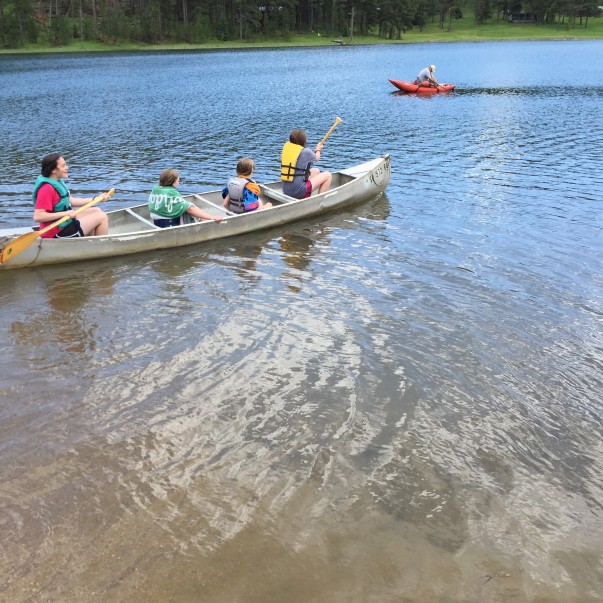 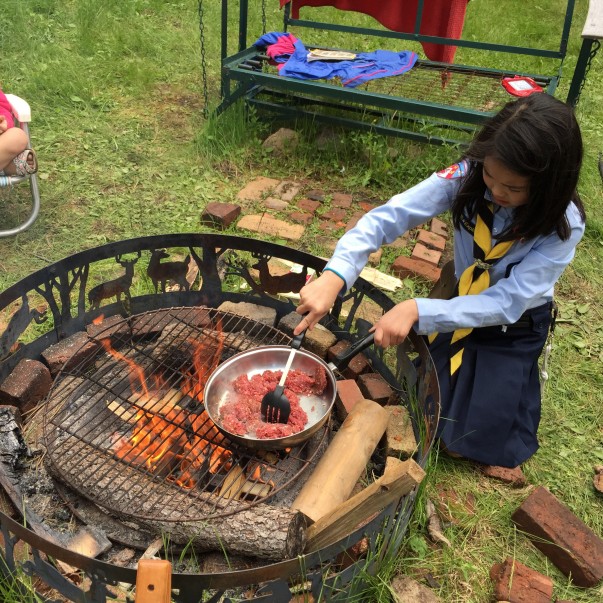 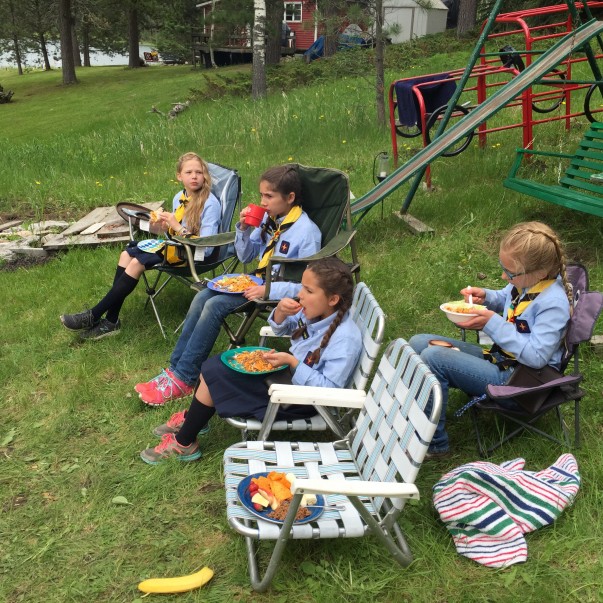 And wouldn’t you know?  I’m actually looking forward to it, too.