Tess and Ellie, laughing riotously, ran down the hall on Sunday.

Their faces bore elaborate mustaches and goatees, all penned with colorful Crayola markers.

I don’t know what compelled them and I can’t begin to guess.  At any rate, we chuckled nervously and advised them that removal of said facial adornments was probably best sooner rather than later. Thankfully, they took the advise but not before trying some rainbow themed ‘staches.

I shouldn’t have been surprised then, I really shouldn’t, when Gemma turned around from her “coloring” this afternoon with a kaleidoscopic face.  Her siblings hooted and chastised and her pride melted into tears.  I assured her that she was fine, though I wasn’t a huge fan of the activity in general. 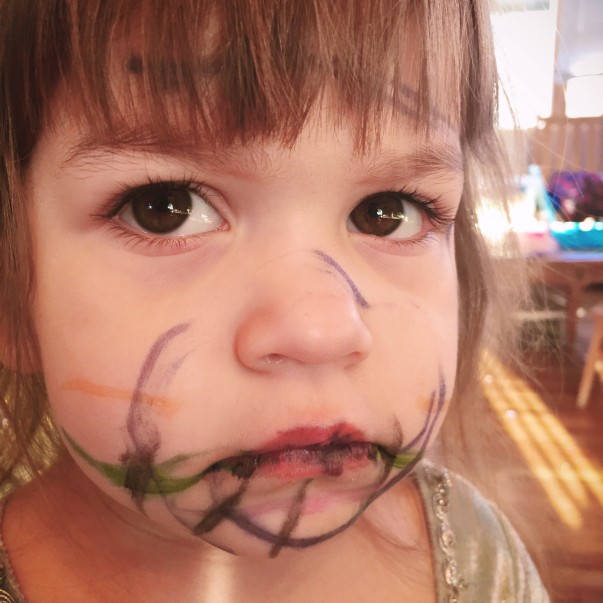 A short time later I found her busy in the bathroom with sodden toilet paper piled around her.  She took care of things though I will say she was greatly aided by a real wash-cloth.

Again with the surprise tonight when she took a ball point pen to her doll’s face.  The other events her siblings found laughable but the doll was a serious offense.  Wipes, soap, Norwex- they fades the marks but I’m sure they’re now tattoos.  And Gemma?  Well, I think she finds them an improvement.

Fingers crossed she got it out of her system but I’m rounding up the Sharpies just in case.