All Dressed in White

Last spring it dawned on us that the kids hadn’t been to a wedding in a really long time.  Here we are, photographing weddings, scheming weddings (young adults, I’M LOOKING AT YOU), writing marriage prep retreats and yet our kids can’t remember having attended a Catholic wedding.

Tess and Ellie speculated about what happens during the sacrament and how.  The tended to speak in weeping generalizations and asked if Father was the one who told people what to wear. It was troubling.

Then, Andy and Ceci booked us for the wedding.  Much to his delight, they asked Max to serve.  “We have someone else to do the reception, so we’d like you to just come and enjoy it since you probably don’t get to do that very often. We’d like the whole family to be there!” They said it at the table in front of everyone and there was so much excitement that we said yes on the spot.  How we would manage it thought was another matter.

Then Chelsey and Allie were coming!  I asked the mother of the groom if we could add a couple of guests.  “Of course!” Was the reply.  “The more the merrier!”

And so our girls were on countdown.  Come December “Andy and Ceci’s WEDDING!” made the top 5 list of things they talked about.  Seeing the Hanson family at Christmas Mass and visiting with the siblings added fresh fuel to the fire.  It was Max who announced excitedly that the groom’s siblings had said his Christmas outfit was “perfect” for the weddings “Because they said Ceci chose poinsettia red.  So I’m going to wear this to the wedding.  I’m so glad I match.” he ended with a relieved sigh.

We’ve done a lot of weddings and have seen a lot of things.  But this one was special.  Yes, it was beautiful and of course the family was fun, (I speak of them like they’re strangers – they’re dear, dear friends and a huge blessing to us) but there was something else.  The stress level was low and everyone enjoyed each other but at the heart was a bride and a groom who appreciated the sanctity of their vows and took great joy, not just in each other, but in the generations before them that made it all possible.  They were delighted to be uniting finally and were so happy to have everyone there.

I’m not doing it justice.  It was amazing.

I wish I could’ve watched our girls take it in.  It was a bitter cold day and getting this herd of cats dressed and into a car was tricky.  They arrived after the procession in and Chelsey said Tess was concerned they’d missed the vows and she didn’t want that.  Afterwards, we waited to greet the bride and groom and their parent’s.  Jumbled up with the Hofers, Langs and Kinyons, the kids drifted back and forth.  Gemma found me and pulling on my skirts, asked to see Mary.  “Okay,” I said, “She’s right there.” and I directed her towards Mary Kinyon, a babysitter.  “No!”  Gemma frowned.  “I want to go see Mary in the white dress and ‘bail’.”

Now, cut this Catholic mom some slack.  I have a daughter that wears a chapel veil to every Mass we attend.  We talk about sisters veils.  A Mary in a veil must obviously mean a statue of Our Lady, right?  I racked my brain where Gem might have seen a statue of our Lady of Lourdes. “I don’t know what you’re talking about.” I told her and went back to visiting.

But Gemma was persistent.  By the time Jac and I made it to the reception, she was wandering free, sucking on honey sticks and lingering by the drink stations.  She kept asking for Mary though, all through dinner, the toasts and the first dances.  When the dance had started in earnest, we took to the floor with her but she wouldn’t stop asking for Mary so we kept pawning her off on Mary Kinyon.  Time and again, Gem found her way back.  Finally, she sat on my lap.

“Mama,” she stared earnestly into my eyes, “I want to dance with Mary in the white dress and ‘bail.'” “I know, lovey, but I don’t know who you mean.  Mary can’t dance with you.” “Yes, she can.”  she insisted.  “Okay, then go find her.” “She’s right there, mama.  Right there’s Joseph and Mary.” She pointed over my shoulder and I turned to see the bride and groom, beaming and lovely, visiting with guests.

Gemma was visibly relieved when I finally got it.

I relayed the story to Jac and then to Chelsey and Allie who said she had spent the morning asking for Mary in the white dress and ‘bail.’ Jac held her hand and took her to see Ceci and Andy.  This mama’s heart welled right up to see them bend down to speak to her and take her in.

She refused to go with them to the dance floor.

Before long, though, she was asking to dance with Mary so we found Ceci and she and her Groom made Gemma’s night.

As we made our exit, the bride’s parent’s caught us to thank us.  We thanked them in return for a great day and congratulated them on a beautiful daughter and a catch in their new son in law.  They brought up the kids and paid compliments but when we related the story, laughing, of Gemma and Mary and Joseph, the bride’s mom teared up.

“Oh, thank you for telling us! You don’t understand.  This afternoon the boys prayed in their room.  Marcus [her son] prayed that they would always reflect the love of the Holy Family and, your little girl saw it!”

Andy and Ceci, thank you for the invitation and witness of love.  Praying for many years full of God’s blessings and a love that is like St. Joseph and Mary’s . 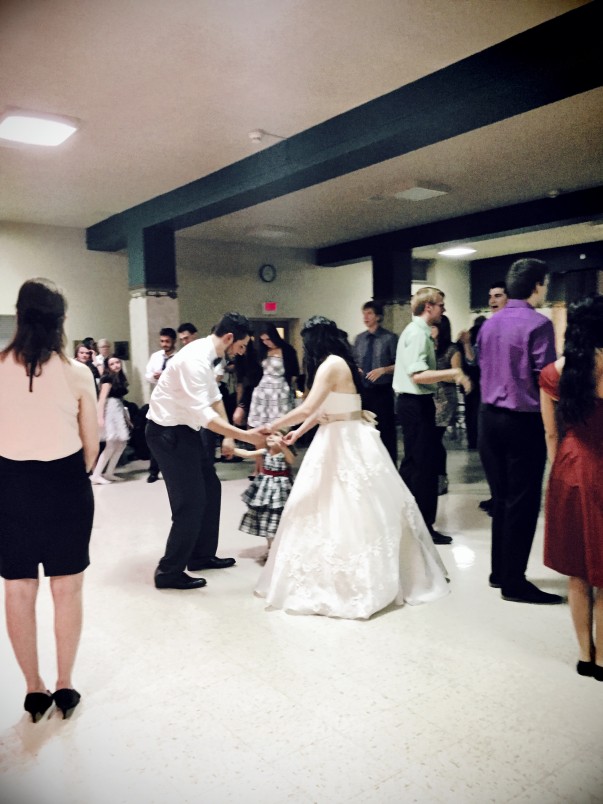