It’s cold here.  Like freeze your snot cold.  It snowed Monday and our sidewalk has yet to be shoveled because the subzero temps make it hard to breathe and are a danger to your skin.  And after 4 housebound days the crew has caught a nasty case of cabin fever.

It makes me pine for warmer days and better times.  Oh, take me back . . .

Sometime in the spring I ran across an ad on Facebook (yes I did.  Ain’t no shame.) hawking Rapid Pursuit, an urban adventure race.  It said it was a team competition, family friendly, and could be done running, on bikes or meandering.  It had me at meandering!  There was also mention of challenges that required wit.  What was not to love?!

I sent out a jovial message to the college ladies along the lines of “Wouldn’t this be fun?!” wink, wink, nudge, nudge, chortle, chortle.

Let me tell you, I was NOT chortling when Lace called my bluff and wanted to know who was in.  Maybe no one else was available . . . But then Chrisa was available and so was Lace and I had no real excuse so I had to say yes.  HAD to.  Then Chrisa went and registered us and it was official.

I started to sweat about 4 days before the race. My nightmares were haunting.  I’m not exaggerating – I dreamed that one of the challenges required us to hit a baseball and we couldn’t move on until we did.  I woke up with my heart racing and wishing I had actually tried in middle school P.E..

The morning of the race, I was sick to my stomach. Problem was, so was Lu.  She puked and puked and puked some more.  There was choking and dry heaves and all sorts of suffering.

Lacey and Chrisa said it wasn’t a big deal and to worry about my baby.  Jac thought she’d be fine but he wasn’t around.  In the end I asked our sitter (the rest of the crew was at the lake) what she thought.  She watched Lu toss her cookies, shrugged her shoulders and cuddled Lu to her.  “We’ll be fine, right Lucy?  You go do your thing and get lots of ideas for Totus Tuus.  You deserve this!”  I was torn but I also knew that Rose’s dad is a doctor and if anything was off, she was in good hands at their house.

We gathered in Main Street Square with plaid shirts, bandanas and straw hats to fit our Dakota Girls team name.  But the lean bodies with their gps watches and such were all sorts of intimidating.  What had we done?! 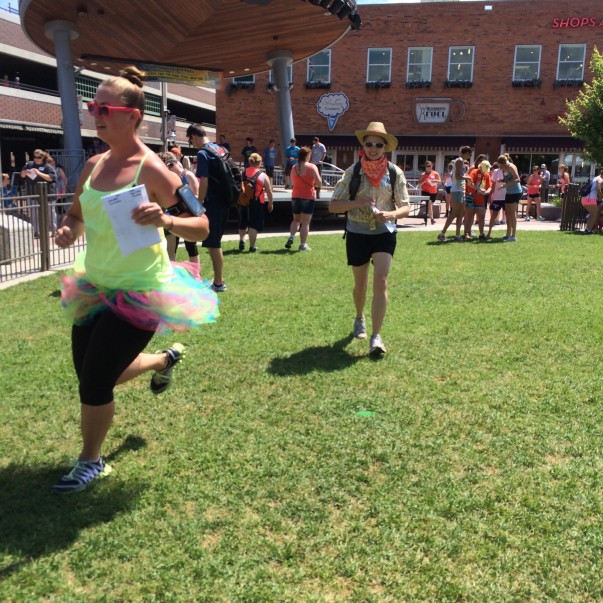 Lace was our team captain and received our packet with map, blindfold and clues.  Team after team ran out of the square while we worked through the clues, hoping our minds would help us out.  Then we were off.

About a block in, I wondered if I would make it out alive.  I didn’t want to be the weak link but it wasn’t looking good!

We pulled a sled.  We used a punching bag (AFTER we ripped off 15 push ups but before I humiliated myself by being unable to complete a single sit up, let alone 15.). There was a boat to row around a fountain whilst blindfolded.  We had to fish out rubber duckies and thanked the Lord that Chrisa the math teacher was on our team to add up the duck numbers to get the total we needed. 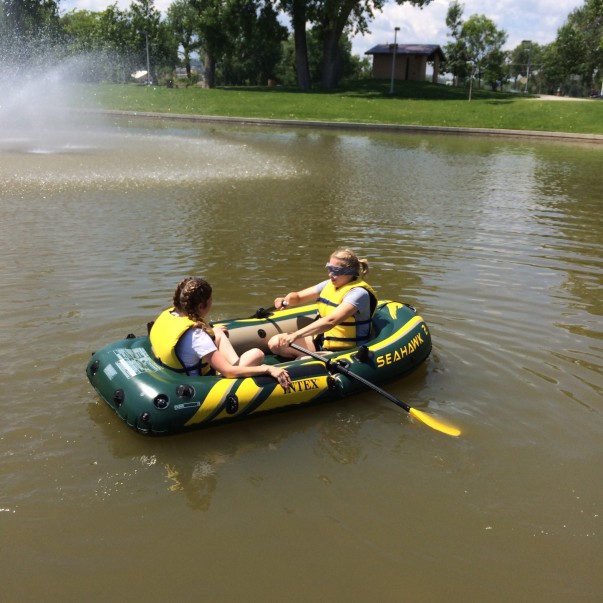 Then there was a “secret” challenge.  Everyone gathered about very excited like.  There was an assortment of condiments and a stack of cards.  Pull a card, they said, and eat whatever was on it.

Lace pulled a cricket and I got a silk worm. “Try the ranch!” the lady said.  “NOTHING will make this better.” I informed her. 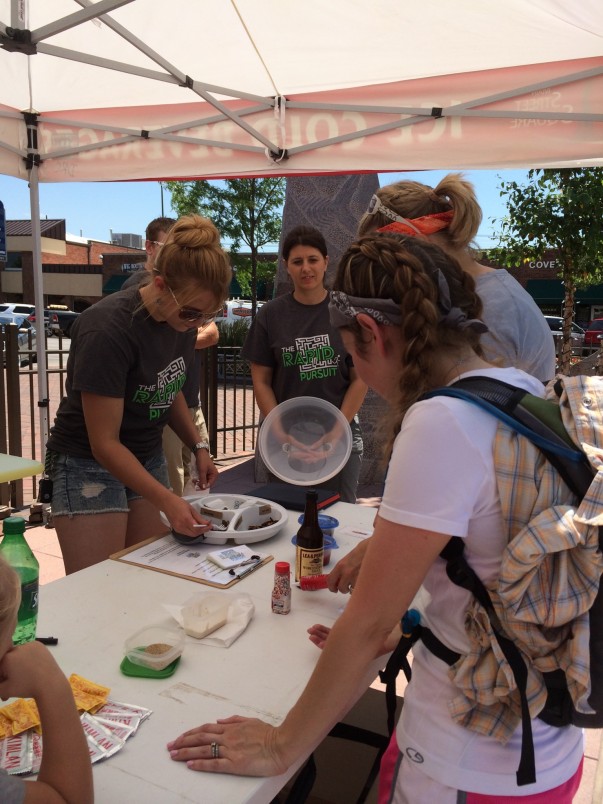 In the end, I opted for chocolate frosting and tried to swallow it as whole as possible.  I only picked worm bits from my teach for a little while . . .

The day was full of fun and laughter.  We had a ball shocking the volunteers who ran the Quarters and Beer Pong stations.  How could we have gone to college and not ever played these games?! Turns out Chrisa is very talented at Quarters. I trusted the girls to lead me blindfolded thru a minefield of dog poo. It wasn’t until I was through that it was revealed that it was chocolate pudding. 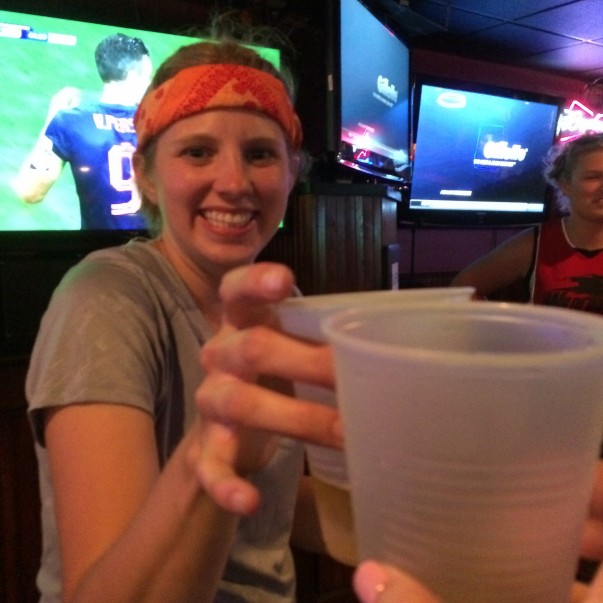 And then came the basketball.  Make one basket with a water balloon shot from a sling shot.  10 tries but if we didn’t make it, each of us would have to make a basket.

We didn’t make it with the balloons.

And I made shot after shot after shot.  I think I cried and if my face hadn’t been sunburned and red from effort, everyone would’ve seen how mightily I blushed.  My nightmare was coming true.

In the end, the volunteers let us go because they felt sorry for me and my suffering team.  That and we had barely any time to make it back to the starting point.

We ran until I couldn’t any more then we’d walk.  Then we’d run again.  We laughed and encouraged each other and dodged in and out of traffic.

I couldn’t do it.  We showed up in the square 30 seconds too late.  It was embarrassing and heartbreaking.  I cried then for sure.  I didn’t want to let the girls down but I had.

But those sisters of mine?  They hugged me and prayed over me and reminded me that I had had a baby 9 months earlier which was amazing. They really are the best kind of friends.  We laughed some more and divided our chips and vowed that, barring pregnancies or babies, we’d be back again in 2015.  We’d train a little perhaps because 10 miles unprepared is pretty brutal. 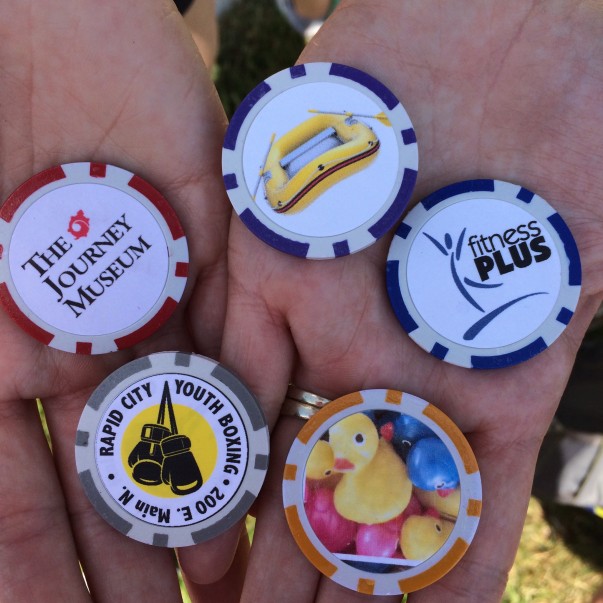 And Lu? She fell asleep shortly after I left her, slept well and ate a large lunch, none the worse for wear.

Rapid Pursuit, it was real fun.  Hope to see you again but let’s leave the edible bugs at home, hmmm?  And I’ll work on my free throw.  And frisbee toss.  And my baseball skills just to be safe. 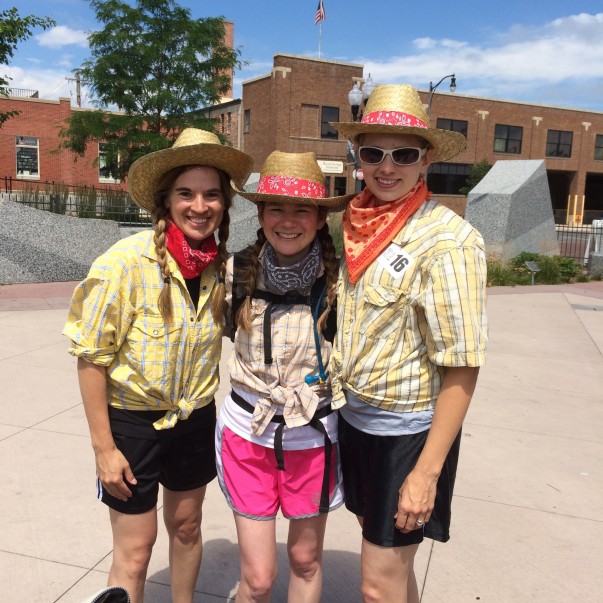