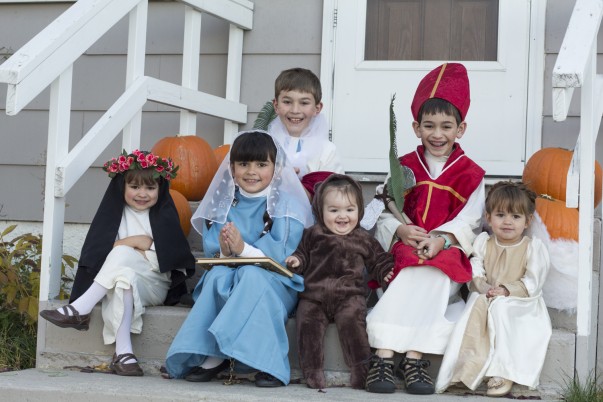 Discussions of this year’s Saints really did start very early and without any prompting from Jac or I.  Even the discussion and weighing of pros and cons for their selections was largely relegated to the congregation of siblings.  We eavesdropped and let them iron things out.  They’ve even gotten to the point where the older ones researched on their own in our stash of Saint books and developed their own vision for the look of the costume.  Sure, it was a little bitter sweet seeing them set off without needing me but it was also pretty great. 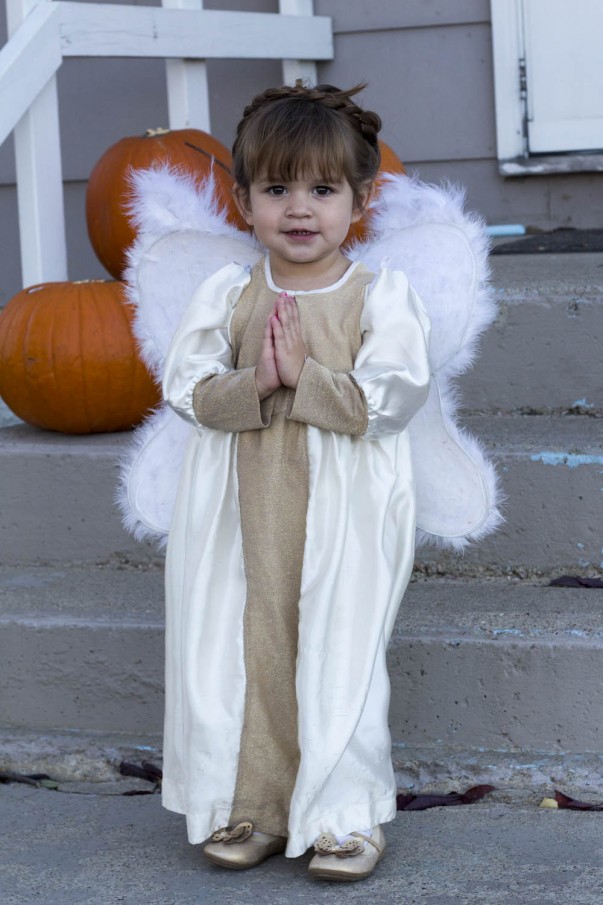 Gemma, as reported earlier, was an Angel.  I took a dress I made for Tess when she turned 5 and cut it down, removing paint stains and resewing where seams had torn.  Putting it on, Gemma donned an air of grace.  The same cannot be said for her wings.  Jac found them the evening we visited the Greet and Treat causing to Gemma clunk down the hall, stopping in the doorway, head and eyes down.  She heaved a sigh. “Welp, I’m not going to heaven.” she announced with defeat. “What? Why not?” I asked.  She looked offended at my stupidity. “Psh!  These wings!  They don’t work!”  She tossed her arms and stomped away.  It took much coaxing on everyone’s part to convince her that they were okay. 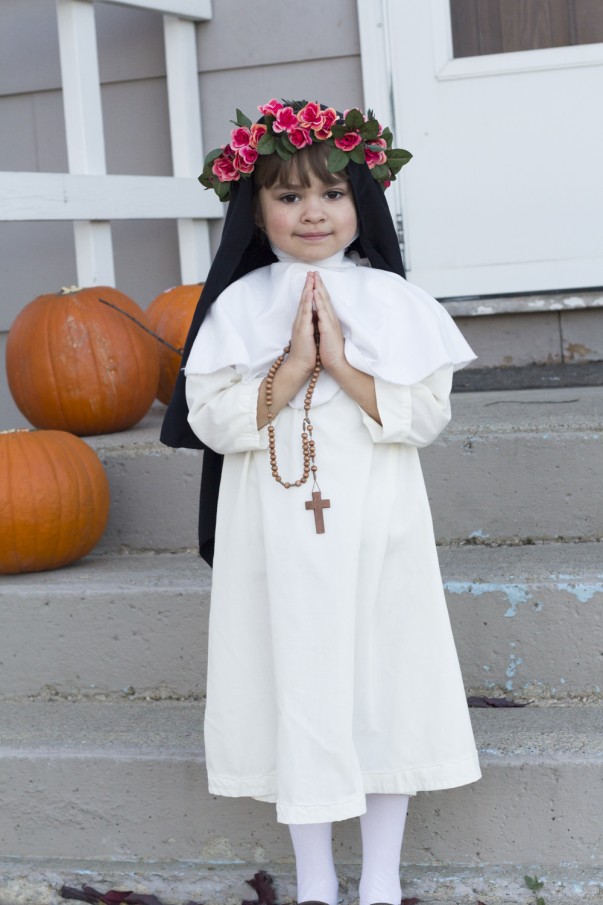 Ellie decided during the summer that she was going to be Rose of Lima and she never wavered.  The first cannonized American Saint, St. Rose is said to have worn a crown of thorns that she hid under a wreath of roses.  Was Ellie ever disappointed when we informed her that her crown would JUST be roses and fake ones at that.  Someday I will figure out how to make a real coif, bandeau and guimpe for a nun’s habit but thankfully, this year was not that year.  She was able to wear the coif and veil Tess used last year and the habit of a Dominican from years past, though it was a leeeettle short.  Poverty, I say!  She was lovely though rather offended that everyone mistook her for St. Therese (Tess’s saint!  How dare they!). 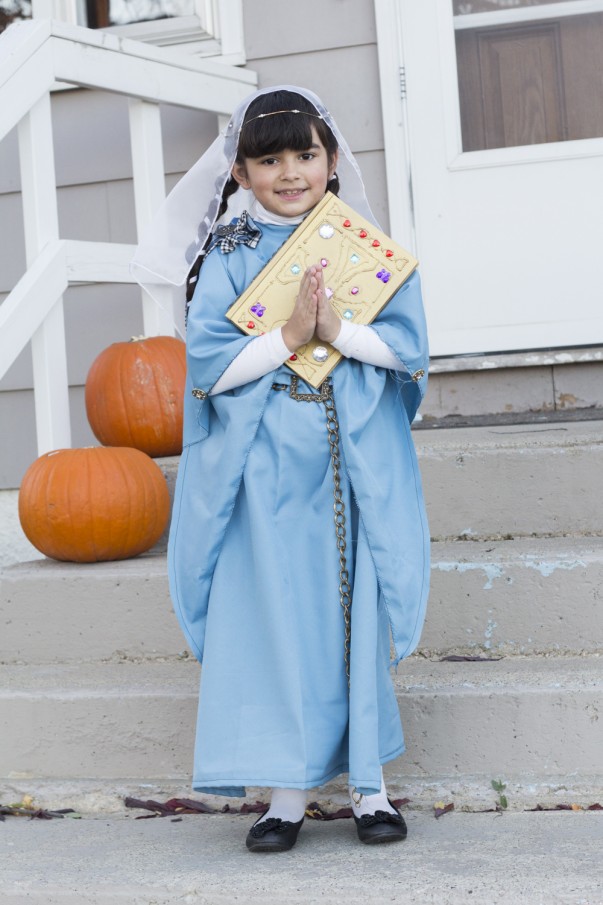 Tess went back and forth about wanting to be Mary Queen of Heaven or St. Margaret of Scotland.  In the end, I think she choose St. Margaret in the hopes of stumping the homeschoolers at the All Saints Day party.  And stump she did.  She found a lovely image of St. Margaret in blue with her black hair in heavy, wrapped braids.  It was Tess through and through.  I set out to the Salvation Army thrift store in the hopes of finding a workable sheet and instead found a shower curtain in the perfect color.  She found a chain belt in the dress up, and we used my clan Lindsay tartan scarf and a brooch from the B.F.F. We spray painted a $.25 book gold and then Tess decorated it with jewels.  St. Margaret married a good but pagan king and finally won him over to the Gospel with her gentle spirit and kindness to everyone.  He couldn’t read but she could so he had all of her books covered in gold and encrusted with gems out of love for her.  Awwww! 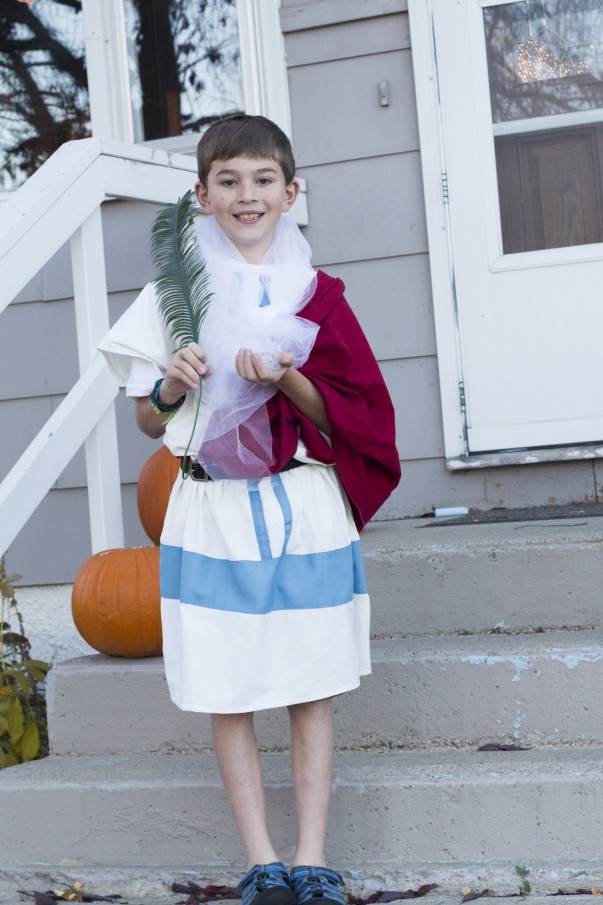 Max was very stoic in the planning process. He was undecided about St. Peter of St. Paul and then he went to the youth rally.  Randy must’ve done a bang-up job telling the story of St. Tarcisius because we got in the car at the end of the day and Max declared that to be his choice for All Saints. He found a white tunic in the dress up and he sewed a blue band on the bottom as seen in the holy cards for Tarcisius.  He found some red fabric and we bought a palm frond, both traditional symbols for a martyr.  Then he strung a pyx – a round box in which to carry the consecrated host to a person for communion – that Philip owns on a string to wear around his neck.  St. Tarcisius was only 12 when he set out to take communion to the Christians awaiting exocution in the Colosseum. His playmates wanted to see ‘the great mystery’ and when he refused, they ‘set upon him like rabid dogs.’  He died under their blows and kicks but protected the body of Our Lord through it all.  Max was much impressed. 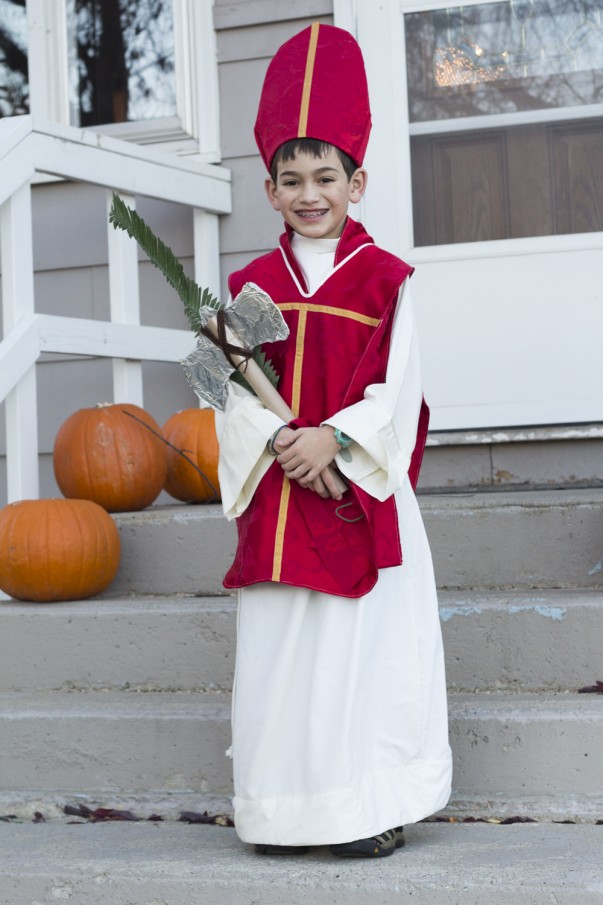 Philip made up his mind rather quickly to be St. Valentine.  I wish I had started on the costume as quickly . . . He needed red vestments because he was a bishop and a martyr.  I found a great table cloth at Salvation Army only to bring it home and decide that it fit our long table and so, for a $1.25, was too valuable to cut up.  Instead, I cut the table cloth we already had even though it was a poinsettia brocade.  Philip requested a fiddle-back chasuble, the old style priestly vestment.  And a stole.  Oh and a miter, of course!  About the time I was burning my finger while hot gluing the miter, I wondered why we couldn’t just buy Power Ranger costumes.  Whose idea was this anyway?!  Then Philip put on said miter, or attempted to put it on.  I shoved it down onto his brow.  “It’s totally fine!” he nodded vigorously.  “It’s not uncomfortable at all!  It’s not too tight!”  Riiiiight.  He used the Celtic double headed axe we had made for school and a purchased palm frond for the symbols of his martyrdom and looked amazing. 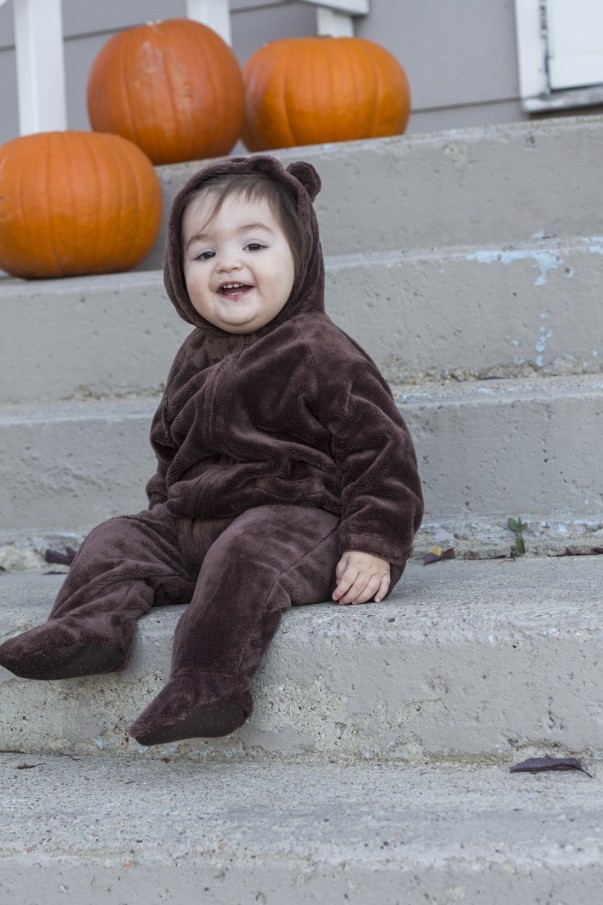 And Lu.  Lucy was the cutest little bear because we had the outfit from when Max was a baby and it fit her so we used it.  I should have painted her nose, but I didn’t.  We zipped her up and when her siblings laughed and cheered over her ears, she smiled and yelled in pleasure.  I thought she looked just like one of the lost boys from Peter Pan. 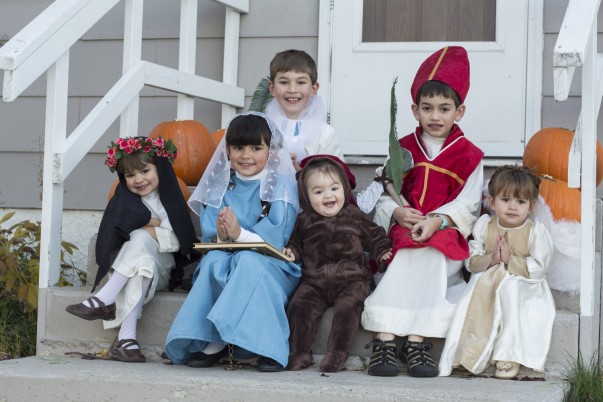 And that’s the round up. It is a lot of work but this year they wore their costumes on 4 separate occasions and, as we’ve seen, someone usually wears them or parts of them, again. They’re already tossing around ideas for next year. All you holy men and women, pray for us!