This may come as a surprise, but I’m not a huge fan of facial hair. But Jac can rock a sweet beard so he does and I’m okay with that.  Given the choice, however, I prefer a clean shave.

“Daddy” to her means a nice full beard that she can pull on or “soft” (that’s kid for caress) whenever she likes (often in her sleep when she’s stretched out between us). At the end of the summer Jac shaved one day while she and I were out running errands.  When he came out to unload the car, she cried.

Tonight Jac shaved again (probably the first time since the crying episode) and came out to the table with his collar pulled over his nose.  We watched in anticipation of the “big reveal.”

She looked around at each of us and laughed.  She pointed at Jac and smiled.  “Da!”

Then the shirt was pulled down and we held our breaths.  Lu’s smile melted – I can say I have never seen a person’s face fall until tonight. She checked her sibling’s reactions and tried not to cry.  Jac tried to get her to touch his face and she pulled back, none to pleased at his assumption that she wanted him that close.

It took 20 minutes or so for her to build up her confidence in him and for his beard to start coming back.  She and I were both relieved, just for different reasons. 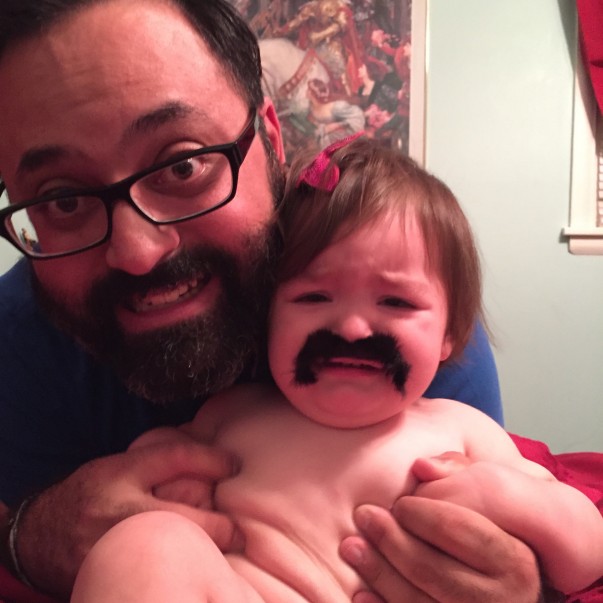 Mama Syd has claimed they look alike from the start! The night we tortured her with this, she promptly ripped the ‘stache from her face and tore it in half.  Then she turned towards Jac and spent a minute trying to pull his moustache off, too.