There was a late night grocery run this evening that overlapped bedtimes.  Gemma was pulled – sleeping – from her car seat and placed into the cart where she continued to sleep, sitting up, mouth open.  These girls and their current nap strike . . . *shakes head*

Yesterday a magazine with pumpkins painted like black cats arrived in the mail and Max couldn’t even string a sentence together to voice his outrage.

We are not ready for fall.  Not even close.  Yet, it is rushing up to us and bearing down on us at every corner and in the very air. It makes me Gemma-weaving-in-a-shopping-cart tired just thinking about it.

So I’ll tell you this story instead:

It turns out we have been negligent in our parenting in many, many ways.  For example, our kids don’t know how to flush a toilet.  Okay, okay, they know how just not when and they don’t do it very often.  It’s gross, I yell, nothing changes.  Se la vie and such.  Normally, it doesn’t really affect them, aside from my yelling, and they go on about their business.  But sometimes, sometimes . . .

Saturday, Tess met me in the hall.

“What isn’t?” I asked.  Always clarify.  And this was when I realized that the toilet was filling.

Then there was running and let me tell you, listless, swirling poo water rising dangerously close to the rim is NOT how one wants to start a Saturday morning.

I didn’t really need to ask – though I did – to know what had happened.  Multiple uses, an abundance of TP and no flushing. Now isn’t this story how YOU wanted to start the weekend?

I was rescued from a close encounter by Jac who attempted the plunger but the capacity was such that it did little aside  from sloshing aforementioned poo water all over the bathmat and floor.  Toilet water had to be ladled out and Philip and Tess were made to bear witness to the abomination that it was.  Mouths were covered, gags choked back, the works. It was traumatic.

In the end, most everyone ended up watching things unfold and Jac decided to do an overhaul on the toilet.  The kids watched as he scraped and cleaned and polished.  While it was riveting, I found other things to do.  That’s where Ellie found me.

“Mom, did dad scrape the poop from the bottom of the toilet?”

“No. No, that’s calcification.”

Her face showed shock then confusion of the highest order.

In the end, I literally had to spell it out to make it clear to her.  Then she join me in my laughter because that’s pure gold and so much better than poo water.

So much better. Here’s to a better Saturday and soaking up summer while we can. 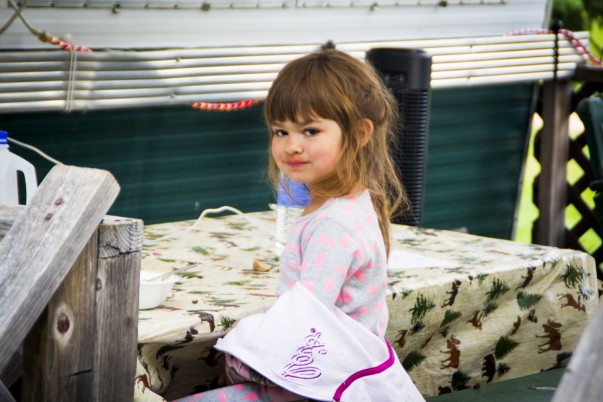