For many and sundry reasons, our kids have not frequented a doctor.  Yes, when sick, we take them in but they have to really, really need it.  This has resulted in a few unforeseen consequences.  First, they have no fear of needles as they don’t know what they are for.  “Shot” to them is what comes out of a gun (and with that sentence I have sealed our fate as red necks.  *sigh*). Second, for the few that can remember trips to the doctor, visits are recounted with much relish and listened to with awe.  “Tell about the time you had the surgery!” Lastly, the whole medical scene is mysterious and therefore fodder for the imagination.

Ellie received a doctors kit for Christmas because she so enjoyed playing doctor with her “favorite friend.”  It was used passionately for a while and then fell out of vogue.  The last few weeks, however, have seen a resurgence in the medical arts.  Lego tools have been constructed.  Possible ailments and surgeries have been carefully printed into notebooks and the downstairs has been turned into a hospital. I myself was canvased for any possible hiccups in my health and recommended to surgery.

“Don’t worry, mom, we’ll tell you what to do.  When it’s time, you go to the top of the stairs and wait there until Max tells you that you can come down.” Ellie patiently explained. “Then you have to sit on the couch and wait again until the doctor comes and says they can see you.  They will ask you what you need and then you have the surgery.” Here she gripped my arm and lowered her voice. “But not really.  Just pretend.”

Consequence four – they think the waiting is fun.  Hmmmm. . .

Though I was scheduled for a carpal tunnel surgery and informed that because Philip was the Physical Doctor (“That’s what PhD stands for,” Max announced) he would be my surgeon, I have yet to go under the knife.  It’s just so hard to find a convenient time for recovery, you know? But I’ve heard plenty of consultations, diagnosis, and surgeries.

My favorite came last week.  I watched Ellie come to the door of her room, notepad in hand.  She glanced at it, pen poised, and called loudly, “Maximilian Daniel?”  Max emerged from his room and she gave him a quick once over.  “This way, please, she said briskly, holding the door open and allowing him to go in first.  “Mmm-kay, what can I do for you today?” I heard her ask as she pulled up a stool.  “I need a tonsillectomy.” Max announced. “Allllriiiight,” she said, matter of fact and taking notes, “How do you spell that?”

Only the best care around here. 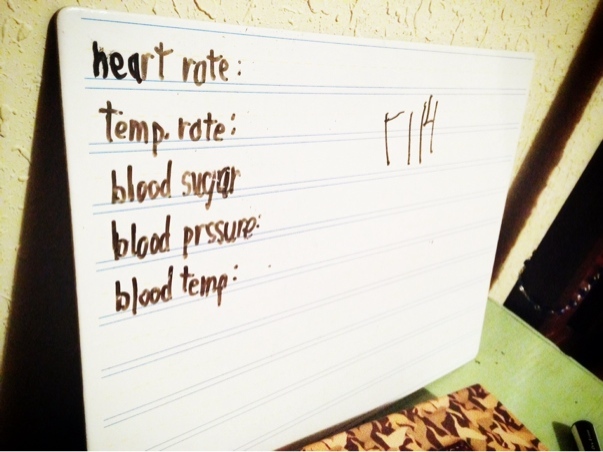