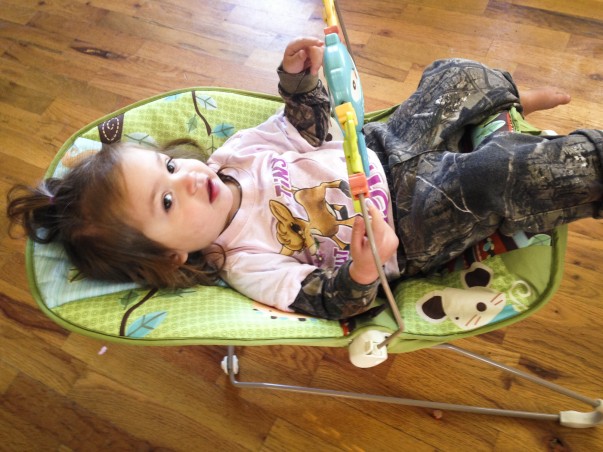 What are you supposed to do with a 2-year-old who is too smart for their own good?  I alternate between laughing uproariously at her antics and wanting to curl up in a fetal position and cry my eyes out.

She’s a spit fire but she’s also brilliant.  A dangerous combo, to be sure.

Thanksgiving week, shsure fell off the bench, hit her chin on the table and bit into her tongue.  She might have even bit all the way through it, we’re still not sure.  The screaming!  The yelling (from Papa Chris.  He was right there when it happened.  I was observing while nursing across the room.  So glad the Wyeth’s were here to help out and be a buffer.  It got tense FAST.)! The blood!  Oh, the blood . . .

Anyway, we were all terribly sorry for her and very accommodating and sympathetic. And rightly so.  It was awful.  But that was two months ago.  Sure, she has a lovely crescent shaped scar on her tongue, but 60+ days should erase much of the memory of a toddler, right?  Apparently not.  It started 2 weeks ago, any time she wanted something she knew she couldn’t have or wasn’t likely to receive.  “Tongue hurts!” she’d say in a piteously sad voice, making big eyes at us.  This was preempted by nothing but the memory that when she was hurt the same pronouncement moved the world.

Then there is the blaming.  She’s notorious for messes – no, DISASTERS – and all sorts of mischief making.  She’s been working on her “leave no trace” skills (i.e. pushing chairs back, turning the cookie plate back to it’s original position and the like) but there are times when she still leaves her mark.  When questioned about what happened, she has taken to saying, “Lucy did it.”

And today she started calling me Annie.  I don’t know where or how she picked it up because Jac and I don’t use each other’s names and we’re not usually in situations where she hears our names called out.  But here she is, yelling, “Annie!  Let in!  Potty bad!” and “Annie!  More cheese!” and “Annie!  Need tissue!”